Isaac Babel was a celebrated Russian author who penned short stories and plays from his experience and inspiration working as a long time journalist for various publications including his mentor Maxim Gorky. Literary critics such as Lionel Trilling have hailed Babels work as masterpieces of Soviet literature.

Gallows humour and master of the understatement were two traits that littered his work, indeed on the night of his arrest Isaac Babel was quoted as saying to the arresting officers "So, I guess you don’t get much sleep, do you?".

During the 1930's when Joseph Stalins grip onto power was tightening many writers changed their styles to suit the dictators whims, this led Babel to comment "I have become the master of a new genre: the genre of silence" as he withdrew more and more from publishing his works.

He liked to live dangerously, his long affair with Yevgenia Feigenberg who was the wife of the chief of the NKVD Nikolai Yezhov subjected him to being followed although not arrested.

Even during the bloody purge between 1936 and 1938 that Yezhov seemed to take pleasure out of, he remained free but under close scrutiny. In an ironic twist that you would expect to come from the pen of the great writer himself, Yezhov was arrested and implicated Babel as a co-conspirator and enemy of the state.

He became another victim of the great purge that was carried out by Yezhov's successor Lavrentiy Beria who sought and gained Joseph Stalins approval for Babel's trial and subsequent execution by gunshot. From the imagination of celebrated writers come some of the great one liners so this is my compilation of 15 of the best Isaac Babel quotes

The Russian critic Viktor Shklovskii spoke comparitively: "More has probably been written about Babel’s identity than about any other aspect of him"

The writer George Saunders reveals he is a source for inspiration: "When I read him, it recalibrates my ear. It reminds me of the difference between an OK sentence and a really masterful sentence. Babel does it for me"

The author Knut Andreas Grimstad was impressed to say: "With his harrowing experiences of the Russian-Polish campaign, Babel emerges as a reporter-of-the-senses beyond compare"

The literary critic Gabriele Annan looked back and said: "Babel witnessed the last battles ever to be fought on horseback and with sabres"

The writer James Salter summed him up thus:: "He has the three essentials of greatness: style, structure, and authority"

The author Jerome Charyn was gripped with intrigue by his writing: "Babel is dangerous; he disturbs our dreams. He’s cruel and tender, like some kind of crazy witch. Each of his best stories—“The King” or “Di Grasso” or “Guy de Maupassant”—is like a land mine and a lesson in writing; it explodes page after page with a wonder that’s so hard to pin down" 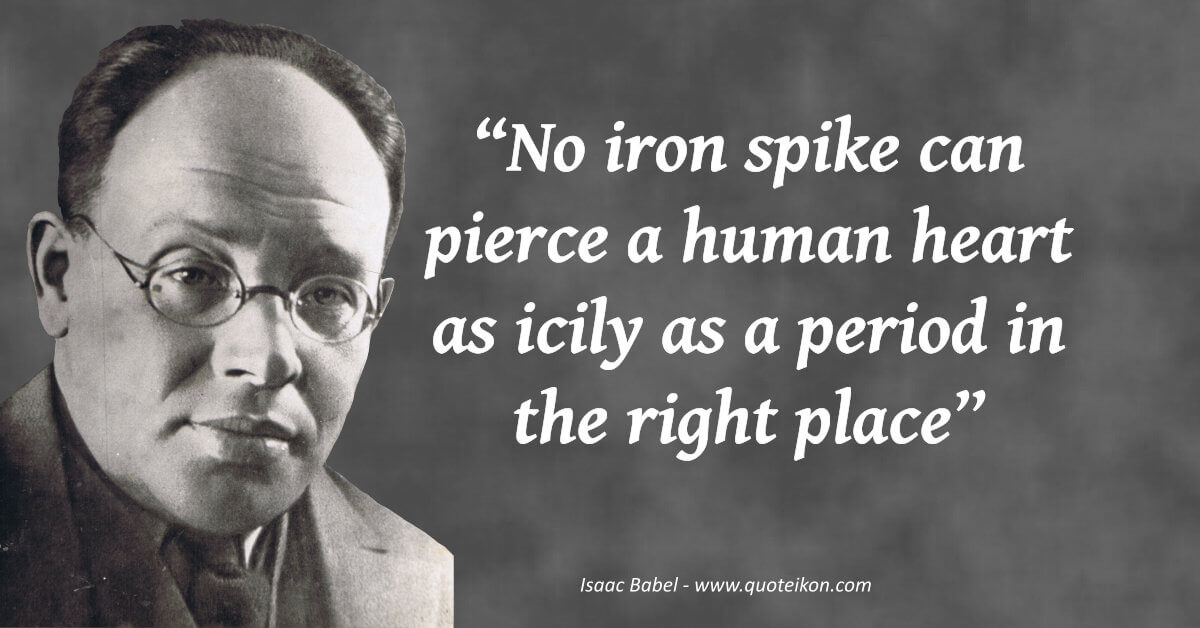