Like most African dictators Idi Amin came to power through the favoured method of a coup d'état as a bemused western world looked on with tired resignation about his prospects but still prepared to give this new leader his opportunity to shine as bright as a Lake Victoria sunrise.

Amin had a military history with the British and gained a reputation as a compliant soldier who would carry out orders with ruthless aplomb. Completely devoid of any education he still managed to climb the military ladder to positions way beyond his station mostly through loyalty and a brutal knack of "getting the job done".

Following on from independence from Britain in 1962 Amin rose to the rank of army commander by 1964 and then put down an army mutiny as he led the assault in The Battle of Mengo Hill where his forces routed the King of Buganda's soldiers and gave Amin a military mystique as a story perpetuated that he tore a path through the mutineers bullets and came through unscathed. This was the start of his belief he was chosen by god for a better purpose that would lead to eventual delusions of grandeur to guide him in his hours of need.

In 1971 with President Obote overseas at a conference in Singapore, Amin took advantage of his absence and led the coup d'état that took control of the country, Obote remained in exile and the Idi Amin reign of terror was about to begin.

He was greeted with ambivalence onto the world stage although this feeling quickly changed to bemusement and then belittlement as Idi Amin was lampooned as a buffoon for some eye brow raising statements he made on the international stage. At home and abroad he lacked any policy of substance as he concentrated on consolidating his position of power with purges taking out all of his enemies whether they were real or perceived. The Acholi and Langi tribes suffered most but every opposing voice whether political or military was quickly extinguished in a bloodbath that was to clog the Owen Falls hydro-electric Dam on Lake Victoria as the bodies accumulated faster than the crocodiles could eat them.

The escalating tensions were creating an increasing feeling of unease in the west that was compounded by Amin announcing the 55,000 Ugandan Asians on dual citizenships were to be expelled from the country, he accused them of sabotaging the economy and they were forced to flee for safer havens with the majority heading to the United Kingdom.

In 1976 Amin involved himself in terrorist activities when he allowed a hijacked Air France plane carrying 248 passengers to land at Entebbe airport. He made the mistake of showing support to the hijackers as he allowed them to move the hostages to a disused airport building where they were separated with the non Jewish passengers released and the hijackers demanding the release of 53 imprisoned terrorists under the threat of killing the remaining hostages. Seven days into the hijacking Israeli commandos landed covertly at Entebbe airport, routed Amin's troops standing guard, killed all seven hijackers, made good their escape route by destroying 11 MIG fighter planes and successfully freed all but one of the hostages. What was an ingenious and daring military raid for the Israeli's was a bitter humiliation for Amin with most rational countries heaping praise on the soldiers who carried out the raid.

Throughout his reign Amin did his upmost to antagonise his neighbour President Julius Nyrere of Tanzania trying to provoke a conflict, at one point during the war of words Amin challenged Nyrere to a boxing match in which he audaciously proposed to have Muhammad Ali as referee. Eventually Amin got his wish of war with Tanzania in 1979 but despite receiving support from Libya's Colonel Muammar Gaddafi the Tanzanian army defeated the Ugandans and as they marched into Kampala Amin was forced to flee to Libya. Amin eventually found sanctuary in Saudi Arabia where he spent his remaining days living in the top two floors of the Novotel Hotel in Jeddah.

As tin pot African dictators go Idi Amin was up there with the best of them, he styled himself as a "Conqueror of the British Empire" whom he delighted in deriding at every opportunity. His face to the world was of an affable buffoon whose comments brought much mirth and captured headlines at the expense of up to 500,000 Ugandan people who paid the ultimate price with their lives under his brutal regime. By expelling the Asians, who were the mainstay of the Ugandan economy, Amin set an African despot precedent that would later influence Robert Mugabe as he evicted the white farmers from their land that turned Zimbabwe, formerly known as the bread basket of Africa, into the basket case of Africa.

With Amin's penchant for publicity through his preposterous political proclamations he nurtured his persona into a president the tabloids loved to quote, which gave me the inspiration for this compilation of 18 of the best Idi Amin quotes.

A political analyst Gawaya Tegulle talked of Colonel Gaddafi's involvement in Ugandan affairs: "He influenced Idi Amin to stay on. He changed Idi Amin’s perspective greatly. He came back a changed man"

Former Ugandan President Milton Obote once called him: "the greatest brute an African mother has ever brought to life"

Lord Owen, the British foreign office minister at the time mused upon having Amin assassinated: "I actually at one stage did raise the issue of assassination and it was not just frowned on but looked on as an outrageous suggestion. I’m not ashamed of considering it, because his regime goes down in the scale of Pol Pot as one of the worst of all"

The former Ugandan Health Minister Henry Kyemba gave this startling revelation: "On several occasions he told me quite proudly that he had eaten the organs or flesh of his human victims"

Tanzania's president Julius Nyerere called him: "a murderer, a liar and a savage"

The East African correspondent John Nagenda summed him up thus: "He was a byword for cruelty, during his reign hundreds of thousands of people were killed"

The humorist Alan Coren shared this assessment: "After it was published about his monstrousness, I stopped writing about him. I did it when he was a buffoon. As more and more of his crimes became known, I chucked it in. I wonder myself if I ever found any of it funny, but it was rather different then. It was an optimistic time for Africa. The countries had got independence and were all doing fairly well"

The British broadcaster Sandy Gall described him thus: "Amin was a real gangster. Beneath that apparently jokey exterior there was a very nasty, brutal violent person who did tremendous damage to Uganda. He killed thousands of people. It was a rule of terror" 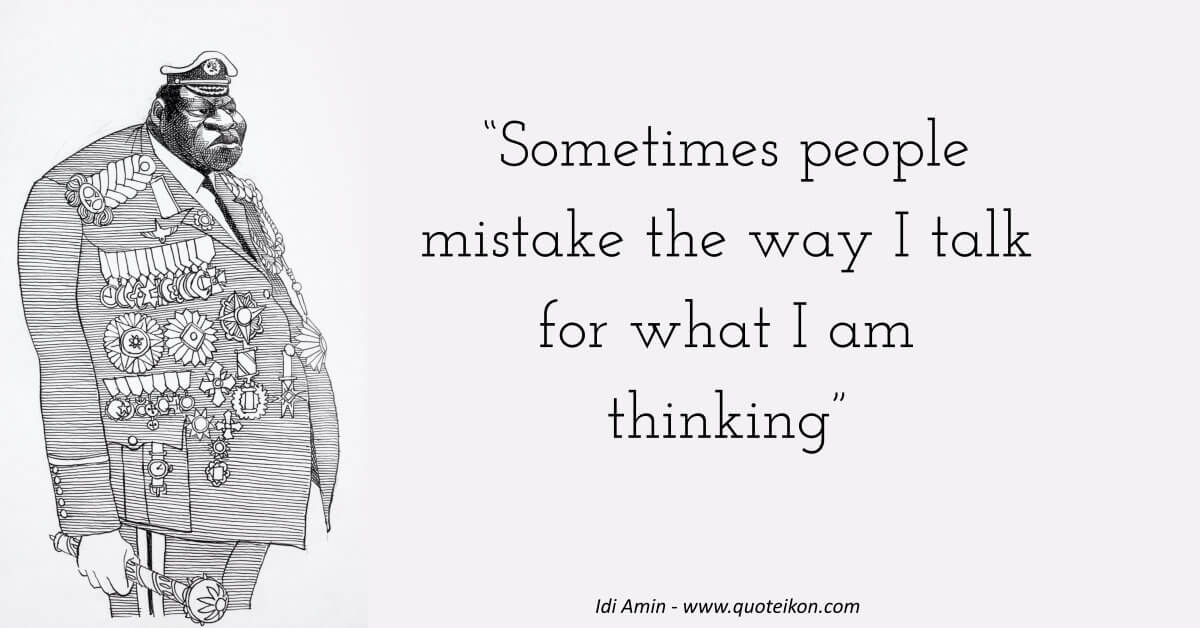