Standing out was never an issue for the diminutive in physical stature but larger than life Dolly Parton whose captivating smile beamed as wide as a Tennessean panorama and unleashed a voice so velvety and varied yet clear as a Smokey Mountain stream as she delivered her soaring ballads with the panache of a country girl completely at home in her music and enjoying every minute.

Dolly Parton has come a long way from the one room cabin where she grew up with 11 siblings in what can be described as an impoverished but happy upbringing surrounded by the musical influences of traditional Appalachian folk, country and bluegrass to the international fame and celebrity gained as she evolved through varied musical styles.

Showing a talent for singing she started performing on the local radio at the age of 10 and steadily progressed cutting her first record at the age of 13 and after graduation she left home to pursue her dream career as a singer in Nashville. Initially she was writing songs and when Bill Phillips recorded her song "Put It Off Until Tomorrow" with Dolly on backing vocals it was an instant hit climbing to Number Six in the Country Chart in 1966.

After this things moved quickly and she was signed up to for a regular slot on the Porter Wagoner show and after proving herself to be quite the entertainer Dolly Parton signed her first record deal with RCA in 1967. Wagoner and Parton released a string of duets together and she started recording her own solo records without success until the 1971 release of "Joshua" which was her first Number One single. Her next big hit was "Jolene" in 1973 which also went to Number One in the Country Charts and even made it into the Billboard top 100. By 1974 Dolly had eclipsed Porter Wagoner and she left the show and went solo although they remained firm friends and still cut a few more duets together.

In 1974 Elvis Presley made an enquiry to sing Parton's song "I Will Always Love You" in a duet with her and as much as she wanted to accept she could not because The Kings manager pointed out a contract with Elvis would mean giving up 50% of royalties on a song that was already credited to Dolly, so she reluctantly refused.

As a solo artist Dolly Parton's rise continued as she accumulated numerous chart hits and starred in her own TV show simply called "Dolly" which proved so successful the natural career progression to Hollywood was beckoning and she obliged by starring in the 1980 hit movie "9 To 5". Not just a hit movie, Dolly sang the theme for "9 To 5" which made it to Number One on both the Country and the Pop charts.

In 1983 she was in the recording studios with Kenny Rogers as they released their duet "Islands In The Stream" that was a major hit all around the world and Dolly it seemed was at the height of her fame.

After successfully making the transition from Country music to Pop music Dolly Parton decided in the late eighties to take her music back to her roots as she started recording Bluegrass music in a bid to rekindle her love for the genre of music she grew up on. To much critical acclaim she released "Trio" in 1987 which was a collaboration with Emmylou Harris and Linda Ronstadt that reached Number One in the Country charts. Dolly was back in her element so she continued to release the songs including an album of Bluegrass versions featuring hits like John Lennon's "Imagine" and Led Zeppelins "Stairway To Heaven".

Away from the recording studio Parton was a very shrewd business lady as she opened numerous successful ventures in her home state of Tennessee including one the the most visited tourist attractions in the state, her theme park aptly named "Dollywood".

Throughout her career her warm personality has always been at the front of everything she did, she used humour in a self deprecating fashion that brought her humbleness to the fore and once successful she never forgot her roots as Dolly Parton used philanthropy, mainly though her charitable Dollywood Foundation, to bring jobs and improved education back to her home state of Tennessee.

Her many talents went beyond her singing as beneath her sultry soprano tones lay a skilled songwriter that wrote "I Will Always Love You" long before Whitney Houston scaled the upper octaves with it in the 1992 movie "The Bodyguard". In her 50 plus year career she has amassed a catalogue of work that includes over 3,000 compositions with 25 songs that reached the top of the charts, there have been Grammy's, Golden Globes and Academy Award nominations as Dolly turned every opportunity into a success whether it be in the recording studio or on the big screen. Away from the spotlight she has always been the Tennessee country girl with a kind heart and eternally ready with a kind word to say too, she was good for a one liner also so this is my compilation of 20 of the best Dolly Parton quotes.

Kenny Rogers put the record straight about the affair that never was: "Everyone thinks Dolly and I had an affair. We just flirted with each other for 30 years in front of the nation"

The singer Bjork was impressed to say: "Dolly’s big in Iceland. Her voice is immaculate, really powerful. Her character is so warm and human, and she has a great sense of humor. All my friends love Dolly, and most of them are people who would never listen to country music. It doesn’t happen very often when you get a character that is sort of larger than life"

The critic Roger Ebert shared this observation: "What Dolly did was to come in with her brash, unaffected personality and sweep away all that paranoia in a rush of good will. It left everybody standing around afterward feeling a little goofy"

The singer LeAnn Rimes was inspired to say: "Dolly made me realize that there are endless possibilities when communicating with your voice"

The critic Gene Siskel felt her presence: "This will sound crazy, but when I was interviewing Dolly Parton, I almost felt like she had healing powers" 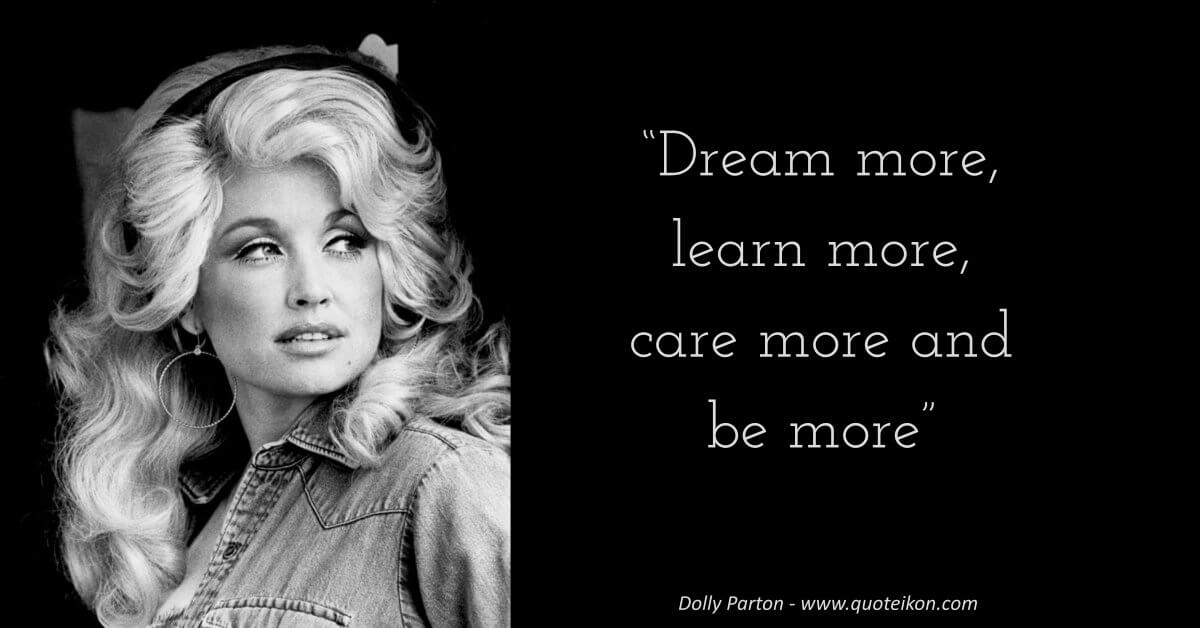