After three centuries of the dark ages in Europe, a boy was born in 742ad who was destined to become the greatest king Europe had known. His prowess in the theatre of war was legendary whilst his politics was shrewd but ruthless. His name was Charlemagne, who many called the Father Of Europe and he was the founder of the Carolingian Empire.

Charlemagne was the first leader since the fall of the Roman Empire to achieve a unifying rule across most of Western Europe. His modus operandi of supreme jurisdiction in all matters of state, military and religion paved the way for all future European empire builders to draw inspiration from his methodology to achieve greater dictatorships.

Europe at this time was fragmented by tribal rulers whose brutal savagery was inverse to their lack of foresight and poor organisation. An opportunity was there for the taking for an ambitious leader like Charlemagne who was equipped with the military strategies to satisfy his lust for power and domination.

After the death of his father Pepin the Short, Charlemagne became King of the Franks in a shared rule with his brother Carloman. The sibling dual monarchs lasted for 3 years until Carloman's sudden and unexpected death in 771ad. With his hands firmly on the reins of power Charlemagne began to look wantonly beyond the Frankish borders and planned accordingly.

For the next 30 years Charlemagne was in a perpetual war across multiple European fronts as he expanded his power base by conquering the kingdom of the Lombard's in northern Italy, northern Spain, Bohemia and Saxony to the east.

It was a blood thirsty campaign both on and off the fields of war as the vanquished survivors were expected to convert to Roman catholicism or face execution. In one infamous incident he oversaw the "Massacre of Verden" where 4,500 Saxons were decapitated for refusing to convert to Christianity. On 10th July 774 he was crowned the King Of The Lombard's and by the turn of the century he even gained the title of the First Holy Roman Emperor such was the extent of his power base and allegiance to the papacy.

He was equally adept as an administrator as he was a general strategising his military tactics. The wide ranging reforms implemented by Charlemagne became appreciated by the people of Europe as he allowed the peasant class to participate in trade and commerce. The people under the auspices of his rule prospered as trade became easier under a single silver currency.

His legal reforms were stern when it came to religion but he was smart enough to allow local laws to be respected in each of his conquered territories. He standardised language and introduced education which would use Latin as its basic form of learning and communication.

The standardisation continued with money, weights, measures and taxes all coming into line across his territories. Accounting practices were refined and documented in the 802ad manuscript the "Capitulare de villis" which dealt with how to managed lands, livestock, justice and the important details of how to strictly record state income and expenses.

As a soldier he led from the front and he cut an intimidating figure as he stood at 6' 4" (1.93m) which was far taller than the nutritionally deprived enemies he faced on the battlefield who averaged about 5' 5" (1.65m). Charlemagne was a veteran of more than 50 battles, he made great advancements in siege technologies and his logistics was state of the art for its day.

Charlemagne surrounded himself with educated people and encouraged art and literature for which history has rewarded his contribution to the people with the term the "Carolingian Renaissance" which was the first of the three great medieval renaissances. As a ruler he was well respected and he tried to be fair to his subjects once they came under his dominion.

The legacy of Charlemagne became an inspiration for dictators all the way through to the 21st century as he inspired Napoleon Bonaparte, Adolf Hitler and the elites of the European Union. He was an empire builder who used his military leadership to conquer and his political nous to rule.

He was also the emperor who ensured the survival of christianity and the geographical area under his jurisdiction would later became known as the Holy Roman Empire.

The exploits of Charlemagne are still revered in mainland Europe and he is often exemplified as the original ambassador of European unity and culture. Being a French king of Germanic stock he will forever remain as the ultimate symbol of pan-European cohesion. He also made some memorable speeches and was good for a one liner so this is my compilation of 17 of the best Charlemagne quotes.

The writer Walahfrid recognised his wisdom when he said: "Charles was the keenest of all kings to seek out and support wise men so that they might philosophize with all delight. Almost all of the kingdom entrusted to him by God was so foggy and almost blind, but he made it luminous with the new ray of knowledge, almost unknown to this barbarous land"

The monk Bobbio said mournfully at the time: "From the lands where the sun rises to western shores, people are crying and wailing ... the Franks, the Romans, all Christians, are stung with mourning and great worry ... the young and old, glorious nobles, all lament the loss of their Caesar"

The biographer Einhard got straight to the point by describing him thus: "The most famous and greatest of men"

French President Valéry Giscard d’Estaing was quoted to say at an EU meeting held in Aachen: "Perhaps when we discussed monetary problems, the spirit of Charlemagne brooded over us" 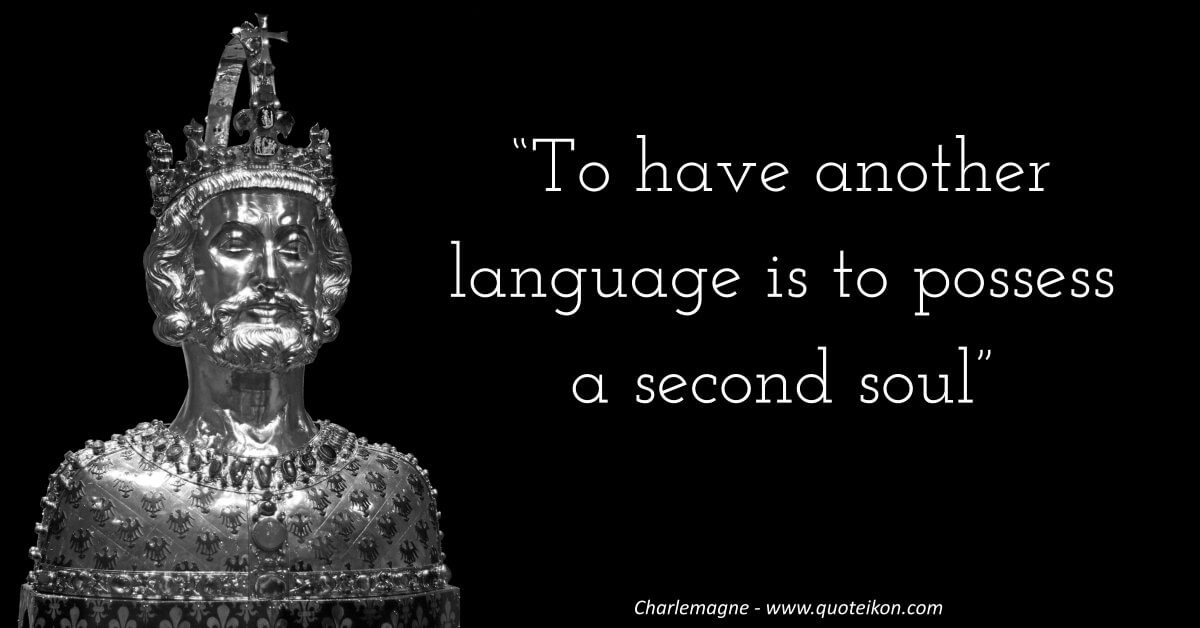