Butterfly McQueen was originally a dancer that later progressed to acting roles on the silver screen and eventually to television. She was a member of the world renowned Katherine Dunham dance troupe and she remained good friends with Katherine for her entire life.

She was born Thelma McQueen but she did not like the name so she had it legally changed to Butterfly, Butterfly was a nickname she earned because of the rapid hand movements she used during dance routines.

Her most famous role was that of Prissy in Gone With The Wind where her high pitched voice stood out as she played a maid to Scarlett O' Hara. In this epic movie she shared the screen with Hollywood legends such as Clark Gable, Vivien Leigh and Olivia de Havilland and although she accrued critical acclaim, it did not lead to the glittering subsequent roles her acting prowess deserved as they never materialised in an era shamed by the skin colour being a major factor in securing box office dollars.

Butterfly McQueen appeared in another 1939 hit movie called The Women where she played the role of Lulu, a perfume counter maid. This was an unusual movie because the entire cast was female and although it did not receive any academy nominations it is still highly regarded as one of the best movies in a year that was one of the golden era of Hollywoods best ever.

McQueen never married or had children and she died alone in tragic circumstances in a fire at her home in Augusta in 1995 aged 84. Butterfly McQueen was a modest actress and kept her private life to herself as no one in her community realised about her acting past, despite this she did come out with some memorable one liners and I have compiled this list of 18 of the best Butterfly McQueen quotes.

The critic Wesley Morris wrote of her GWTW role of Prissy: "Butterfly McQueen is giving the same high-strung performance as Vivien Leigh. To see McQueen falling down and squawking is to think there really isn’t a huge difference between her dithering emotionalism and Scarlett’s, except that Prissy is written as a fool and Scarlett as a superhero"

The film historian Donald Bogle shared this observation: "Her comedic gifts were too special and delicate, too unique a blending of the comic and the pathetic, to be effective. With her large, expressive eyes, her bewildered and perplexed stare, and her quivering tremor of a voice, she seemed almost otherworldly"

The author Michele Wallace was quoted as saying: "McQueen never got the work nor the credit she deserved" 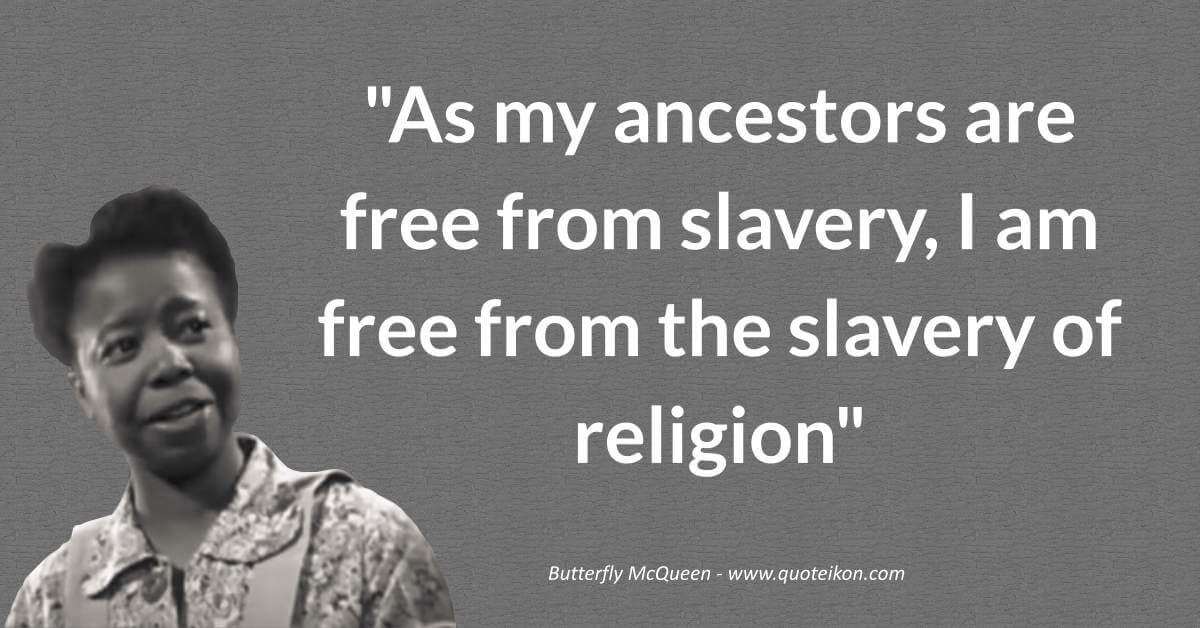