Imagine being given the task to "boldly go where no man has gone before" and be the first person to "cross the final frontier". Yuri Gagarin was the Soviet cosmonaut who could literally lay claim to these phrases as he successfully became the first man to enter deep space on 12th April 1961.

Upon his safe return to earth after completing a full orbit of the earth Yuri Gagarin became an over night legend who the whole world was to celebrate as a hero with even the Americans congratulating him, albeit through clenched teeth. His fan mail rose into the millions, he had a charismatic smile so slick it could sell ice to the Siberians. Gagarin was the PR coup of the century for the Soviet Union and the suits in The Kremlin were determined to milk it.

His Vostok 1 spacecraft was the vehicle he piloted into the history books to become the first man in space, but this rocket was actually an adapted R-7 Semyorka missile. The chief designer of the Soviet space programme, Sergei Korolev, had first successfully launched the R-7 rocket on 21st August 1957. It was the first inter continental ballistic missile and it traversed some 4,000 miles from the Baikonur Cosmodrome in southern Kazakhstan to the Kamchatka peninsula in the eastern reaches of the Soviet empire.

This continental ballistic missile launch was successful 15 months before the U.S. could achieve the same and the Soviets dealt a further body blow to American aspirations to conquer space with the launch of Sputnik 1 on 4th October 1957. Sputnik 1 was the first satellite in space, it became a symbol that intensified Cold War relations between the two super powers and the Americans were feeling the heat of Soviet technological advancement.

With Sergei Korolev at the helm of the Soviet space programme they were not content with standing still, the Russians began sending unmanned rockets into space and eventually animals. Their sights were set much higher than this as they had plans afoot for the first manned space flight and were actively scouring air force bases for suitable candidates. Most failed the stringent vetting process, a handful of ace fighter pilots were chosen for further tests but this list soon got whittled down when it became apparent that the Vostok capsule was so small only a pilot below 5' 6" could take its controls.

There were two prime candidates; Gherman Titov and Yuri Gagarin. Both pilots excelled in all tests. Titov was confident of being chosen because of his privileged education. He came from a middle class background with his parents both academics whereas Gagarin was from poor peasant stock. Gagarin had an ally unbeknown to him. The leader of the Communist Party, Nikita Khrushchev, was also from a lowly peasant background and he looked at the positive political image, for both himself and the Soviet Union, if the first man into space was a peasant. The Soviet public relations team could portray a story to rival The American Dream. It would be quite the coup to show the world that a peasant could work hard, get to the top of his profession and be the first man in space. This had the added benefit of substantiating Khrushchev's rise to power from his own humble origins, so Gagarin got the opportunity to rewrite history.

For all his brilliant piloting skills, the boffins behind the space programme had no way of knowing if Gagarin would be either alive or in a fit state to pilot the flight during the state of weightlessness once free of the earths atmosphere. So it was decided Vostok 1 would be controlled by both automatic systems and ground control. In case of an emergency Yuri was given an unlock code if manual operation was deemed necessary. He was also given 10 days supply of food in the case of total propulsion failure as this was the time it was thought it would take the spacecraft to drift back to earth.

There were more misgivings for the brave pilot to overcome during re-entry into the earths atmosphere. The spacecraft was not equipped to ensure a soft landing, Gagarin was expected to eject from the capsule when about 4 miles above the surface of the earth and parachute back to terrafirma somewhere, it was estimated, over the Soviet Union.

The launch went well and the rocket breached the earths atmosphere to enter space. After one earth orbit the descent was to begin but there was a problem. The service module carrying Gagarin failed to fully detach itself from the space craft, one cable was still attached so both vessels were buffeting each other whilst plummeting to earth through red hot temperatures. After a tense few minutes, that must have felt like hours to a barely conscious Gagarin, the cable burnt away and the capsule was released to hurtle freely back down to earth. Gagarin regained his senses and at the appropriate time pressed the ejector button and he parachuted safely into a farm in Smelovka, Southern Russia.

This was the moment in time when the Soviets really upped the ante in the space race, it was the height of the Cold War and they were streets ahead of the Americans in the race for outer space, but the U.S. response was swift. In a speech by John F. Kennedy on 25th May 1961 the President lay down the goal of a manned flight to the moon before the end of the decade and the space race was ratcheted up a few more gears.

Yuri Gagarin became a international celebrity who embarked on a world tour that saw him visit more than thirty countries with one notable exception. President Kennedy had barred him entry to the U.S.. Everywhere else he was welcomed with open arms. Gagarin was a slick operator who dazzled in the public eye and impressed in diplomatic circles.

Gagarin was increasingly seen as the most important Soviet figure outside the upper echelons of The Kremlin. Government officials were awash with discouragement to stop Yuri risking his life in another space flight or indeed an air force flight. However for all the concerns about this hero of the Soviet Union it was his love of flying that brought him fame, adoration and an untimely death.

Gagarin died prematurely in an air crash while flying a MIG on 27th March 1968 prompting many crackpot suggestions surrounding his death. However the conspiracy theorists overlook the fact that Gagarin was withdrawn from the space programme after the death of Vladimir Komarov during the inaugural flight of Soyez 1. Yuri was the Soyez back up pilot, so his withdrawal was for his protection because he was far too important for the Kremlin in the propaganda war with the west. It was very very clear they needed him alive.

As a true Soviet hero his ashes were interred in the walls of the Kremlin Necropolis and his name will always be honoured in the annals of history as the man who dared to take that first flight into outer space. When legends speak the whole world listens and he was very good for a one liner, so this is my compilation of 18 of the best Yuri Gagarin quotes

Colonel Valentin Vasilyevich was praiseful with his words: "Yuri Alekseyevich was a unique person: he never boasted of his fame. When you turned to him, he’d see and hear no one but you"

The Soviet leader Nikita Khrushchev once referenced to Yuri when setting the agenda for anti-religious propaganda: "Why are you clinging to God? Here Gagarin flew into space and didn’t see God"

The Soviet scientist A.N. Nesmeyanov was inspired by his achievement: "Everything is symbolic in this achievement. The fact that the first cosmonaut is a Soviet citizen, the fact that the first cosmic spaceship carrying Major Gagarin was named 'Vostok,' which means East or Dawn, and also the fact that the flight was completed in the morning, these are all symbolic. So this morning became the morning of a new era. From now on the day of April 12, 1961, will be connected with the achievement which was accomplished by Yuri Alekseyevitch Gagarin. The entire flight around the Earth was completed in 108 minutes, and these minutes shook the world"

Space journalist Vladimir Gubarev said this of him: "For 10 whole minutes of his flight, he thought he was dead. The flight was absolutely heroic. It was unimaginably difficult. People thought a man might go crazy in space"

Vostok engineer Georgy Grechko paid tribute to his bravery by saying: "When I dream now, it is mostly nightmares about the descent. When the craft re-enters the thick levels of the Earth's atmosphere, it burns. The flames tear at the craft. It rolls and the coating melts. It's scary"

Movie director Christopher Riley was moved to make a movie called 'First Orbit': "What Gagarin did is something of galactic significance, and it needs marking in some way other than crackly, black-and-white footage" 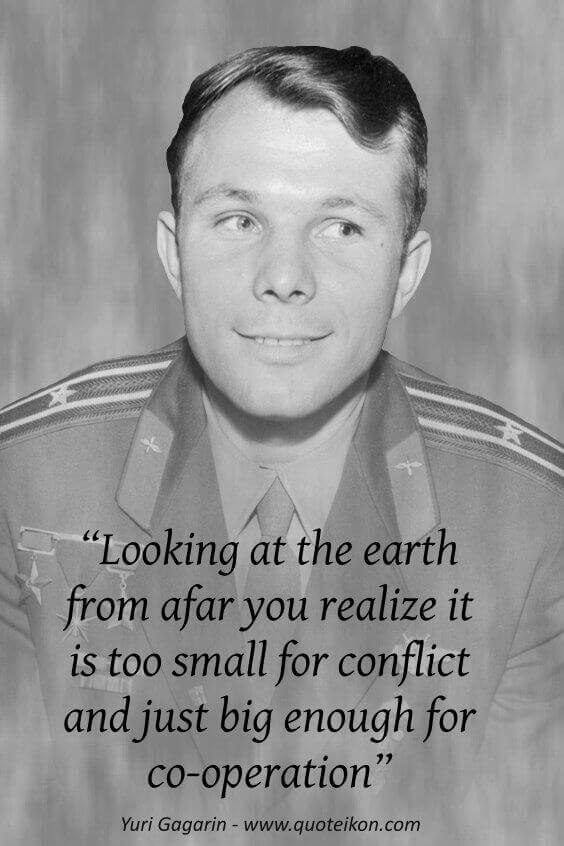