In the aftermath of a war where millions lost their lives it can at first thought seem disrespectful to concentrate on the great loss of any one life in particular but, when that one life is Wilfred Owen the poet, who became the voice from the trenches it can be seen through his actions that he wrote for every soldier on both sides of the wire.

Owen fought and lived the war witnessing and writing about a man made hell on earth where the suffering of silence had been the voice of the unknown soldier for too long. Owen won a medal for capturing a German machine gun post and inflicted heavy losses on the enemy but for all the bravado of the soldier he still had it in his soul to write this line: "I am the enemy you killed, my friend" in the poem "Strange Meeting".

There is an aura of mystique about the revered war poets that evokes a range of emotions so broad it captivates the heart from whatever direction the mind had been leaning. Wilfred's early influences were the romantic poets such as Keats, Lord Byron and Shelley who all died at a relatively young age prompting literary sadness for their forever unwritten words.

In much the same way Wilfred Owens' early demise elevated his standing as a war poet to become the voice of a lost generation with two of his most poignant poems: "Anthem for Doomed Youth" and "Dulce et Decorum Est" leading the way.

After recovering from his war injuries Wilfred did not have to return to the front line but he chose to, he was a poet on a mission who had to be as close to the action for his poetry to have that cutting edge realism which his honour demanded. Wilfred Owen was cut down by machine gun fire just seven days before the armistice was signed and the guns fell silent.

Heaven gained a poet extraordinaire whilst amongst the ashes of war rose his words into literary immortality. Wilfred Owen gave meaning where there was none, criticised where there was silence yet he walked bravely where generals feared to tread.

Wilfred Owen's poignant words struck a chord with the families of a generation lost, whose relatives were left grieving their sons and brothers whilst governments contented themselves in their games of war played out by their subjects in fields of mud and blood. It was a far cry from the cigar stained corridors of power where politicians ears could not be pierced by the dying screams of someones son.

His poetic output summed up the futility of war and reading some of his letters home was heart breaking, some of which have inspired my to create this compilation of 17 of the best Wilfred Owen quotes.

His friend and fellow war poet Siegfried Sassoon played down his influence by saying: "I stimulated him towards writing with compassionate and challenging realism.... My encouragement was opportune, and can claim to have given him a lively incentive during his rapid advance to self-revelation"

Siegfried Sassoon spoke mournfully of him: "Wilfred's death was an unhealed wound, and the ache of it has been with me ever since"

Siegfried Sassoon went on to add: "All that was strongest in Wilfred Owen survives in his poems"

The historian Jeremy Paxman called him: "For me, he is the greatest of all the war poets"

The poet Robert Graves once said to him reassuringly: "Don't make any mistake Owen, you are a damned fine poet already and are going to be more so" 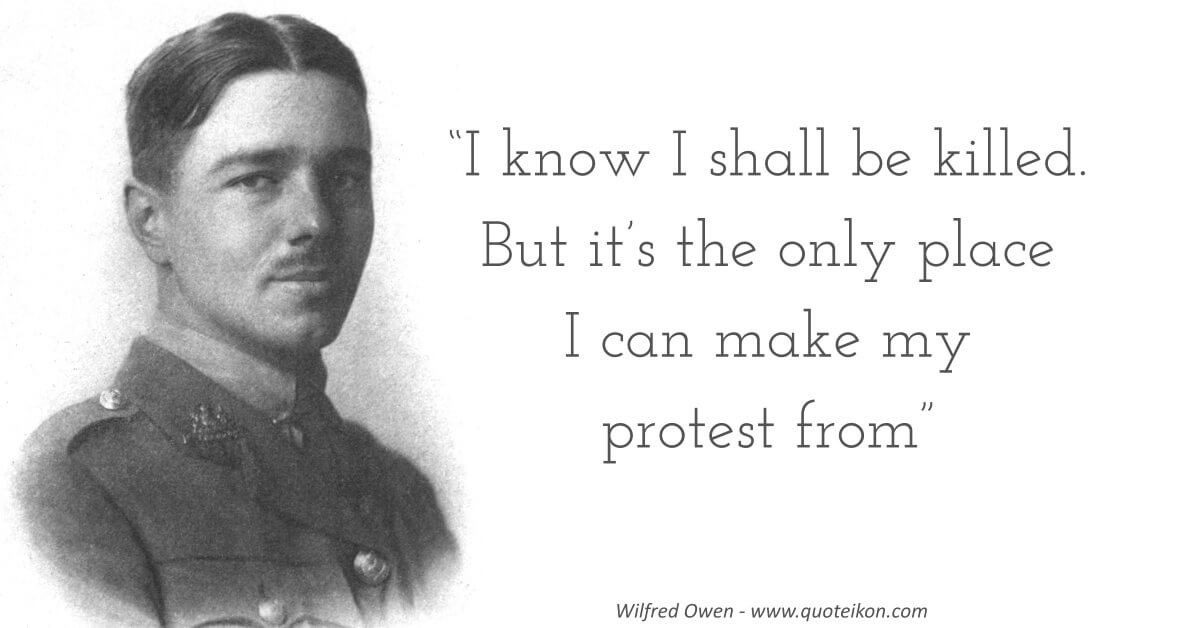