He was the Persian poet whose immersion in mysticism traversed the barriers of eastern and western literature. A cultural icon whose spiritual legacy has been translated across the globe to appreciative eyes from the Mekong to the Mississippi. His name is Rumi, the Sufi master whose writing helped transcend the ethics of religious conformity and ethnic division.

The success of Rumi, when measured against the barometer of time is remarkable. Considering it is nearly 800 years since Rumi first placed his poetic quill to parchment his popularity is showing no sign of waning.

Today, his wisdom resonates with exuberant beauty across the internet. Translations of his poetry adorn the shelves of best selling book lists whilst superstars of modern culture form a seemingly endless line to recite his works.

Rumi is often cited as the best selling poet in the U.S.A despite the fact that the America's were still waiting to be "discovered" when he started his poetic output back in 1248. Before his transformation to mystic poet, Rumi was a respected Islamic jurist and scholar. It was his meeting with Shams-e Tabrizi that would forever change his outlook on life.

Rumi first met Shams-e Tabrizi on 15th November 1244. It was a meeting of minds that benefitted both parties. Tabrizi was a truth seeker, a wandering dervish whose spirituality formed a salient viewpoint that fascinated Rumi to inspired introspection.

Their meeting sparked an intense three years of intellectual entwinement that saw Shams become both a mentor and a devotee of Rumi. However, one day the mentor was there and the next he was gone, never to return. Speculation ensued as to the demise of Shams-e Tabrizi with some believing he was murdered.

The abrupt absence of Tabrizi left a profound vacuum in the mind of Rumi. It was a void of grief too deep to put into words, yet, Rumi found solace by putting poetic words into this bottomless chasm in his mind.

The outpouring of verse was immense. The Persian language, although steeped in a tradition of brilliant literature, became a torrent of tantalising mysticism that was universal in nature with an emphasis on love yet deeply Islamic in origin.

The Mathnawi and the Diwan are his most notable works that consists of two epic poems. Rumi drew inspiration from Shams-e Tabrizi to write the Diwan and it took in excess of 40,000 verses to quell the feelings of grief towards his friend. The Mathnawi spanned six books of intricate poetry detailed across some 25,000 verses.

Epic poetry is always long on quantity but can leave question marks on quality. The imaginative outpourings of Rumi negate any such notions as the critical acclaim followed the translations of his work around the globe with a familiar echo of universal ebullience.

Critical acclaim in the twenty-first century is a far cry from the early life of Rumi. Marauding Mongol hordes presented a real world problem that prompted the family to relocate further west across the Persian empire. The family stayed in Baghdad then Karaman and eventually settled in Konya in what is now the modern day Turkey.

Rumi followed in his fathers footsteps in a long tradition of preaching the Islamic faith. He had studied Sufism, the Shariah and the Tariqa, so he was well positioned for a role in public life. He married twice and was blessed with four children, two sons by his first marriage to Gowhar Khatun and a son and daughter by his second wife Kerra Khatun.

The Sufi poet was not only a mystic as he lived a reasoned life with equanimity that still maintained his Islamic faith. It was this philosophic ingenuity that led him to promote the notion that music, art, poetry and dance are spiritual resources on a par with theology. Rumi combined all the arts with an undercurrent of love that has enshrined his position as a multi cultural icon of worldwide significance.

Although his place in the pantheon of global literature is deservedly secured, some still question the westernised version of Rumi that seemingly ignores the Islamic roots that partly inspired the creative streak inside the mind of the mystic poet. His elevation to the league of Dante and Shakespeare seems somewhat hollow without the acknowledgement of his Islamic identity. The sleight of hand that holds the translated pen can easily incorporate spiritual colonialism with a deft touch that maintains the content with liberal context of use that transforms the narrative. So much more palatable to the market.

Nevertheless, the brilliance of Rumi is not disputed. Universal love is a mainstay of his cosmopolitan outlook that has remained so appealling from its initial conception up until the present day.

The passionate poetry of this Sufi mystic has stood the test of time and bestowed deep meaning to countless generations of readers appreciative of the words of wisdom shared by this giant of Persian literature. Great writers garner great influence which motivated me to create this compilation of 21 of the best Rumi quotes.

The Emeritus Professor of Psychology at Copenhagen university Gretty Mirdal described his philosophy thus: "it is based on certain key attitudes, so-called attitudinal foundations: being non-judgmental and accepting or observing without evaluation; being patient; having “a beginner’s mind"

Professor Majid M. Naini shared this anecdote: "Rumi's life and transformation provide true testimony and proof that people of all religions and backgrounds can live together in peace and harmony. Rumi’s visions, words, and life teach us how to reach inner peace and happiness so we can finally stop the continual stream of hostility and hatred and achieve true global peace and harmony"

The author Reynold Alleyne Nicholson described him thus: "Strange as it may seem to our Western egoism, the prospect of sharing in the general, impersonal immortality of the human soul kindles in the Sufi an enthusiasm as deep and triumphant as that of the most ardent believer in a personal life continuing beyond the grave. Jalaluddin, after describing the evolution of man in the material world and anticipating his further growth in the spiritual universe, utters a heartfelt prayer - for what? - for self-annihilation in the ocean of the Godhead."

The author Shahram Shiva recognised his universality: "Rumi is able to verbalise the highly personal and often confusing world of personal growth and development in a very clear and direct fashion. He does not offend anyone, and he includes everyone.... Today Rumi's poems can be heard in churches, synagogues, Zen monasteries, as well as in the downtown New York art/performance/music scene"

The Lebanese writer Nadim Naaman shared this assessment: "Rumi managed to latch on to themes and feelings that can apply to everyone. He’s managed to do that because his focus is on self-reflection"

The composer Dana Al Fardan spoke of his focus on human inner nature: "His entire ideology is based on cultivating the essence within"

The author Brad Gooch gave this simple assessment: "He’s a poet of joy and of love"

The writer Lee Briccetti shared her opinion of the poet: "Across time, place and culture, Rumi's poems articulate what it feels like to be alive" 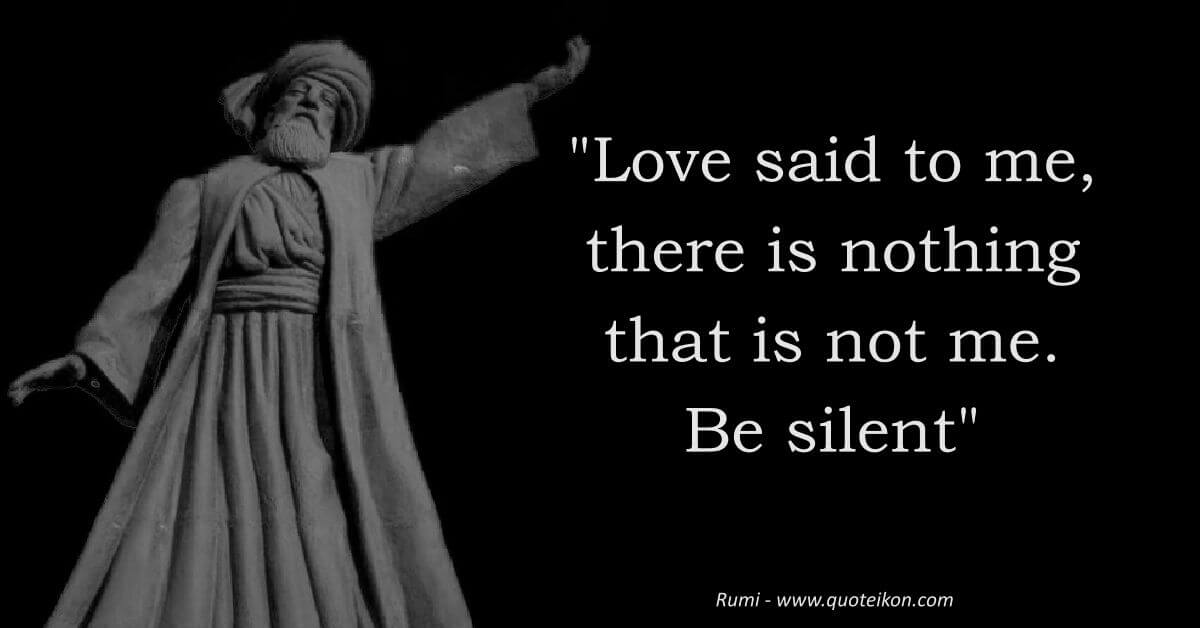