Few people have merged the upper echelons of the fashion industry with the status of becoming the greatest rock and roll muse to two of the music industries most creative and legendary musicians. Pattie Boyd managed to traverse the tricky path of gracing the front covers of Vogue and Vanity Fair with marrying into the height of Beatlemania and eventually a Ménage à trois as Eric Clapton was in hot pursuit.

Beatle George Harrison and guitar legend Eric Clapton both famously wrote touching odes to Pattie as they nailed their unmitigated love for the queen of the rock chic's in songs that would immortalise her forever.

Boyd had an uncanny knack of providing the inspiration that lit the creative spark within both musical legends that gave her the status of rock's most legendary muse.

In some respects Pattie's influence in the late 60's probably spread further than just George as she was responsible for introducing transcendental meditation to The Beatles and encouraged John Lennon and Paul McCartney to attend a 1967 lecture by Maharishi Mahesh Yogi at the Hilton Hotel in London.

There was far more to Pattie than inspiring rock legends as she went from being the subject of the camera lens to actually shooting the pictures and she went on to enjoy a successful career as a photographer.

As you would expect from such a colourful character she was good for a one liner also, so this is my compilation of 15 of the best Pattie Boyd quotes

How George Harrison first tried to approach Pattie: "Will you marry me?... Well, if you won't marry me, will you have dinner with me tonight?"

Eric Clapton looked back with this observation: "I was desperately obsessed with Pattie, but creating a song is just putting a stamp on a feeling"

Author Anthony Haden-Guest described her as: "A swirl of miniskirt, beneath which limbs flicker like jackknives and glimmer like trout" 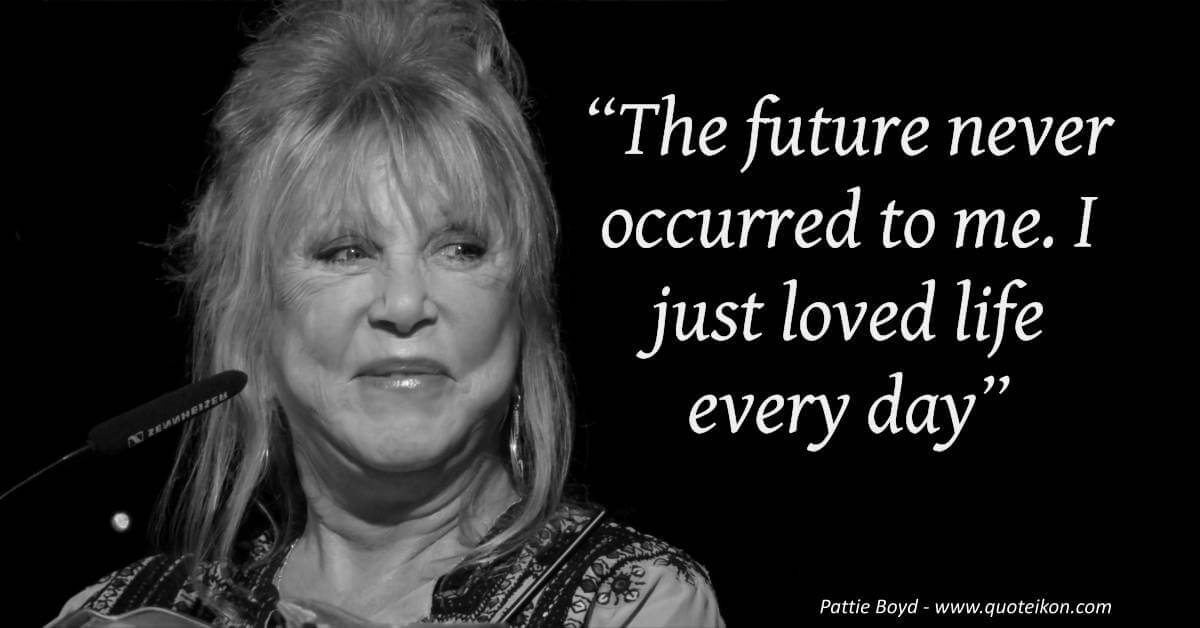