In 1919 Lady Astor was not the first elected female MP, this distinguished accolade went to revolutionary suffragist Constance Markievicz who was elected to parliament one year earlier in 1918. But, as an active Irish member of Sinn Fein, she refused to take the oath to enter parliament and she just happened to be residing at her majesties pleasure in London's Holloway Prison at the time and was pre-occupied with a death sentence that was eventually commuted to life imprisonment for her role in the 1916 Easter rising

Nancy Astor was not just the symbolically important torch bearer of women's politics, she broke the mould of parliamentary male dominance by taking up the mantle of focus on women's issues at the expense of internal party politics. By her own admittance, she had no history in the pre-WWI suffrage campaign, yet she proved a worthy parliamentary adversary to the patriarchal dominance so typical of 1920's Westminster.

Between the wars she became the stand-out celebrity female politician much to the chagrin of established political men. Crossing swords with male MP's enhanced the legend of Lady Astor. She possessed a sharp wit and was never afraid to share an opinion.

There were many memorable dialogues with the likes of the acid tongued Winston Churchill; she was once alleged to have remarked: "Oh, if you were my husband, I'd put poison in your tea" to which Winston purportedly replied without batting an eyelid: "If I were your husband, I'd drink it with pleasure". Another anecdote was when she putatively exclaimed in horror: "Winston, you're drunk!" to which he supposedly remarked: "And you are ugly. However, when I wake up tomorrow, I shall be sober, and you will still be ugly!"

Her friend and regular close correspondent George Bernard Shaw began this 1939 letter sharing this opinion: "I think it is time for you, as a sensible woman trying to keep your political household of dunderheads and lunatics out of mischief, to get up to the House and point out the cruelty of keeping up the pretence of a three years war when everyone who can see three moves in front of his or her nose knows that the war is over"

The far right politician Oswald Moseley was impressed by her prowess on the hustings: ”She was absolutely unabashed by any situation. Great effrontery but also, of course, enormous charm. People were usually overcome by it. She was much better when she was interrupted. She must have prayed for hecklers and interrupters. She certainly got a lot”

The British archaeologist Thomas Edward Lawrence wrote in an intimate but platonic 1929 letter to her: "I do not know when or with whom I have ever maintained so long so hot a correspondence. Clearly we are soul mates!"

Fellow parliamentarian, the fiery Labour MP Ellen Wilkinson wrote and was close enough to state: "You are a dear … your letters always come when I am feeling ‘down’ to cheer me up"

The author and suffragette Millicent Fawcett wrote following her successful 1923 re-election to parliament: "Heartiest congratulations to you dear Lady Astor, both on your own success and on your going back into the House of Commons with seven other women … We have a lasting gratitude to you"

The American writer Edward J. Renehan Jr. talked of her anti-Semitic rhetoric: "As fiercely anti-Communist as they were anti-Semitic, Kennedy and Astor looked upon Adolf Hitler as a welcome solution to both of these "world problems" (Nancy's phrase). ... Kennedy replied that he expected the "Jew media" in the United States to become a problem, that "Jewish pundits in New York and Los Angeles" were already making noises contrived to "set a match to the fuse of the world"

The British politician Sir Harold George Nicolson talked of a fiery exchange in the corridors of power: "In the corridor a friend of mine named Alan Graham came up to Nancy and said, 'I do not think you behaved very well' [in a meeting of the Foreign Affairs Select Committee]. She turned upon him and said, 'Only a Jew like you would dare to be rude to me.' He replied, 'I should like very much to smack you in your face.' I think she is a little mad"

Her husband, William Waldorf Astor, tried to play down her sympathetic tendencies towards appeasement: "To link our weekends with any particular clique is as absurd as is the allegation that those of us who desire to establish better relations with Germany or Italy are pro-Nazis or pro-Fascists"

On her initial arrival in parliament, Winston Churchill told her unequivocally: "We hoped to freeze you out"

Churchill went further by stating: "I find a woman’s intrusion into the House of Commons as embarrassing as if she burst into my bathroom when I had nothing to defend myself with, not even a sponge"

The historian Martin Pugh gave this assessment: “She campaigned for many women's issues including the provision of nursery schools, widows' pensions, equal employment, women police, and measures to reduce the maternal mortality rates”

The educator and writer Susannah O’Brien gave this assessment: "In the 1920s women were emerging into the public sphere with a voice and a vote for the first time. Yet despite these new freedoms, they were still imprisoned behind societal expectations. We see these contradictions in the letters both sent and received from Astor’s office"

The history professor at the University of Reading, Dr Jacqui Turner, discussed her electioneering: "Nancy ran an amazing, lively, witty American-style campaign. She didn’t have that English upper class stiffness [or] formality about her"

Dr Jacqui Turner noted with great insight: "Nancy Astor has almost become more synonymous with the prejudices of her time than the many men who held similar views but escaped similar censure. They have not been subject to the same level of scrutiny"

Dr Jacqui Turner talked of historical importance: "The election of Nancy Astor changed British democracy forever. The importance of her election is that, for the first time, a woman was able to directly influence the parliamentary debate and the writing of the laws of her own land – a responsibility she willingly and ostensibly shouldered for all women"

Glenys Williams, a member of the public in her constituency during WW2 commented: "Lady Astor continually inspired us with her optimism, courage and indomitable spirit"

The University of Exeter researcher Lisa Berry-Waite shared this observation: "Nancy Astor’s election success in the 1919 Plymouth Sutton by-election made headlines around the world and represented a new era for British politics"

The Conservative politician Rebecca Smith remembered with admiration and respect: "Although the circumstances in which she was elected are different than what a lot of us find now, ultimately she opened the door for women MPs to come through, and she held that door open"

The labour leader Jeremy Corbyn was excited at the unveiling of her statue in Plymouth: "I'm really pleased the statue is going up" 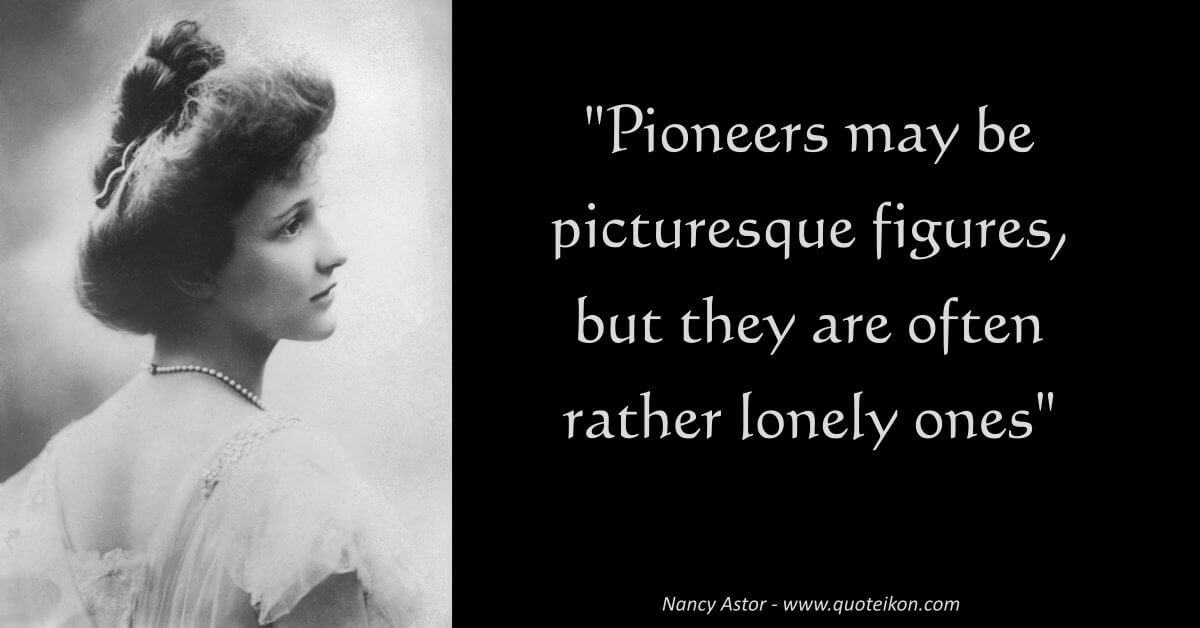