Lena Horne was born and bred in New York City and her career got off to a start as a dancer in the legendary New York Cotton Club in the neighbourhood of Harlem. It wasn't long until her singing talent was discovered and she was performing to packed audiences at the Cotton Club and other venues across New York.

In the early 1940's Horne made her way to Hollywood and sang at the Little Troc club on Sunset Strip and soon after she signed a contract with MGM studios that would see her become the biggest earning black female actress of her era. It wasn't all sweetness and light though as her movie roles saw her isolated away from the other cast members so her scenes could easily be cut out for showing in cinemas in Americas southern states where they could not accept black actresses in anything other than subservient roles.

Some of her more notable screen roles were in all black movies or musicals such as Stormy Weather in 1943 in which she sang the title song of the movie that was to become her trademark song in theatres for years to come. During WWII she made quite a stir when she refused to sing in front of segregated audiences, the army found a compromise by assembling audiences of white German POW's and black U.S. soldiers.

Hornes frustration with racism in the entertainment industry saw her become a civil rights activist where she regularly joined peaceful marches including the "March On Washington" in 1963 that concluded with the epic Martin Luther King Jr. "I have A Dream" speech, she also sang in many civil rights concerts and festivals. She was a regular visitor to the Whitehouse during the John F. Kennedy administration where she shared her views on racism and lynchings in the deep south.

During her career Lena Horne was nominated 8 times for Grammy awards of which she won 4 of them including Best Cast Show Album and Best Female Vocal Pop Performance for her 1981 Broadway Musical show; Lena Horne: "The Lady and Her Music". Her last recorded album called "Being Myself" was released in 1998 meaning her career spanned more than 70 years and her legacy as one of the finest singers of her generation was complete.

Behind her silky smooth voice was a determined woman who would not allow racism get in the way of her career and she was well known for some great quotes and comments; So here is my compilation of 15 of the best Lena Horne quotes

In 1942 Time Magazine was praiseful about her performance at the Savoy-Plaza hotel in New York: "Manhattan’s quietly swank Savoy-Plaza was last week doing the biggest business in its history. The attraction was the face and sultry singing of a milk-chocolate Brooklyn girl, Lena Horne. Unlike most Negro chanteuses, Miss Horne eschews the barrelhouse manner"

The critic Will Friedwald described her career thus: "In the early work, she's always trying to prove everything, trying to establish things, really working to gain your attention. And in the later work, she just kind of lays back and lets it happen"

Jazz critic Derek Jewell was impressed to say: "She may not belt out songs with the classic brashness of Merman, nor recreate them as magically as Ella, nor sweet-and-sour them like Peggy Lee. But no singer of popular music so dominates a song, stamps it with so distinct and vivid a character, charges the most banal phrase with such histrionic glitter. With Lena Horne you feel the authentic electricity at the nape of the neck"

Lena's daughter Gail Buckley spoke of her disappointment and the reasons for her not to be cast in "Show Boat": "I just think it was a racist situation. In 1951 MGM couldn't have sold a film with Lena in the South unless they cut her out. This couldn't be done with a film like Show Boat in which she would have played scenes with white co-stars like Kathryn Grayson and Howard Keel. But MGM was the least racist studio in Hollywood. They didn't hesitate to put her under contract"

The biographer James Gavin remarked about the short film "Boogie-Woogie Dream" in which she starred in 1941: "Unlike nearly all the black characters in white-produced films of the day, the ones in here reveal not a hint of stereotyping. Instead, the film treats jazz and the blues with reverence" 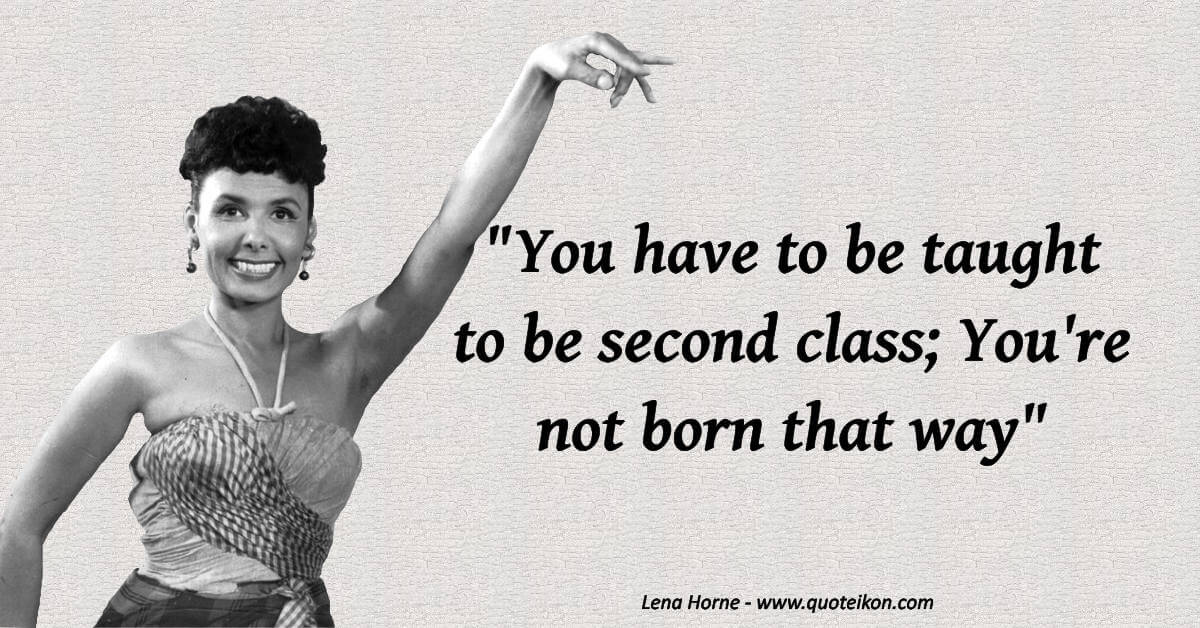