When he published 'The Open Society and Its Enemies' in 1945, his criticism of Plato, Marx and Hegel caused a storm that reverberated throughout the remaining decades of the 20th century.

The books criticism from his detractors were legion including Walter Kaufmann, Ernest Mandel, Rajeev Bhargava and Robert C. Solomon all citing the authors positivist narrowness of thought. For every critic there was a supporter with the likes of Gilbert Ryle, George Soros, Bertrand Russell and Sidney Hook all rushing to the defence of Popper.

The Legacy of Karl Popper

No one has had more influence on the course of the philosophy of science throughout the 20th century than Karl Popper. With his rejection of verificationism Popper offered an alternative by testing scientific theories using falsificationism.

His was a scientific philosophy that any hypotheses must be falsifiable before it can be considered to be scientific. Meaning that if any claim that cannot withstand the scrutiny of being proven to be false or incorrect then it cannot be a scientific claim.

Popper believed a shift in thought was required and scientists could increase knowledge by pushing the limits of testing theories. The more tests carried out on any theory will increase knowledge and lead to a greater understanding of the world and the universe.

Post WWII Popper took up a position as the only philosopher at the LSE (London School of Economics). From a bare classroom he built a philosophical empire that entwined the thoughts of social and political philosophy with his philosophy of science that captured the imagination of generations of students. He clearly illustrated that public scrutiny in a democracy should reach the same level of critical questioning that a theory does in a scientific laboratory.

Perhaps his greatest gift to the world is the legion of alumni who went from his hallowed halls of academia to pace the corridors of power in politics or grace the corporate chambers of commerce and can look back in pride and gratitude towards one of the greatest philosophical minds of the twentieth century, Karl Poppers.

Bertrand Russell described his principal political treatise (The Open Society and Its Enemies) thus: "A work of first-class importance which ought to be widely read for its masterly criticism of the enemies of democracy, ancient and modern. His (Popper's) attack on Plato, while unorthodox, is in my opinion thoroughly justified. His analysis of Hegel is deadly. Marx is dissected with equal acumen, and given his due share of responsibility for modern misfortunes. The book is a vigorous and profound defence of democracy"

The philosopher Michael Esfeld opined this opinion: "Popper’s philosophy of science teaches us that no individual or group of individuals can determine the course of society by means of a prepared plan (a “conspiracy”)"

The economist Friedrich Hayek was impressed to say: "The conception of science as a hypothetico-deductive system has been expounded by Karl Popper in a manner which brings out clearly some very important points"

An eminent professor and philosopher of science Alan Chalmers shared this observation: "One of the things that I have learnt is that on a number of major issues Popper is indeed wrong, as is argued in the latter portions of this book. However, this does not alter the fact that the Popperian approach is infinitely better than the approach adopted in most philosophy departments that I have encountered"

The financier George Soros, who was his student at LSE commented: "How could Popper take it for granted that free political discourse is aimed at understanding reality? And even more intriguingly, how could I, who gave the manipulative function pride of place in the concept of reflexivity, follow him so blindly? Let me spell out my conclusion more clearly, an open society is a desirable form of social organization, both as a means to an end, and an end in itself"

The Neurophysiologist John Eccles was inspired: "I learned from Popper what for me is the essence of scientific investigation - how to be speculative and imaginative in the creation of hypotheses, and then to challenge them with the utmost rigor, both by utilizing all existing knowledge and by mounting the most searching experimental attacks"

The author and a Senior Lecturer in Philosophy, James Ladyman, shared this evaluation: "The leading critic of the positivists in their heyday was of course Popper. There has been a tendency for philosophers of science to regard Popper as something of an embarrassment. However, naturalistic philosophers should take it as an interesting fact about science that Popper has long been the favourite philosopher of science among scientists"

The mathematician John Maynard Smith was full of indecisive admiration: "I do have a great respect for Popper. I mean, I think... he's nearer to... I mean, Popper's ambition, in relation to science, at least, was to discriminate between, sort of, science and what he called pseudo-science"

The American philosopher of science Tim Maudlin held no such misconceptions: "Popper was kind of an egocentric jerk"

The academic Nassim Nicholas Taleb was laudatory in his words: "Popper believed that any idea of Utopia is necessarily closed owing to the fact that it chokes its own refutations. The simple notion of a good society that cannot be left open for falsification is totalitarian. I learned from Popper, in addition to the difference between an open and a closed society, that between an open and a closed mind" 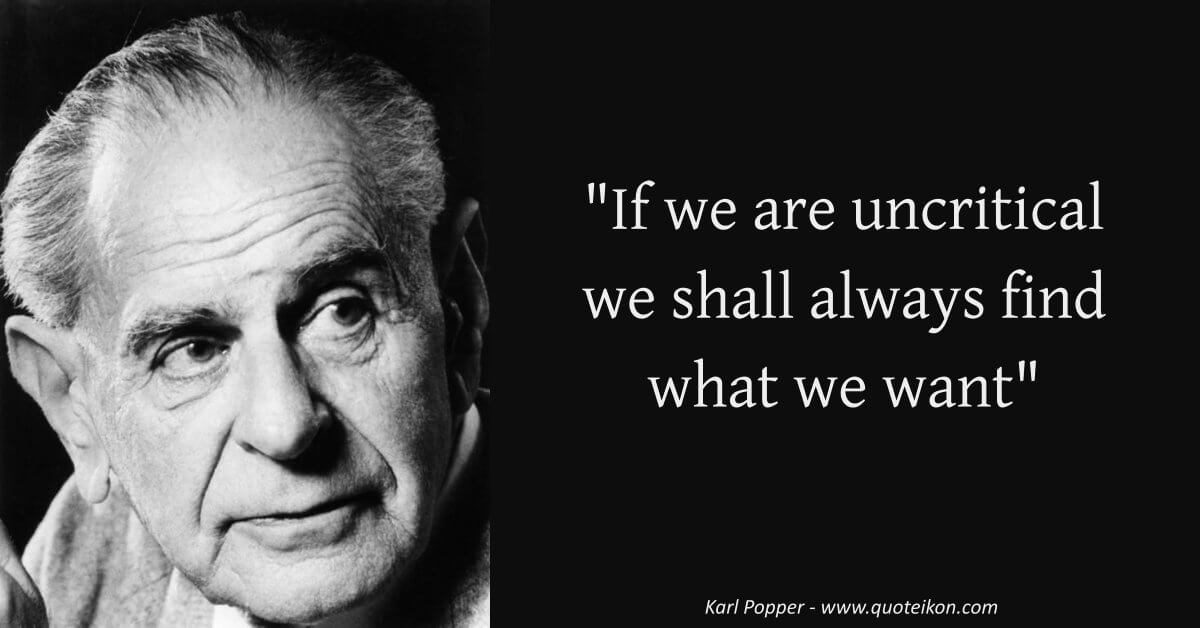