The Swedish filmmaker Ingmar Bergman who spent his 60 year career examining the human mind and soul on celluloid built up a body of work of more than 60 films for the big screen and television that saw him earn 12 Academy Award nominations for which he was rewarded with 3 Oscars in the best foreign film category.

As a filmmaker his list of accolades is enviable, Bergman was the darling of the Cannes Film Festival in the mid 1950's winning awards in 1955, 1957 and 1958 which went towards his eventual haul of seven awards from the French film festival. Bergman shining at Cannes came to be just as expected as his habit picking up Golden Globe's as he accumulated nine nominations of which he won six Golden Globe Awards starting in 1960 with the movie "Wild Strawberries" right up to his last GG award in 1984 for "Fanny And Alexander".

Ingmar Bergman built up a reputation as an existentialist director in a lifelong pursuit of the emotional truths that haunt every human being from time to time, his mission was to delve into the heart and soul and expose every aspect of the private struggle containing the unspoken fears and feelings that dwell inside us all. His visual outlook translated into a warts and all view of the world where he left no stone unturned illustrating human fragility by focussing on their facade of strength being slowly eroded by the journey of life revealing the desperate nakedness of vulnerability.

To achieve each films objective Bergman employed a host of visual techniques including a dramatic use of light and shadows, close up shots of emotional faces and ticking clocks to give a sense of urgency or suspense. He worked closely with his actors, often allowing them the creative freedom of expression as he found most actors worked better when they passionately believed in their lines so he was happy for them to alter the script if it resulted in a more dramatic scene.

Behind the lens Bergman cultivated a long lasted creative partnership with the cinematographer Sven Nykvist who shot his movies for many years. This was not the only long lasting professional relationship Ingmar nurtured as he created a virtual repertory company of Swedish actors he would regularly call upon to appear on screen including Bibi Andersson, Erland Josephson, Gunnar Björnstrand, Gunnar Björnstrand, Harriet Andersson, Ingrid Thulin and Max von Sydow.

Nykvist added to the Academy Award tally for Bergman movies when he won the Oscar for Best Cinematography for "Cries and Whispers" (1973) and "Fanny and Alexander" (1982). In the 1966 movie "Persona", Nykvist in collaboration with Bergman and the compliant stars Bibi Andersson and Liv Ullmann, developed a technique of shooting close ups that revolutionised the way cinematographers filmed facial close ups.

Bergman starting screenwriting and directing in the 1940's but his first flush of fame came with the 1955 movie "Smiles of a Summer Night" that saw the director wearing the name of this movie on his face at the Cannes Film Festival as it won the Best Poetic Humour category in the same year.

Within two years Bergman was back at Cannes winning the Jury Special prize for his 1957 film "The Seventh Seal" which reaffirmed his name as a filmmaker to watch and led to a golden period in his career as he established himself as an existentialist director of high regard. In 1963 he breached the boundaries of the moralists by including nude and scenes of a sexual nature in "The Silence" that achieved box office success more down to its notoriety for lust rather than the loneliness of the fear of death which one of the stars depicted.

Ingmar Bergman often considered his best movies to be "Persona" (1966),"Cries & Whispers" (1972) or "Autumn Sonata" (1978). "Autumn Sonata" was made in Munich after Ingmar went into a self imposed exile from Sweden because of tax evasion issues, it was also his only movie in which his namesake Ingrid Bergman starred in a coming together of [arguably] the best Swedish actress and director of the twentieth century.

After the award winning "Fanny and Alexander" in 1982 Bergman retired from making movies but continued to work directing stage plays and drama's on television. Ingmar Bergman was a master of his craft who stayed true to his artistic ideals throughout his life and left a body of work as rich in the questions asked of the viewer as it is remarkable for its groundbreaking cinematography and soul searching scripts. Both on and off set he was never short of a word or two for the cast, crew and media which provided me with a plethora of material to compile this list of 26 of the best Ingmar Bergman quotes.

The critic Mick LaSalle shared this comparison: "Like Virginia Woolf and James Joyce in literature, Ingmar Bergman strove to capture and illuminate the mystery, ecstasy and fullness of life, by concentrating on individual consciousness and essential moments. His achievement is unsurpassed. He is one of the few filmmakers who can be spoken of in the same breath with those artists and with other supreme figures of other disciplines"

Woody Allen gave this assessment: "Bergman is prolific, and the films that followed these early works were rich and varied, as his obsession moved from God's silence to the tortured relations between anguished souls trying to make sense of their feelings"

The director Bertrand Tavernier recognised his originality: "Bergman was the first to bring metaphysics - religion, death, existentialism - to the screen"

The critic Richard Corliss on Bergman's 2003 movie Saraband: "This is a testament of love and anguish from the man who used to be called the greatest living filmmaker. Well, dammit, he was. And, as proves, he still is"

The filmmaker John Boorman felt his influence: "I think he's influenced everybody. What he did more than anybody was to show how deeply you can penetrate into the human spirit on film"

The director Stanley Kubrick made this comparison: "I believe Bergman, De Sica, and Fellini are the only three filmmakers in the world who are not just artistic opportunists. By this I mean they don't just sit and wait for a good story to come along and then make it. They have a point of view which is expressed over and over and over again in their films, and they themselves write or have original material written for them"

The filmmaker Ang Lee gave this observation: "For me the filmmaker Bergman is the greatest actor of all. His vision and his filmic force, the thing that the Frenchmen call auteur. What Kurosawa and Fellini also have — but to me Bergman is number one"

The director Steven Spielberg was impressed to say: "I have always admired him, and I wish I could be a equally good filmaker as he is, but it will never happen. His love for the cinema almost gives me a guilty conscience" 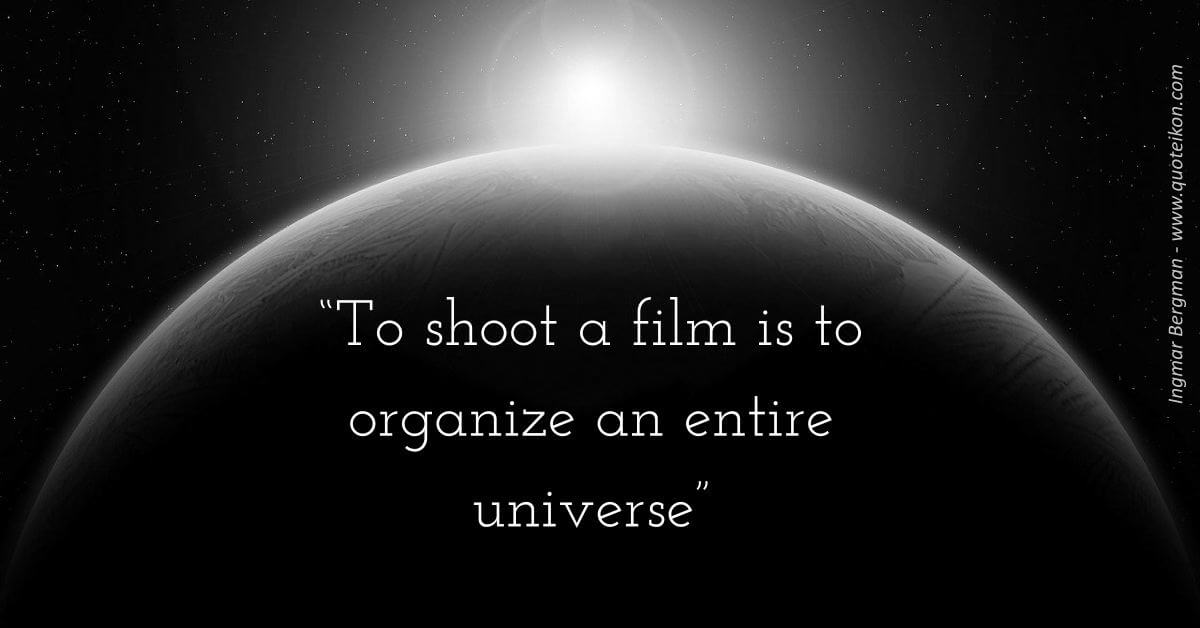