Ian Smith was the last of a dying breed of white Rhodesian colonialists who tried to stop the tide of majority rule in favour of his paternalistic version of one party white government.

At heart Ian Smith was a good and well intentioned man, he foresaw what would happen under majority rule and tried to use the list of failed African states as his sole rationale for keeping white minority rule. He was not racist, indeed the black Rhodesian's under his watch had never had it so good. What Smith failed to grasp was the will of the people and the right to choose their own destiny, regardless of whether they will benefit from it or not.

Smith was the son of British settlers and went on to become first Prime Minister of Rhodesia who was not born abroad, yet he kept his loyalties to Britain and in 1941 he enlisted to fight in WW2. Ian Smith was later quoted as saying "I was stimulated by what lay before me. I was going to fight for Britain and all that it represented. This was uppermost in my mind, and everything else faded into the background". He served with distinction as a fighter pilot and in later years he always wore with pride his old Spitfire pilot’s tie in a reminder to various UK government ministers that his loyalty lay with the British empire he fought to defend.

Post WW2 there was immense financial and political pressure on Britain to relinquish control of their colonies and slowly one by one their empire began to diminish as more and more liberation groups pressed for the freedom of self determination. It was only a matter of time until this gathered the momentum required for change in Rhodesia.

In 1960 the UK Prime Minister Harold MacMillan gave his historic "wind of change" speech to the parliament of South Africa where he said: "The wind of change is blowing through this continent. Whether we like it or not, this growth of national consciousness is a political fact". This set off alarm bells in Salisbury which led to a series of events culminating with Smith becoming Rhodesia's 8th Prime Minister in 1964 and after failed negotiations with Britain, declaring unilateral declaration of independence (UDI) in 1965. Britain responded with sanctions but with South African support the sanctions proved ineffective and a series of British diplomatic missions followed that all ended in failure because the Smith government would not give in to majority rule.

As the 1970's progressed the guerrilla armies of Robert Mugabe and Joshua Nkomo were growing stronger as the clamour for independence grew louder and louder. By the end of the decade the Smith government were running short on the resources to effectively put down the insurgents and it became obvious to even the most ardent white supremacist that they would have to concede to majority rule. With few options available for Smith he attended the London constitutional talks in 1979 which resulted in an open election which swept Robert Mugabe to power in 1980.

Smith then led the opposition for several years where he was highly critical of the Mugabe regime. In later years the black opposition to Mugabe came to appreciate Smith's bravery in condemning the Zimbabwean leader, he called the government corrupt gangsters and at one speech at the University of Zimbabwe the mainly black students stood to give him a standing ovation.

Smith appeared to become bitter as he oft trotted out the "I told you so" idiom when referring to the economic chaos caused by Mugabe and that although he was factually correct he lacked the vision to recognise that the Zimbabwean people had collectively fought for and won the right to self determination and they would rather live in their own failure than sit bowed under the yoke of white minority rule. As a leader he was more pragmatic than charismatic and however well intentioned he was towards Rhodesia he failed to see the bigger picture and inevitability of majority rule. He showed a dogged determination in his beliefs until the end and was always forthright with his words that I have used to compile this list of 16 of the best Ian Smith quotes.

Joshua Nkomo who was vice President to Robert Mugabe shared this observation: "Life's greatest lessons have come to me so late … that a country can have political independence while its people are not free"

Ernest Mtunzi who worked as a political aide to vice president Joshua Nkomo gave this assessment: "Smith was being realistic - if you give people something before they are ready, they are going to mess it up. And that has happened. If he had had the opportunity to work with the people and help bring them up, Zimbabwe would be a better place now. Smith did make it better during his government. There is no reason why he could not do that if he had been allowed to go on"

Former Zimbabwean Prime Minister Morgan Tsvangirai recognised what was missed: "If Smith was a black man, I would say that he was the best Prime Minister that Zimbabwe ever had"

The politician Patrick Kombayi was appreciative to the Smith years: "The roads that we are using today were all built by Smith. All the infrastructure is Smith’s. We never suffered the way we are suffering now because Smith took care of the economy that supported all people and they had enough to eat. When he left power the [British] pound was on a par with the Zimbabwean dollar, but President Mugabe has killed all that"

The Rhodesian politician Roy Welensky was not so impressed: "Dealing with Smith is like trying to nail jelly to a wall. Make no mistake: Smith is a ruddy ruthless man"

British Prime Minister Harold Wilson summed him up thus: "Ian Smith was a formidable opponent, but he lacked any vision. We offered him much better terms at the Fearless and Tiger talks than anything he is going to get now. He held out too long, for too much, and is going to end up with nothing" 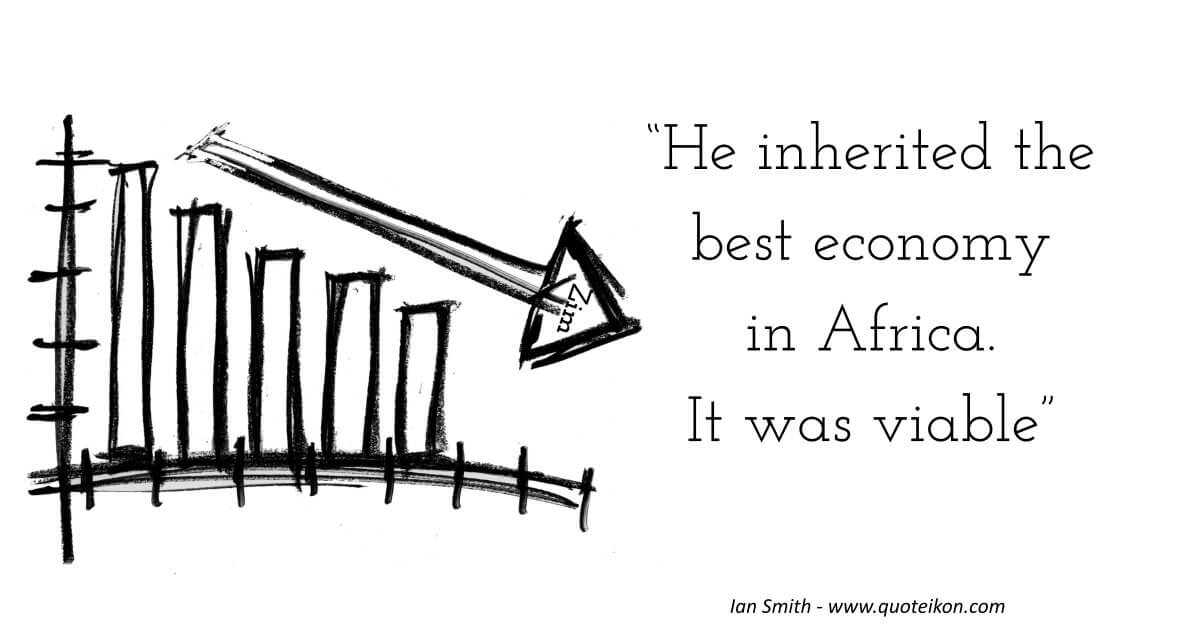