Since time immemorial the art of warfare has been constant in not just creating warriors, legends and graveyards, but with furnishing them with tales of brave deeds and tactical brilliance that live on for millennia such is the enormity of their battlefield accomplishments. Naval history has captured some memorable moments of high stakes technical battles played out on the seven seas but none compare to the stand out tactical genius and bravery of Horatio Nelson who always stood in the line of fire with his crew as his ship led the fleet into battle.

From a young age Nelson was destined for a naval career, he first went to sea aged 12 as a midshipman aboard the HMS Raisonnable under the command of his maternal uncle Captain Maurice Suckling. He learnt the basics of seamanship for the next 6 years until he sat his lieutenant's examination on 9th April 1777, he passed and received his commission and an officers position on HMS Lowestoffe.

During the American Revolutionary War, the Lowestoffe captured some enemy ships in 1779 including a tender called Little Lucy and Nelson was given his first taste of command of this vessel at the age of 20. His wartime captaincy, however, was short lived. After the British defeat in the land war his American adventure was over and he found himself in a navy without a war which despaired him as the need for glory was burning in his heart.

In 1793 the French granted him his wish and declared war on England and Nelson was given command of the 64-gun HMS Agamemnon and sent to join the Mediterranean fleet under the command of Admiral Sir John Jervis. He served with distinction and bravery deservedly being mentioned in positive dispatches back to the office of the admiralty in London.

In 1797 Horatio followed the fleet led by Sir John Jervis into the battle of Cape St Vincent just off the Portuguese coast and when Nelson saw that the battle plan could not meet its victory objectives he took action and broke away from the formation to attack the Spanish fleet head on assisted by HMS Culloden which followed his lead. A momentous battle ensued and after the smoke of cannon finally faded Nelson had captured 2 Spanish ships and their fleet had fled in disarray.

His next big engagement at the Battle of Santa Cruz de Tenerife was not so successful as he led an amphibious landing party he was shot on the beach breaking his upper arm in numerous places. Back at the ship his arm was amputated and he received worse news that the mission was a failure.

1798 proved to be a better year for Nelson as he hunted the French fleet in the Mediterranean and finally found them anchored down at Aboukir Bay at the mouth of Nile in Egypt. Although outnumbered he engaged the enemy in a manoeuvre never before written in any Naval combat handbook. The French believed they could not be out flanked because of their close proximity to the shore and shallow waters but Nelson launched a double pronged attack down this channel and head on. The French were unprepared for such an attack and in the confusion they fell 1 by 1 until 11 French vessels were sunk or captured and only 2 managed to escape the British. The decimation of the French fleet in the battle of the Nile was Horatio Nelson's most decisive moment to date, however he lost the sight in his right eye after being hit by shrapnel during the battle, but he was happy at the overall outcome as it virtually gave control of the Mediterranean to Britain and he became a hero back in Blighty.

There were many more battles to come, and, although his reputation was at an all time high in England, it was on the decks of the fleet that Nelson now commanded where he was given the utmost respect. His tactic was to position his ship side by side with the enemy while each ship blasted hell out of each other, however he never hid away during these skirmishes and stood with his crew on deck coordinating the attack.

When boarding an enemy ship Horatio joined his crew sword in hand and fought toe to toe despite his rank as admiral. This was to become part of the legend known as "The Nelson Touch" and every man, boy and dog in the British Navy were inspired through respect and admiration for his lead by example qualities. The best and the worst were yet to come, the Battle of Copenhagen was considered a success but his defining moment was to be the Battle Of Trafalgar.

On the 21st October 1805 Admiral Nelson engaged the combined forces of the French and Spanish who under the Emperor Napoleon Bonaparte planned an invasion of England. The stakes were high and Nelson again employed unconventional maritime warfare as he split his fleet into 2 divisions to smash headlong into the enemy. The bloody battle endured for hours and Nelson's strategy of side to side full on broadsides was proving more effective, but during one close encounter a French sniper took aim and shot him with a musket ball inflicting what would prove to be a fatal wound. Lord Nelson survived for long enough to realise victory was assured and died with the quote: "Thank God, I have done my duty".

In order to preserve Nelson's body it was placed in a cask filled with French brandy and HMS Victory set sail for Gibraltar. In Gibraltar the brandy was replaced with a cocktail of wine and spirits for the journey back to England, his body arrived at Greenwich, London on 4th December where an autopsy was performed by the surgeon William Beatty. From 4th January 1806 he lay in state at Greenwich Hospital’s Painted Hall until his burial on 9th January 1806 in St Paul’s Cathedral’s crypt.

In battle he had an uncanny knack of seeing an opportunity, having the swift thinking to seize it and the temerity to control it, Horatio Nelson was the masterful tactician of maritime warfare whose methods have been studied by every generation of military scholars up to the present date. An inspiration to all in actions and in words, his name is celebrated every year on Trafalgar Day that involves the ritual of giving a toast to honour the ‘Immortal Memory’ of Nelson. His on deck rousing speeches gave his men the spirit to enter battle and inspired me to compile this list of 20 of the best Horatio Nelson quotes.

Lord Byron recognised the enormity of his actions: "Nelson was Britannia's god of war"

Alexander Scott, the chaplain who attended him in his dying moments at Trafalgar spoke eloquently of his friend: "Let the country mourn their hero; I grieve for the loss of the most fascinating companion I ever conversed with - the greatest and most simple of men - one of the nicest and most innocent - interesting beyond all"

King George III spoke mournfully of England's bitter sweet Trafalgar: "We have lost more than we have gained"

Queen Elizabeth II on the 200th anniversary of Trafalgar looked back with this toast: "The Immortal Memory of Lord Nelson and those who fell with him"

The Times solemnly reported his death thus: "We do not know whether we should mourn or rejoice. The country has gained the most splendid and decisive Victory that has ever graced the naval annals of England; but it has been dearly purchased. The great and gallant Nelson is no more"

The author Stanley A. McChrystal took great inspiration from him: "Leaders can call to the best in us. I thought often of the inspiring flag signal Horatio Nelson sent on the eve of Trafalgar. "England expects every man will do his duty." The flags above the Victory didn't ask or demand obedience in the upcoming fight; they expressed Nelson's unshakable admiration for and faith in the sailors and patriots he knew them to be"

Vice Admiral Jonathan Woodcock summed up his naval legacy: "All those who worn a naval uniform since 1805, they are doing their best to live up to Nelson’s example of courage, duty and sacrifice"

His lover Lady Hamilton knew him well: "He considered his own honour too much" 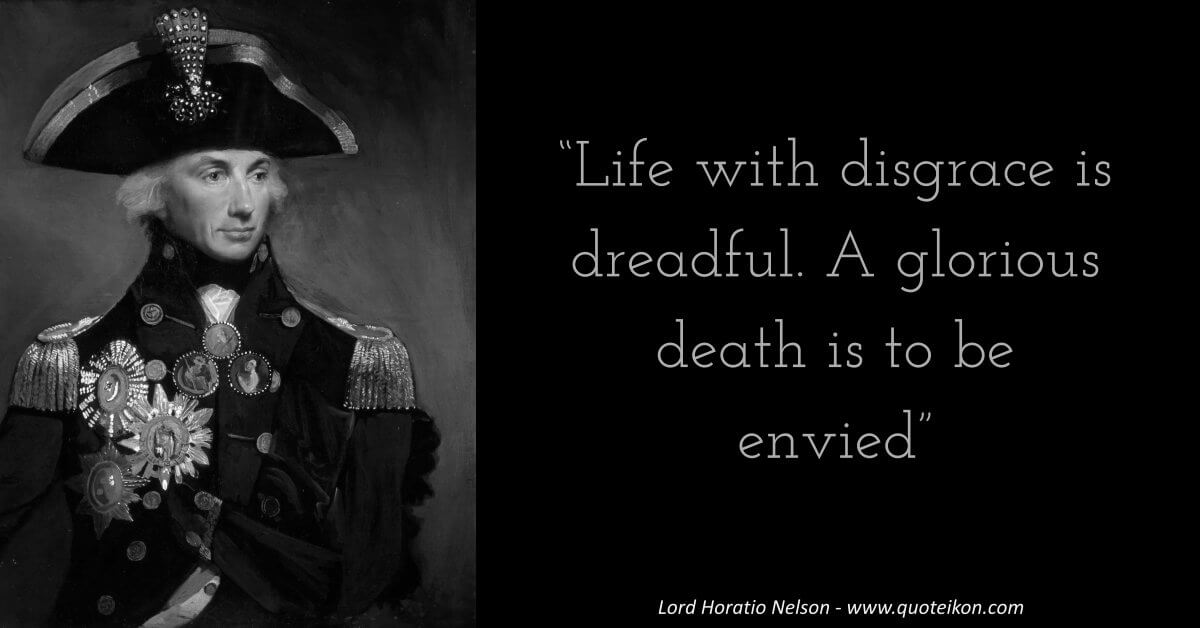