Born George William Frederick in 1738 he was to become George III by the age of 22 and he sat on the throne of Great Britain for 59 years in total making him up to that time the longest reigning monarch in Britains history.

George reigned through turbulent times having to deal with the American Revolutionary War on one side of the Atlantic with the persistently troublesome French causing problems through the seven years war right up to the Napoleonic wars on the European side of the pond.

His loyalty to the crown was never in question and even though he was also prince-elector of Hanover and eventually became the King of Hanover he always swore his allegiance to Britain above everything.

Losing the Americas troubled him for many years although diplomacy saw that he accordantly accepted that fate, however his victories in the European theatres of war made it all the more bearable.

His later years were marred with bouts of insanity interspersed with fleeting moments of clarity of thought, he died in Windsor castle in 1820 and his tumultuous reign had finally come to an end.

His reign of 59 years and 96 days was longer than any of his predecessors, however both Victoria and Elizabeth II have since reigned for longer making him the third longest reigning monarch in Great Britains history

In his insistence to be involved in the politics of the day he came out with some majestic speeches and great one liners, so here is my compilation of 11 of the best George III quotes.

Winston Churchill cut to the chase wth his appraisal: "The personality of George III was now exercising a preponderant influence upon events. He was one of the most conscientious sovereigns who ever sat upon the English throne. Simple in his tastes and unpretentious in manner, he had the superficial appearance of a typical yeoman. But his mind was Hanoverian, with an infinite capacity for mastering main principles. He possessed great moral courage and an inveterate obstinacy, and his stubbornness lent weight to the stiffening attitude of his Government. His responsibility for the final breach is a high one"

Churchill went on to say: "Not all the Opposition Members were so foolish or extreme, but in the King's mind all were traitors. George III grew stubborn and even more intent. He closed his ears to moderate counsel and refused to admit into his Government those men of both parties who, like many American Loyalists, foresaw and condemned the disasters into which his policy was tottering and were horrified at the civil war between the Mother Country and her colonies"

Professor Peter Thomas was more sympathetic and insinuated he was not pivotal in the war of independence: "George's hopes were centred on a political solution, and he always bowed to his cabinet's opinions even when sceptical of their success. The detailed evidence of the years from 1763 to 1775 tends to exonerate George III from any real responsibility for the American Revolution"

The colonies declaration of independence in July 1776 was not so kind towards his rule: "He has abdicated Government here ... He has plundered our seas, ravaged our Coasts, burnt our towns, and destroyed the lives of our people" 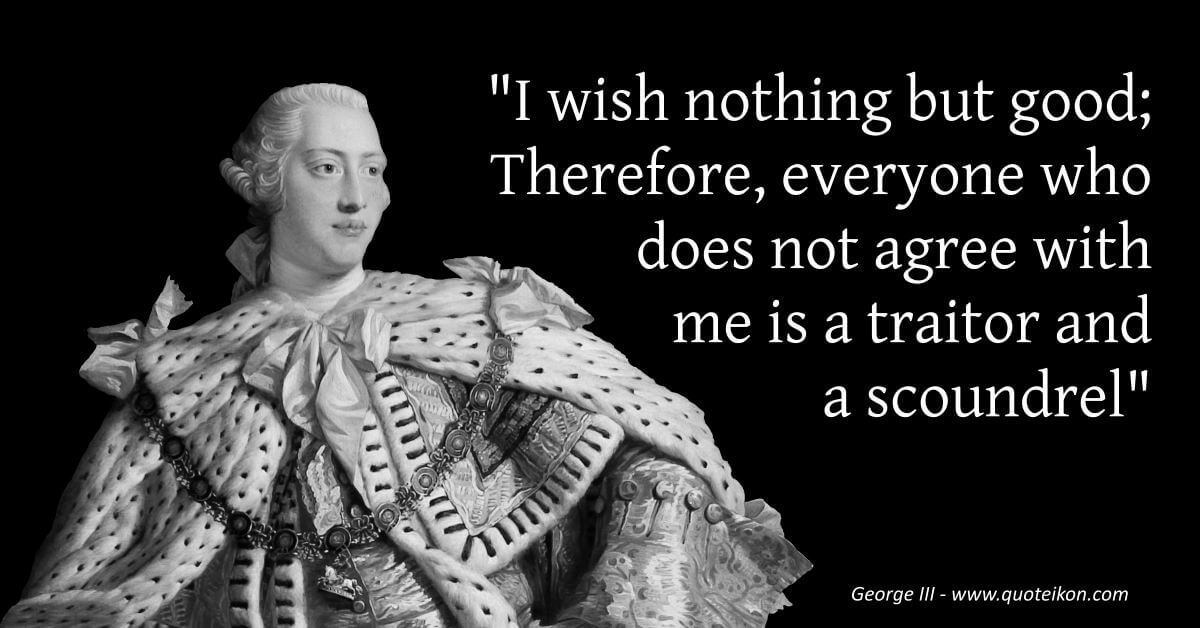