She is arguably the most authoritative political thinker of the twentieth century. Her perceptive grasp of the human need for a public and political life is the pinnacle of persuasive eloquence. Her name is Hannah Arendt, the political theorist who philosophised the present by looking to the past.

Arendt's journey to the pantheon of great thinkers flourished under the tutelage of two great philosophers; Karl Jaspers and Martin Heidegger. She was destined to be a career academic when fate and the rise of Adolf Hitler's inspired Nazism put paid to that calling.

She became a Zionist activist until the Gestapo arrested her in 1933. After eight days in lock-up she made bail pending trial. Hannah knew she had to flee Germany, her life depended on it. Arendt slipped away during the night and crossed the Ore Mountains separating Saxony in Germany and Bohemia in Czechoslovakia. She arrived safely in Prague and took the train to Geneva.

After a short stay, Arendt left Switzerland for Paris but she was now stateless and without papers. She found clerical work through a Zionist-funded outreach program. As the spectre of Nazism spread its shadow of evil beyond German borders so the influx of refugees to Paris increased. France was next in the cross-hairs of the German war machine.

The French authorities created internment camps for what they described as "enemy aliens" from Germany. Hannah was interned in a camp at Gurs in south-western France. She managed to escape and made her way to Marseille where she obtained exit papers and a visa organised by two Americans; Varian Fry and Hiram Bingham, who had the wherewithal to smoothen the passage for illegals to exit France for the U.S.

The whole experience left a deep seated scar in the mind of Hannah. She consciously devoted her time to write about observational politics for the rest of her life. Her poignant interpretation of 20th century political events set her apart as an insightful percipient who dissected the rise of totalitarianism with penetrative perception.

In 1951 she published her first major work, The Origins of Totalitarianism, illustrating her profound understanding of the rise of both Nazism and Stalinism. By the end of the decade Hannah published another carefully considered book called The Human Condition (1958) that sought understanding of human activities coursing through western history.

The sixties saw Arendt publish two equally compelling books; Between Past and Future (1961) which is a collection of essays on political thinking and On Revolution (1963) that takes a critical look and comparison of the French and American revolutions. There was also Hannah's extraordinary analysis of the Adolf Eichmann trial in Jerusalem.

The inkwell of Hannah Arendt's literary mind had morphed into a thought provoking writer of critical acclaim.

On a human level, she essayed the equality of man. On a personal level she recognised the unique human distinction that renders us all individuals. Arendt identified the challenge of homogenising the traits of individual perspective into the fabric of politically charged discourse. Political history is replete with prejudicious leaders finding scapegoats to gratify manipulated masses at the expense of humane diversity.

Arendt argued that the need for public discourse encompassing all differing human perspectives is the essence of democratic politics. Everyone, she opined, must have a voice of representation. When this essential aspect of political society is missing, then the road to totalitarianism is open.

Yet, individual thought is attracted to group consensus. Arendt was acutely aware that the need for distinctive individuals to belong is also inherent to the human condition. Being tribal is instinctive. That feeling of belonging is strong in humanity. Hannah saw all too clearly, it is a small step from group think to group hate. Alas, the hands of history are steeped in the blood of unbalanced destiny.

Hannah Arendt had witnessed this. She lived through the horrors of political fanaticism caused by totalitarianism. The inkwell of her mind was stained by the subjugation of a state styled sub-class of synthetic inhumanity. Yet, she had a curious desire for understanding, to make sense of the senseless. This was the perspective of the pen of Hannah Arendt.

In 1963 she caused a storm of outrage with the publication of "Eichmann in Jerusalem: A Report on the Banality of Evil". The man on trial for his life was Adolf Eichmann, the Nazi responsible for the transportation of millions of Jews and those deemed undesirable by the Aryan myth, to the concentration camps of death.

It was a fascinating read. Here was a man accused of the most diabolical of crimes, yet Hannah was stunned by the mundanity of the man. In reality, Eichmann was a weak individual looking for guidance, desperately searching for acceptance so he could lead a meaningful life. He found belonging in Nazism. It gave him a sense of importance. Positioned behind a curtain of bureaucratic role morality he felt detached from the actuality of genocide.

Hannah Arendt expected to see a monster in the dock. Eichmann was neither evil personified nor heinously terrifying. What Arendt witnessed was, she sensed, far worse. She described him as "terribly and terrifyingly normal". The implication being that blind obedience to an ideology instigated a lack of reflective rationality despite the end result of industrial scale human slaughter. Eichmann was unable to think critically about the effects of his actions.

Meaning the world is full of normal people like Eichmann who are prepared to be involved in government sponsored atrocities. Hence her depiction of "banality of evil".

Arendt also coined the term "Nobody has the right to obey" that reminds us a person always has control over their choice of actions that are taken through their own judgement.

The Legacy Of Hannah Arendt

She was more a political theorist than philosopher. Yet she never wrote a consistent political manifesto, her contribution was more descriptive of the political world as it is. Hannah identified that structures of power fears the dynamic of democratic freedom and always push for more administrative bureaucracy. She believed in actionable defiance towards all political attempts to decrease the balance of freedom.

When her theories are cobbled together, the legacy of Hannah Arendt points to a form of deliberative democracy where all issues must be permitted for discussion for it to be a viable and open democracy.

An eminent historian, Tony Judt, pondered this thought: "I wonder whether Habermasian constitutionalism, with its emphasis upon the burden of history, is exactly comparable to the ethics of republicanism as articulated by Arendt"

Judt went on to conclude: "Arendt’s is, to coin a phrase, the republicanism of fear. In this way of thinking, the foundation for a modern, democratic politics must be our historical awareness of the consequences of not forging and preserving a modern, democratic polity. What matters, to put it bluntly, is that we understand as well as possible the risks of getting it wrong, rather than devoting ourselves over-enthusiastically to the business of getting it right"

The philosopher and mentor to Arendt, Karl Jaspers, warned her off applying critical thinking that veered from the establishment view: "The Eichmann trial will be no pleasure for you. I'm afraid it cannot go well"

The philosopher Judith Butler shared this observation: "By writing about Eichmann, Arendt was trying to understand what was unprecedented in the Nazi genocide – not in order to establish the exceptional case for Israel, but in order to understand a crime against humanity"

The author Zoe Williams spoke of Hannah's legacy: "Perhaps Arendt’s most profound legacy is in establishing that one has to consider oneself political as part of the human condition. What are your political acts, and what politics do they serve?"

The academic Griselda Pollock shared this description: "She talks of the creation of pan movements, these widespread ideas that overarch national, political and ethnic elements – the two big pan movements she talks about are bolshevism and nazism. There is a single explanation for everything, and before the single explanation, everything else falls away. She gives a portrait of how you produce these isolated people, who then become susceptible to pan ideologies, which give them a place in something"

The poet Adrienne Rich was not impressed by Arendt's book "The Human Condition" as she described it as a: "condescending and lame book [which] embodies the tragedy of a woman’s spirit steeped in masculine ideology"

The writer Kate Bracht opined this view: "For Arendt, solitude is possible under tyranny, but not under totalitarian domination. Tyranny controls the public space, but leaves the private space alone, preserving the capacities of thought, conscience and creativity"

The author Samantha Rose Hill shared this startling truth: "As Arendt herself realized, telling the truth in the public sphere is very dangerous. She thought she was offering a record of her experience, and sharing her judgment in writing Eichmann. But what she received in return was an indictment against her personhood, and a litany of lies that responded to a book she’d never written"

Rose Hill went on to say: "Part of Arendt’s point in writing her essays on “Lying in Politics” and “Truth and Politics” which are cited so widely today was that we’ve never really been able to expect truth from politicians. Truth-tellers exist outside the realm of politics" 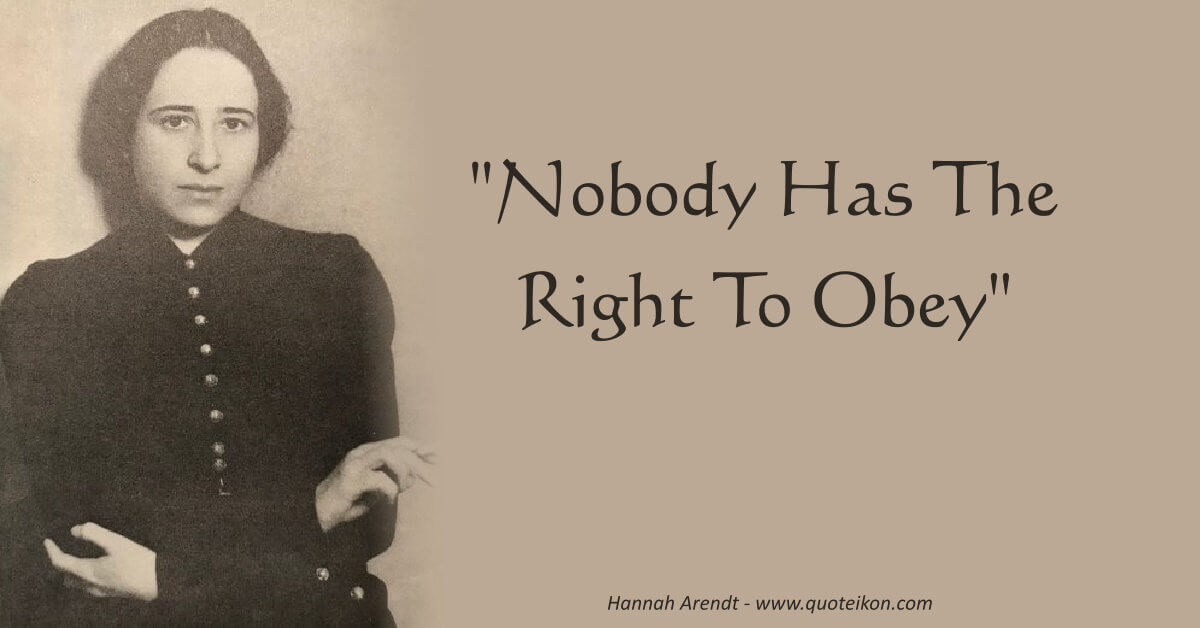