Whether he was challenging artistic convention or upsetting emperor Napoleon III, Gustave Courbet lived a life as colourful as his paintings and as unflinching as his realism would allow. Although self educated, he studied the masters in the Louvre and repeatedly replicated them as his technique training.

Courbet then developed a "what you see is what you get" approach to art that dared to traverse across the boundaries of artistic tradition as he defied convention to paint commoners on large canvas in contradiction of the established conformity that dictated it should be reserved for the vanity of nobility.

He challenged the status quo at all levels of society which left him constantly at odds with the establishment and Gustave Courbet summed up his stance with this famous quote: "I belong to no school, to no church, to no institution, to no academy, least of all to any régime except the régime of liberty".

Courbet was anti war which brought him into the unwelcome focus of a regime who admired his talent but despised his apolitical views so when he refused an olive branch offered by Napoleon III in the form of a nomination to The Legion Of Honour in 1870 his popularity in the corridors of power reduced although he gained unwanted political praise from those against the regime.

At this time Courbet wrote a letter, that would not be forgotten, to the defence ministry suggesting that the Vendôme Column which was a war monument to Napoleon I be taken down and relocated. It was not acted on but after the French defeat in the Franco-Prussian War a revolutionary government called the Paris Commune took over and carried out his suggestion, it was a disaster as the monument fell down during the dismantling process and was smashed beyond repair.

The reign of the Paris Commune was short lived and upon its removal from power Courbet was arrested and sentenced to 6 months in prison for his participation. Upon his release his woes were not over as he was ordered to pay 323,000 francs for the monument to be rebuilt and fearing bankruptcy and ruin he fled to Switzerland where he lived out the remainder of his life. Courbet's artistic style was based on reality, he famously said he could only paint what he can see and he was true to this belief with his subjects often being prostitutes or the impoverished in ragged clothes or tired labourers wearing the dirt, grind and sweat of their daily tasks.

This was a stark contrast to the what the 'in crowd' liked to see in fashionable scenes from high society. His art was gritty but such was his artistic talent that it drew praise from a younger generation of artists looking for new inspiration and scorn from the establishment and art lovers of Paris trained to expect a more aristocratic blinkered view of what art should be.

Courbet always courted controversy, none more so than with his 1866 nude painting "L’Origine du monde" which was banned from public viewing after it scandalised the Paris art world. Its English translation is "The Origin of the World" and with the painting focusing on female genitalia it was not until 1988 that it was finally allowed to be viewed publically and put on display in the Musée d'Orsay in Paris.

The model that posed for what was described as the most scandalous painting of the 19th century has always been a subject of interest until in 2018 when the French historian Claude Schopp laid to rest the mystery of her identity when he revealed conclusive proof that it was the Parisian ballet dancer Constance Queniaux, who was the mistress of an Ottoman diplomat called Halil Şerif Pasha, who posed for the most provocative painting in French history.

As an artistic provocateur Courbet was the scourge of traditional convention and he lay the foundation for the progression through realism to the impressionists and cubists and so he secured his place in the annals of artistic history. Without fear or favour he always spoke his mind so he was great for a quick quip or two, so here is my compilation of 22 of the best quotes from Gustave Courbet

The poet Guillaume Apollinaire sensed the greatness in his art: "Courbet is the father of the new painters"

The poet Charles Baudelaire saw the spirit in the artist: "Monsieur Courbet, too, is a powerful worker, he has a wild and patient will; and the results he produces, results which for some have more charm than those of the great master of Raphaelesque tradition"

The artist Eugène Delacroix recoginised the talent: "I went to see the paintings by Courbet. I was astonished by the vigour and the relief of his vast picture; but what a painting! What a subject ... Oh Rossini! Oh Mozart! Oh geniuses inspired by all the arts, who draw from things only the elements that are shown to the mind! What would you say before these pictures?"

The Barbizon painter Charles-François Daubigny spoke highly of him: "Speak to me no more of the old masters. Not one of them can stand up to this sturdy fellow Courbet"

Paul Cézanne appreciated the intricate detail of his art: "His great contribution is the poetic introduction of nature - the smell of damp leaves, mossy forest cuttings - into nineteenth century painting; the murmur of rain, woodlands shadows, sunlight moving under trees. The sea. And snow, he painted snow like no one else"

The critic John Berger understood his contribution to art history: "No painter before Courbet was ever able to emphasize so uncompromisingly the density and weight of what he was painting" 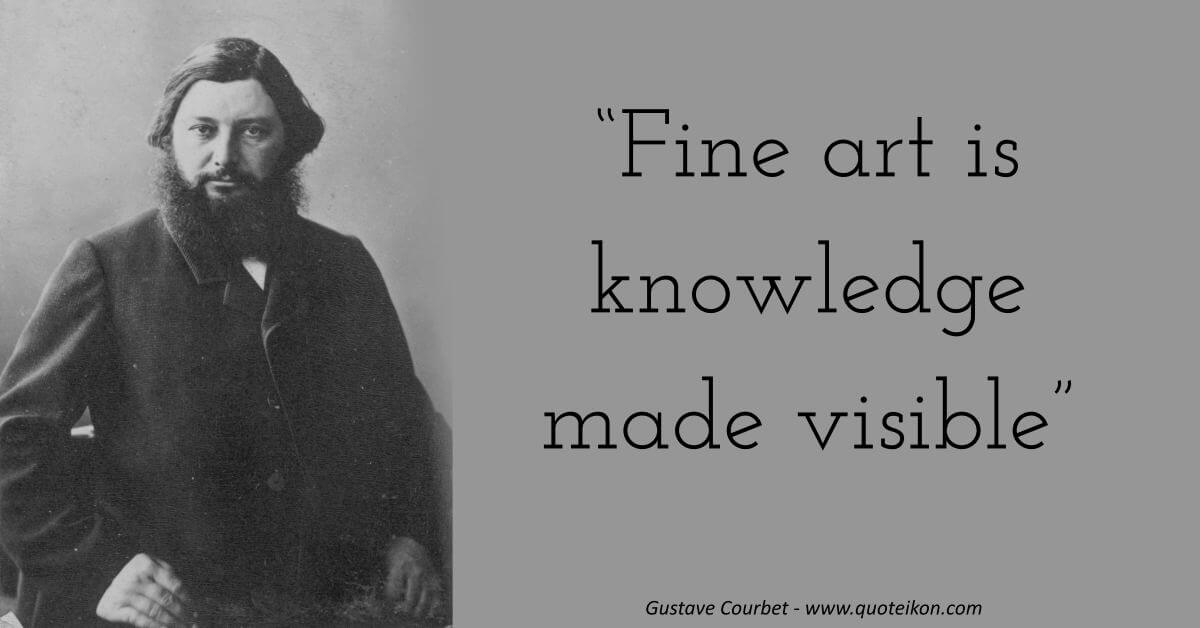