The Edith Piaf story is one that captivated post WWII France as the diminutive singer with the silken voice of a songbird and the lifestyle that the catholic church demonised as "a categorical sinner" enjoyed audience adulation right up until her untimely demise in 1963.

Edith's start in life was hardly ideal as her street performer parents abandoned her and she was brought up by her grandmother who was a madam at a Normandy brothel. After a few years her father returned and brought her to Paris to join his street performing troupe where her beautiful voice was exploited and honed into the wonderful singer she was to become in adulthood.

At 17 she fell pregnant and gave birth to a daughter called Marcelle who sadly died from meningitis aged 2. It was the Parisian night club owner Louis Leplée who discovered her singing on the streets and gave her the opportunity to perform on stage, he gave her the stage name of Piaf (meaning sparrow) because of her diminutive frame. So at 19 she started singing in nightclubs and theatres and soon her talent got noticed and she began recording her songs. As the second world war approached she was making a real name for herself but the occupation of France changed the dynamic and she was reduced to singing for the Nazis of Adolf Hitler.

She also toured POW camps singing for the French prisoners who were allowed to be photographed with her, little did the Nazis know that these photographs were used to create ID cards and Piaf smuggled these back during subsequent visits whereby she gave them to the prisoners to give them a new ID in the event of an escape.

After the war her popularity soared as she made movies and toured Europe and the America's where she was dubbed the French Billie Holiday. Her love life was tumultuous as she had many lovers and two husbands but her affair with the French public never diminished, even after her death she was as popular as ever and still sold many records. Her lack of education never affected her ability for a one liner though so here is my compilation of 15 of the best Edith Piaf quotes

The poet and film maker Jean Cocteau who knew a thing or two about talent said of her: "Edith Piaf has genius. She is inimitable. There has never been an Edith Piaf, there will never be any again"

French cycling champion Louis Gérardin passionately spoke of his mistress by saying: "Forty eight hours with Piaf are more tiring than a lap in the Tour de France"

The singer Charles Aznavour shared this observation: "I brought her my youth, my madness; she loved my whole jazzy side" 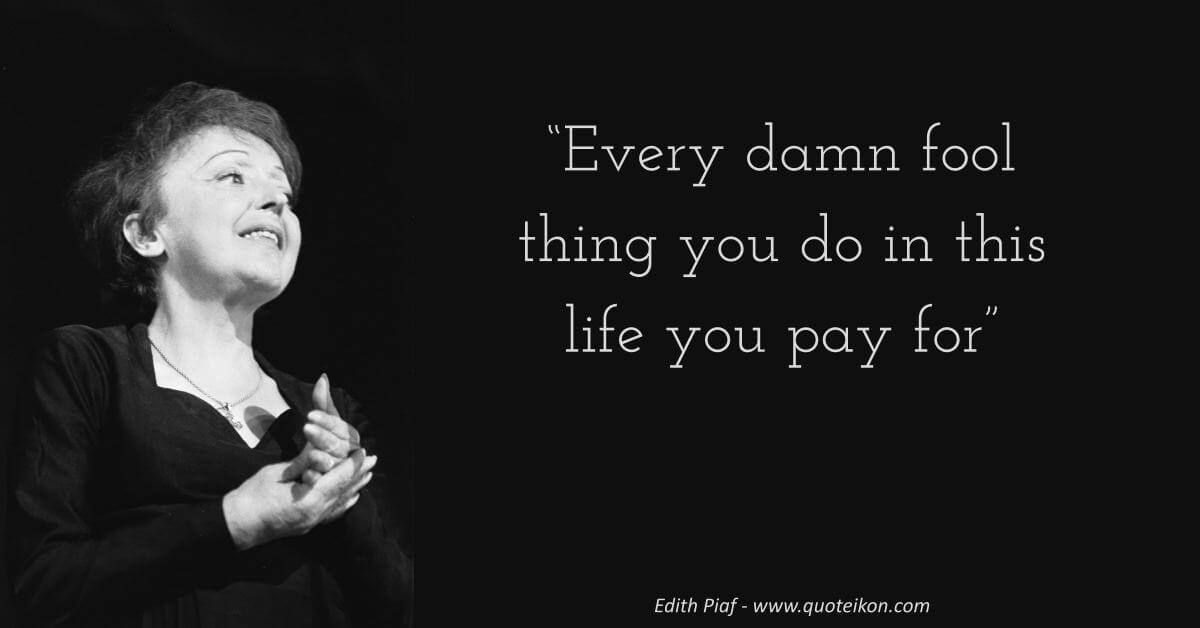