Charles Babbage was the British polymath who was inspired to design a mechanical computing device that was the fore runner for all modern day computers. His time at Cambridge university was somewhat controversial as his thesis was considered blasphemous and after being the top mathematician at Peterhouse College (Cambridge) he received his degree without examination.

Post Cambridge Babbage applied for many notable positions but he kept being turned down as the shadow of his university days seemed to cast aspersions onto his suitability for an academic role. He had the good fortune of hailing from a wealthy family as his father assisted him financially through what was a challenging time. Undaunted by the lack of career in academia he became interested in solving errors that arose from calculating mathematical data and he was involved in setting up the Astronomical Society in 1820 that was a serious rival to the authority of the establishments Royal Society.

In order to help calculate astronomical tables he designed his Difference Engine and a small prototype was constructed for demonstrations which led to him improving the design for the Difference Engine No 2. During his life neither of the difference engines were completely built due to a lack of funding but still Babbage continued his research which led him to designing a more complex machine called the Analytical Engine that used techniques such as sequential control, condition transfer, branching and looping that are the basic features in modern computing.

The Analytical Engine was to use punch cards to input data and he also designed a printer to output the calculated results. In 1991 the London Science Museum used his plans and drawings to build a Difference Engine and by the year 2000 they had also built the Babbage Printer with plans to build his Analytical Engine in the coming years. Babbage was instrumental in the development of technology and is one of the most influential scientists in computing history.

In the midst of his 1820's successes even Cambridge University forgave his earlier indiscretions and offered him the role of Professor which he failed to achieve with previous applications in 1820, 1823 and 1826. When he wasn't inventing state of the art mechanical calculators he was good for a one liner also, so the list above is my compilation of 15 of the best Charles Babbage quotes

The scientist Anthony Hyman described him thus: "Babbage wrote with many talents: a natural philosopher and mechanical engineer, his knowledge of factory and workshop practice was encyclopaedic; he was well-versed in relevant business practice; and he was without rival as a mathematician among contemporary British political economists" 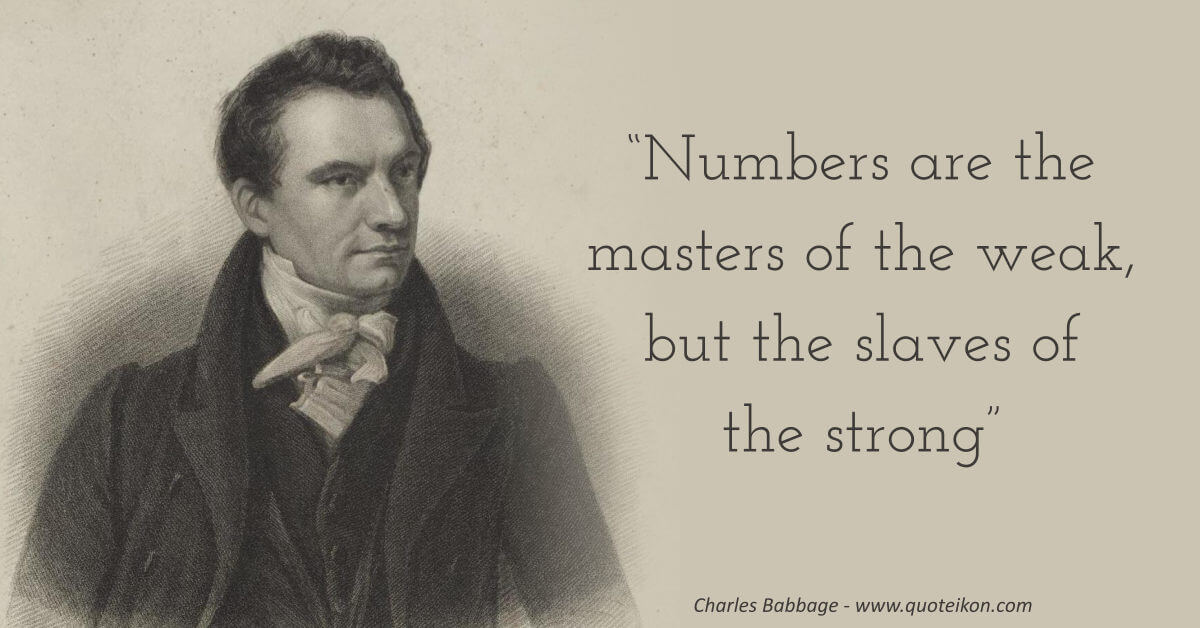