Confucius was his master but rationality was the vehicle that steered his philosophy. His name was Xun Kuang, the eminent Chinese thinker who viewed mankind as inherently evil but argued people can be reshaped by culture and education.

Xun Kuang was one of the great ancient Chinese philosophers whose interpretation of Confucianism is still well read and respected today as it was more than two millennia ago. His life's work has been compiled into a series of books collectively known as "The Xunzi" and many people actually refer to him by name as Xunzi.

The concept of Kuang's philosophy is known as "The Way". Although it is often described as a path or a road, it is actually more of a life philosophy detailing the way to do things. He espouses the way to live, or the right way for a person to act regardless of what adversity is being faced.

In Confucian terms, Kuang draws on the classical Chinese word "Li" where people can derive their Sage education in the form of rituals, customs, propriety, good faith and the laws of nature.

Xun Kuang lived through the warring states period of Chinese history. It was a time of great unrest fueled by the Qin wars of conquest that ultimately led to the first unification of all Chinese states under the Qin Dynasty.

Kuang witnessed first hand the fall of the Zhou Dynasty and the constant friction of both political and physical war led him to believe that human nature when left unchecked by balanced rationality is capable of evil deeds to further their own ambitions.

The reasoning behind Kuang thinking all men are born evil was his study of human behaviour from the cradle to the grave. He viewed childhood naivete as an innate reflex that is temporal and results in evil when dislikes, jealousy and hatred start to bear their influential teeth.

He cites the love of profit as a disease of mankind that will sway the mind to obtain wealth by foul means or fair. Kuang ponders the desires generated by the senses as he notes, without applying restraint, they will lead to degenerate and disorderly behaviour.

Then Xun Kuang turns to the Sages for answers. Their ritual and moral principles were created for the benefit of mankind. These are the guidelines that must be learned to counteract mans innately bad nature. But he argued learning is not enough, it requires effort to master these techniques that will train one's desires and conduct.

His was a dark Confucianism based on his real world experiences. It was a polar opposite to the optimistic Confucianism of Mencius who viewed all men as good, although Mencius did add that goodness was basic in mankind and still required cultivation to flourish.

Although Xun Kuang and Mencius disagreed on the innate state of man at birth, they both agreed that the blank canvas of the mind needed effort to hone its way of thinking and the custom and rituals of the Sages were key to personal cultivation. The inborn nature of man will always succumb to the acquired nature of man, therefore it is imperative to choose the right path of influence to learn from.

Xun Kuang was an important contributor to the inspirational philosophies of the "Hundred Schools of Thought" that were popular in ancient China. His influence cut deep into the fabric of society as the political ideology of the Han Dynasty owed much to "The Xunzi" as they transferred his wisdom to their official state doctrines.

Xun's thinking also rationalised nature by taking god or heaven out of the equation. He is quoted in Xunzi as saying; "You pray for rain and it rains. Why? For no particular reason, I say. It is just as though you had not prayed for rain and it rained anyway". It's meaning is that when it rains after you pray for rain, it is just like when it rains when you didn't pray for it. However government officials must still encourage praying for rain during a drought because of the psychological effect it has on the people. Hope still has to be fueled by something.

Another famous quotation: "Tell me and I forget. Teach me and I remember. Involve me and I learn" is often attributed to Benjamin Franklin but depending upon the translation to English its first recorded use was in The Xunzi by Xun Kuang. His philosophy was all about moral guidance and ritual, it was to train people to constantly practice good habits because they will eventually yield good results.

The thinking of Xun Kuang was more European than traditional Chinese with his pragmatic philosophy of rationalism. He mastered the art of using extended arguments to give a highly persuasive perspective of philosophical discourse. He identified culture as being the unnatural ingredient that needs to be nurtured in man to create the goodness of heart that he believed was absence since birth.

Many observers view Xun Kuang as a pessimist but this is unfair. A more accurate description would be a culturist. A cultured gift from the Sages to do their bidding throughout the ages.

Great ancient philosophers are my favourites for quotes because of the eternal wisdom they propagate so this is my compilation of 22 of the best Xun Kuang quotes.

The writer Ulrich Theobald was impressed to say: "Xun Kuang was highly praised for his wide range and realistic view of philosophical topics. Wang Zhong even said that the philosophy of Xun Kuang widely surpassed the narrow frame in which Confucius had lived and thought"

The scholar Paul R. Goldin spoke of the modern day appreciation of Xun Kuang: "Today the tide has reversed almost completely. Xunzi is one of the most popular philosophers throughout East Asia, and has been the subject of a large number of books published over the past two decades"

The China Daily journalist Wang Ru gave this assessment: "Unlike many idealistic Confucianists, like Mencius, who claimed all humans were inherently good, Xun argued that humans need a good education and should be guided by laws" 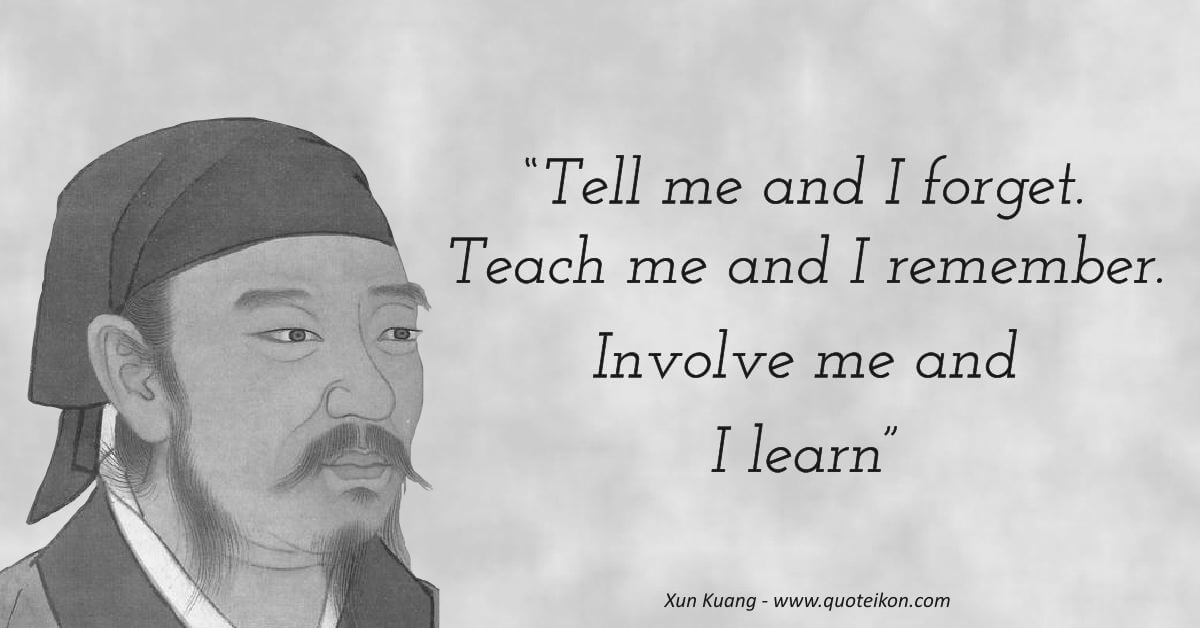