Ugo Foscolo was the Italian patriot who was born before his time but still held his nationalistic beliefs firm and put his life on the line in wars that he believed would take the eight states of the Italian peninsula in a step closer to a unified independence.

Italians have long been known for their passion and Ugo channeled his love for the history of his motherland into his first masterpiece "The Last Letters of Jacopo Ortis" in 1798. This novel was inspired by his shock at what he saw as an act of political treachery by Napoleon Bonaparte when he ceded control of Venice to the Austrians despite defeating the Habsburg Monarchy and their allies in battle in the "War of the First Coalition".

Yet hope sprung eternal in the patriotic mind of Foscolo as he again signed up to fight in Napoleons wars as he saw it as the only feasible opportunity of gaining any shred of independence for his homeland. Bitter disappointments have a habit of strumming the melancholic nature of the creative mind and when the Napoleonic edict of Saint-Cloud was issued and foisted onto Italy in 1806 it had such an effect that it gave rise to the poet burning deep inside the soul of Foscolo.

Ugo paused for thought on the cultural heritage of necrology and the loss to the living world caused by the deprivation of tombstones and monuments that could inspire generations to come. Aghast at this new era of death without recognition his overflowing ink well was drained by his feathered pen as the words of a masterpiece were unfurled on the parchment that lay before him.

Inspiration had taken hold and as he stared down at the 295 verses that flowed from his troubled thoughts he must have felt a sense of relief as the torment was transferred from mind to the written word. This was the poem "Dei Sepolcri" which he wrote in the same year that the controversial edict was enacted and published one year later in 1807.

Foscolo's patriotism saw him suffer exiles and although he never lived to see the Italian independence he dreamed of he would have been proud to have known his remains were repatriated to Italy and interred into the Basilica of Santa Croce in Florence as a hero of the state in 1871.

After the final fall of the Napoleonic empire in 1815 the Austrian rulers demanded a proof of faith from officials and luminaires of the state but Foscolo outright refused and sought exile in first Switzerland and then England until his death in 1827.

He was brave a man of great honour who stood for what he believed in despite the consequences. He was also a wonderful poet who was good for a one liner so this is my compilation of 15 of the best Ugo Foscolo quotes

The literary critic Eugenio Donadoni said of him: "In Foscolo the air of restless grief is highly visible, that desire for peace and oblivion, which was so common to the men and writers of the romantic generation, and who found perhaps his most complete artistic expression in the Renato of Chateaubriand"

The writer Giansante Varrini was gushing in his praise: "Ugo Foscolo, Italian by excellence, and of singular genius, enflamed by the envy of contemporaries, saddened to see the Italian kingdom irreparably fallen ... His need sharply strengthened his ingenuity, and wrote with magisterium on our classics"

Eugenio Donadoni recognised his conviction for fairness: "To him we have seen thinking that justice is the sanction of force, the conscience taught that justice is nothing without equity" 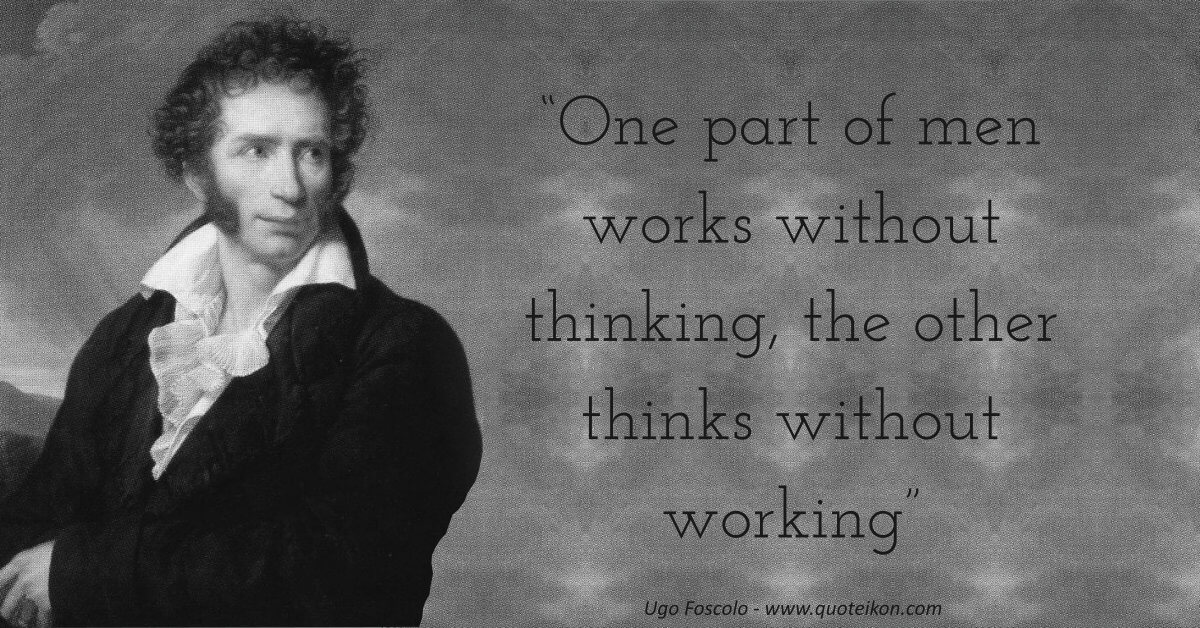