U Ne Win was the Burmese patriot who worked his way up to lead the army and eventually take full control of the country in a 1962 military coup that saw him hold the reins of power for 26 years until he too was ousted in a 1988 coup.

Burma had broken free of the British colonial chains in 1948 which saw a faltering democracy cling to power for a rudderless decade of political in-fighting for power and factional insurgency around the country.

U Ne Win had stepped in as a temporary prime minister during a successful interim military administration between 1958 and 1960 until U Nu won a landslide victory in the 1960 democratic election to become prime minister.

U Nu lasted two years which saw no improvements so U Ne Win staged a military coup to take control of the country in March 1962 and moved quickly to implement changes which he deemed appropriate to the nations needs.

U Ne Win's iron fist came down hard as he used the army to launch an all out offensive against insurgents throughout the country, foreigners were expelled from the country and he virtually nationalised the economy. Political questioning saw hundreds imprisoned and when students at Rangoon university protested they were met with deadly force with dozens killed and injured.

This set the tone for a quarter of a century of isolation behind what became known as the bamboo curtain and his policies which were a mix of Lenin's version of communism, Burmese folklore and Buddhism merely resulted in a negative effect where he took the nation from prosperity to poverty.

By 1988 with the economy on the brink of bankruptcy U Ne Win resigned which sparked protests pushing for democracy until the military brutally put down the uprisings.

U Ne Win was now an old man who took on an advisory role in the background, but his influence waned as each year passed. He was one of the last great Asian dictators of the 20th century and this is my compilation of 12 of the best U Ne Win quotes

Quotes About U Ne Win

The New York Times editor Joseph Lelyveld gave this assessment: "He had a kind of nutty candour and some idea of the rest of the world, however limited. He was highly regarded in those [early] days. No one suspected he’d prove to be as erratic as he later showed himself to be. Most Western diplomats regarded him as a modernising figure… they were of course spectacularly wrong"

His grandson U Aye Ne Win poured scorn on the conspiracy theories of amassed wealth: "If we would have stolen or accumulated money, there should be a paper trail, or the documents should have surfaced, for instance at WikiLeaks. No country has ever frozen or confiscated assets of the family. That itself is a clear indication"

U Aye We Win went on to question the merits of democracy over dictatorship: "Even democracy can’t guarantee that you won’t get a ruler like Adolf Hitler; he was democratically chosen, a majority of the people in Nazi Germany supported him"

The author Tillman Durdin shared this observation: "Mr. Ne Win was a husky, hot-tempered, quick-witted martinet driven as much by a strong taste for discipline as by personal ambition"

The biographer Robert H Taylor had researched him for years: "The challenging thing is to try to think back to what things were like when General Ne Win lived. We know today Myanmar and the world are very different. He lived before television, before mass media and before radio. It was different. The work is trying to understand the man without having ever met him and trying to get into someone’s mind without knowing him. It was very difficult" 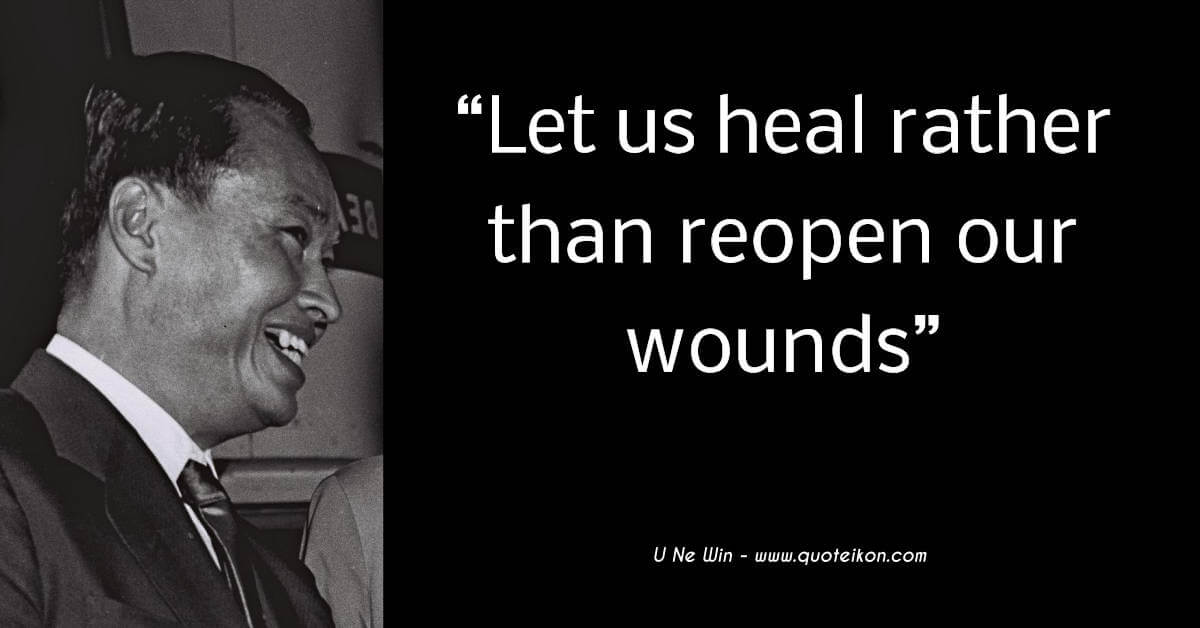