The legacy of the educator is best viewed from the view of the students. The is where the legacy of Paul Engle was marked top of the class with an A++. (Read the quotes about Paul Engle from some of his former students in subsequent paragraphs).

Together with his soon to be wife Hualing Nieh, Engle established the University of Iowa’s International Writing Program. In excess of 1500 aspiring writers have graced the hallowed halls of the IWP since its 1967 inception.

In 1976 more than 300 writers were inspired to nominate Paul Engle for the Nobel Peace Prize, he did not win but it did highlight the exceptional work he put into educating poets and writers from all over the globe. In 1990, the American Academy and Institute of Arts and Literature rewarded him with the Award for the Distinguished Service to the Art.

He may not have been the founder of the Iowa Writers’ Workshop at the University of Iowa, but, he was the driving force that established it as the top graduate writing program in the U.S. His tenure as director lasted for twenty-four years and in that time he built its reputation by securing the leading lights of the writing world to serve as teachers to the greatest wealth of writing talent each generation could muster.

A great barometer to measure an educators legacy is in literary awards; the faculty and graduates affiliated with the Iowa Writers’ Workshop have been busy collecting Pulitzer Prizes with 18 winning the coveted award for poetry whilst a further 10 picked up the award for works of fiction.

Aside from his own poetry and written word, his lasting legacy is the spark of creativity he meliorated in wave after wave of ambitious students aspiring to ascend the world of letters. Under his watchful eye, he nurtured the talented and encouraged the creative to explore every crevasse in the inkwells of the writing mind. The results speak for themselves with an impressive alumni whose success is legion.

A Nigerian chief, Okogbule Wonodi, was inspired to write: "I am personally convinced that you have done more in creating an atmosphere of peace and mutual respect between citizens of different parts of the world than most loud-talking politicians."

In a NYT review of Engle's "American Song: a Book of Poems", the critic J. Donald Adams was impressed to state: "He drinks deep, from that well from which every creative artist must--love of place, the sense of being somewhere rooted"

The novelist Philip Roth shared this observation: "Paul Engle's Iowa Writing Workshop is one of those places, like Elizabeth Ames' Yaddo, that made life easier and pleasanter for hundreds and hundreds of writers. Iowa City is what a whole generation had, instead of Paris. And it wasn't so bad, either"

Gwendolyn Brooks talked glowingly of the Paul Engle review in the book section of the Chicago Tribune: "the review that initiated my reputation"

The writer Kurt Vonnegut spoke positively of Engle: "He's an extremely important man culturally. I can't think of any institution, except maybe the Guggenheim Foundation, that has encouraged as many writers as the Iowa workshops"

Vonnegut, quite conversely, shared this alternative view: "The former head, Paul Engle, is still around, is a hayseed clown, a foxy grandpa, a terrific promoter, who, if you listen closely, talks like a man with a paper asshole"

The Hungarian poet Agnes Nemes Nagy remembered him fondly: "My dear Paul, I think of you as a pillar holding up the program, its events, its trips, a pillar with beautiful hand-embroidered shirts and with a sense of humor"

The former New York governor W. Averell Harriman was inspired to say: "I have known the Engles and watched their dedicated efforts to bring peace and understanding to the world by bringing writers of every country, language and culture to their program in Iowa City . . . It is important to note that they were not asked to undertake this difficult program by a goverment. They invented the idea and gave their years to raising the funds to finance it from many sources, most of them private individuals and corporations. This is unprecedented in the history of international relations, which are almost always governments talking to governments"

The Polish poet Zbigniew Bienkowski described his poetry thus: "In Paul Engle’s poetry they acquire an elegiac tone which may account for its lack of sharpness. His poetry does not aim at intellectual synthesis or dramatic tension. Read today, it seems out of the museum of primitive American sensibility"

The poet Robert Bly shared this assessment: "When I sat down in Paul Engle's workshop, it was the first time I had ever seen that strange thing, blue dittoed poems. I was amazed. It seemed beneath the dignity of art to mimeograph poems"

The Israeli writer Avraham B. Yehoshua assessed Paul's impact and status: "When I read the reports sent to me from Iowa about Paul Engle and his wife and when I hear my Israeli friends return from Iowa and sing his praise, I realize that before my very eyes this midwestern poet is becoming a genuine legend. And I always rejoice that I had the opportunity to touch this legend"

The Romanian author Aurel Dragos Munteanu was moved to say: "It is a fact that Paul Engle is one of the most noted poets in the last decade in the United States, and, without a doubt, the greatest in the Midwest. He has written tens of books of verse, he has affected the fate of creative writing as the director of the workshop by the same name at the University of Iowa, he has militated for the establishment of a writer’s rights in his country; in a word, he is a personality"

The Indian poet Shrikant Varma recognised his worldwide value: "Paul Engle is an American poet. But he is more than that. He founded and built Iowa’s famous International Writing Program. This is a unique manifestation of the American academic community’s willingness to honor the world’s literary talent irrespective of ideology"

The Polish poet Artur Miedzyrzechi described his character: "What made Paul unusual for me was his optimism, his magnificent vigor, and his poetic ability to create a truly alternative world—the world he himself called “Engle Country” and whose essence is also conveyed in his poem, “Paul,” which includes passages of unmistakable originality and Whitman-like dynamism"

The Czech author Arnošt Lustig spoke of his significance: "It was necessary to meet writers’ most basic creative need: that is, to offer them a place where they might create for a certain period of time, undisturbed by the pressures of a job. At this moment such a place exists, and it bears the mark of its founder, the poet Paul Engle. He has made Iowa City a town of first-rate importance, a town that has the same significance for writers that Mecca has for Mohammedans and that Geneva once had for supporters of League of Nations"

The poet and novelist Margaret Walker shared this view: "He was my friend, with whom I fussed and fought every day over what I was writing. He’s just been a friend. He and I never agreed on anything, but he was always on my corner"

The cover of a New York Times Book Review heralded Engle as: "A New Voice in American Poetry" 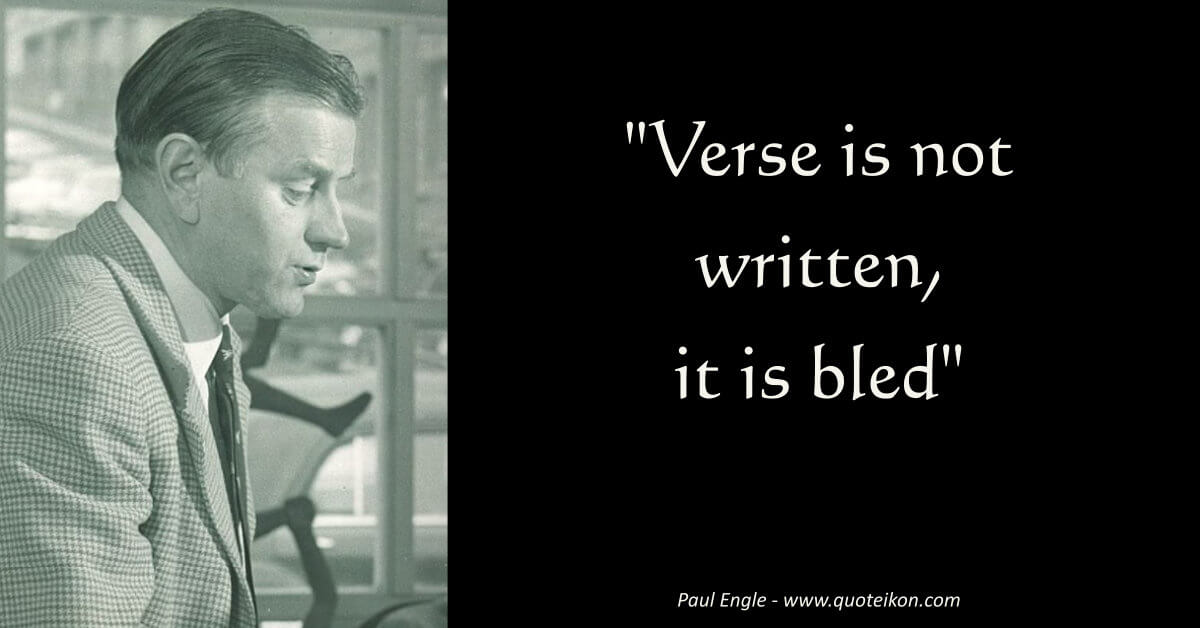