Marc Chagall was the last of the original European masters of modern art and his distinctive style was quite unique in the disciplines of the brush he mastered. After a happy upbringing in his home town of Vitebsk (in what is now Belarus) where his Jewish roots had a major influence on his thinking, he learnt the fundamentals of art from copying images from books in the schools library.

He was so absorbed by artwork he knew that was all he ever wanted to do so he implored his parents to allow him to enter the local art school. He later progressed to study at a St Petersburg art school but nothing would stimulate his artistic imagination as his next destination was to be the capital of the art world Paris.

It was here he experimented with different mediums such as etchings, gouache, murals and watercolors whilst steeping himself in the movements of Cubism, Surrealism and Symbolism. Chagall's artistic prowess saw him master all the modern media styles but then he used them all in his own unique way by adding the influence of his upbringing and background into everything he created.

Some of his results were wondrous and even Pablo Picasso was taken aback as he was quoted as saying about Marc Chagall: "I don't know where he gets those images; he must have an angel in his head", high praise indeed from one of the greatest masters of modern art.

Many of his paintings were destroyed during the Nazi nightmare of 1930's Europe and he was forced to flee his French home to America using forged documents to escape the Adolf Hitler Nazi death camps. He didn't settle so well in the U.S. and he lost his beloved wife Bella Rosenfeld in 1944 and he was then stunned to learn that the Germans had razed his home town (Vitebsk) to the ground.

After the war ended he returned to France although he never quite summoned the great paintings of his earlier career he still made his mark with some wondrous work as a stained glass artist in synagogues and cathedrals across Europe and the U.S.

In 2017 a Chagall masterpiece from 1928 sold at Sotheby's auction house in New York for $28.5 million USD. The subject of the painting was his beautiful wife Bella Rosenfeld who posed for many other of his famous works such as "Bella With White Collar" from 1917. Away from the canvas he was good for a one liner also so this is compilation of 15 of the best Marc Chagall quotes

The French poet André Breton described him thus: "With him alone, the metaphor made its triumphant return to modern painting"

Pablo Picasso was moved to say this of his contemporary: "When Henri Matisse dies, Chagall will be the only painter left who understands what colour really is ... Some of the last thing's he's done in Venice convince me that there's never been anybody since Renoir who has the feeling for light that Chagall has"

Museum director Jean-Michel Foray said this of his biblical works: "Some art historians have sought to decrypt his symbols, but there's no consensus on what they mean. We cannot interpret them because they are simply part of his world, like figures from a dream" 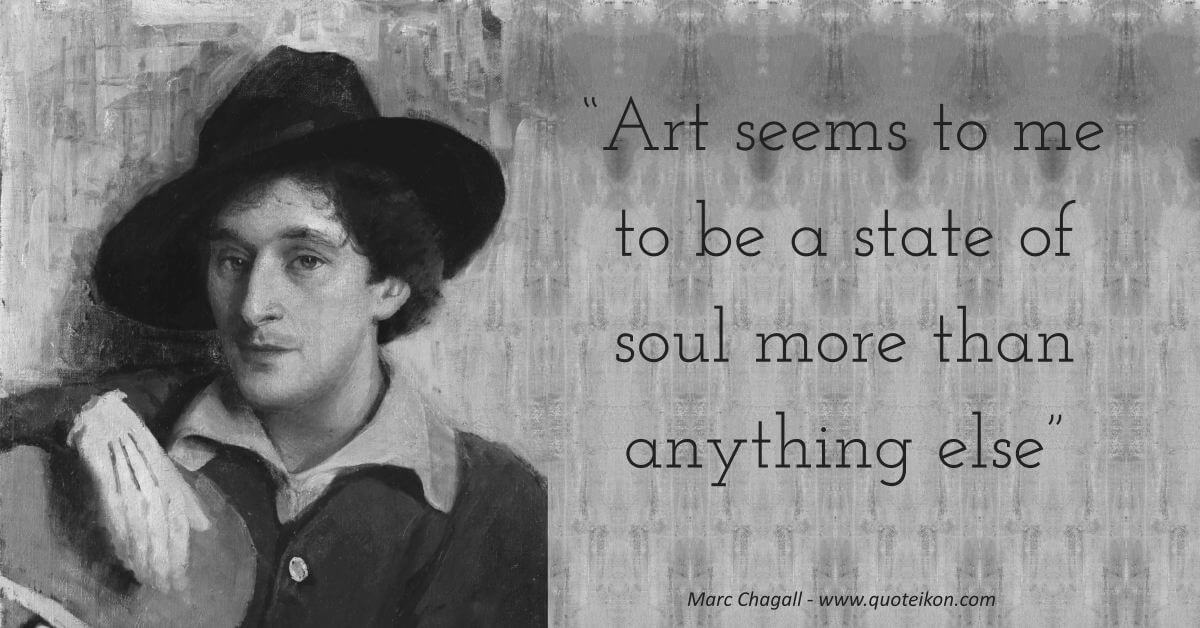