Lillian Hellman was the talented but headstrong writer who stayed true to her views on free speech and politics throughout her successful but somewhat rocky career. She started out writing summaries of books to gauge their potential to be turned into big screen movies for Metro-Goldwyn-Mayer.

She eventually upped sticks from Hollywood to try her luck as a playwright in New York and it wasn't long until the shining light of success was illuminating her literary prowess for a drama. Her first Broadway hit was The Children's Hour in 1934 that ran for 691 performances. Samuel Goldwyn purchased the rights for this play and Lillian soon found herself back in Hollywood working as a screenwriter for Goldwyn Pictures earning a colossal (at the time) $2,500 usd a week.

After rewriting many screenplays for Goldwyn she returned to the bright lights of Broadway where the play "The Little Foxes" became an epic success.

After WWII the U.S. was entering a different era and the cold war saw a sea change of mood towards left wingers and communists in particular. Hellman was threatened with blacklists and IRS investigations but all through these turbulent years she held firm her belief for freedom of speech and although she admitted to dallying in communism she denied ever being an ardent red.

After all the investigations Lillian Hellman was quoted as saying: "I wasn't as shocked by McCarthy as by all the people who took no stand at all....I don't remember one large figure coming to anybody's aid", she went on to say: "I suppose I've come out frightened, thoroughly frightened of liberals. Most radicals of the time were comic but the liberals were frightening".

Never one to back down in a controversial moment, Hellman and the actress Tallulah Bankhead who was the star of the play The Little Foxes had a public tiff which resulted in Lillian slamming her handbag in the stars face. They never spoke for 25 years after this incident

She penned books in later years and toured the country giving speeches upon invitation. Great minds often create great one liners and their famed status gives these words extra meaning, so here is my compilation of 17 of the best Lillian Hellman quotes

The actress Tallulah Bankhead speaking about their rift: "Great as is my admiration for Lillian Hellman as a playwright, I could never again rejoice in her company"

J. Edgar Hoover wrote in a 1943 FBI memo: "You are reminded that this subject has a national reputation through her writings in which she has opposed Nazism and fascism. Under no circumstances should it be known that this bureau is conducting an investigation of her"

The critic Mary McCarthy was unrepentant: "If someone had told me, don't say anything about Lillian Hellman because she'll sue you, it wouldn't have stopped me. It might have spurred me on" 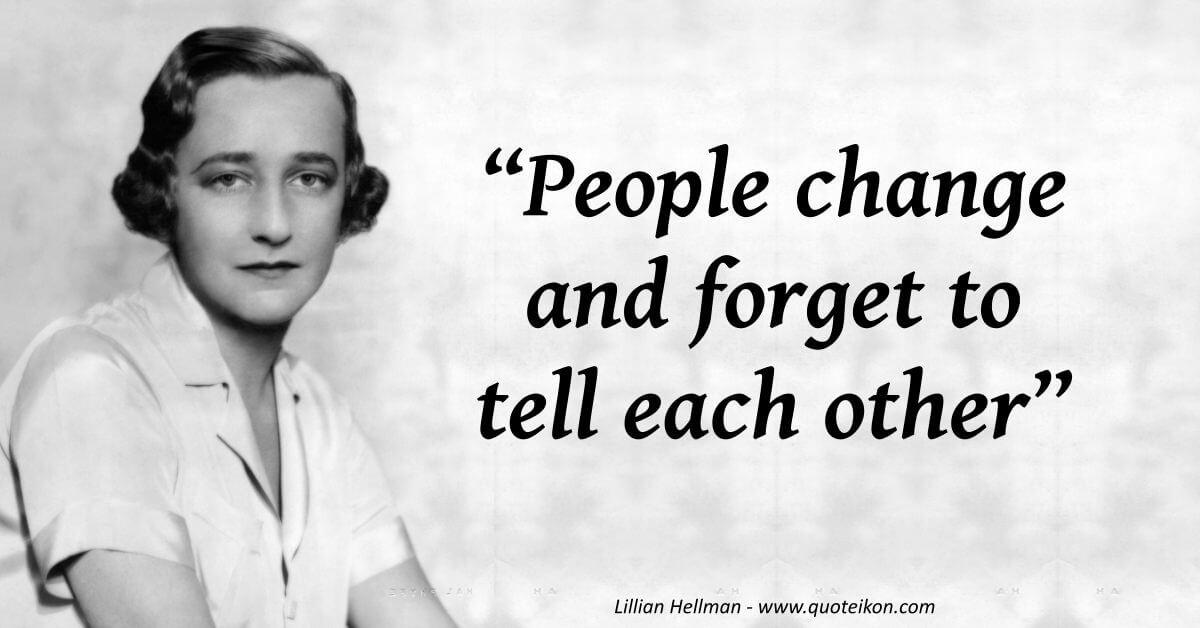