Kathe Kollwitz was the Prussian born artist who specialised in portraying grief in paintimgs, drawings and statues and gained international recognition as the most prominent female German artist of her era and the twentieth century.

The tortured artist is a common theme that has run through the creative talents from the torment of Michelangelo to the ear cutting of Van Gogh and it seems artists have to feel the pain of great grief to tap into their inner most brilliance. Kollowitz from an early age used her art to highlight the plight of the oppressed, impoverished or downtrodden but it was a personal tragedy that really sparked the creative genius to rise into the realms of monumental fine art.

She readily admitted she led a happy life up until 1914 but her life would change forever as she lost her son Peter in the first few weeks of WW1. She was devastated by grief and wracked with guilt about not doing more to prevent him from volunteering.

In a graphic illustration of art imitating life her prints and statues gradually started to embody the pain she was feeling, to the observer you can feel the desperation and pain in her art. An emotional entry into her diary in 1920 left a poignant Käthe Kollwitz quote when she wrote: "Art should grip and shatter the human heart", and indeed her art certainly attained this level of emotional feeling.

From the moment of her sons pointless death she drifted into becoming a fully blown pacifist both vocally and artistically which led her to losing her position as a professor on the Prussian Academy of Arts in 1933 as the Nazi regime of Adolf Hitler deemed her as unpatriotic. She remained outspoken and three years later the Gestapo wanted to send her and her family to a concentration camp but her international recognition was her saving grace.

The futility of war was to hit home again in a recurring nightmare when she lost her grandson, also named Peter, in the Russian theatre of war in 1942. These days her art graces the streets of Berlin and can be seen in a number of museums displaying the fruits of her artistic talents. She was also good for a one liner so here is my compilation of 15 of the best Kathe Kollwitz quotes

The author Rory MacLean said this of the talented artist: "Kathe Kollwitz took life as it was and, charged yet unbroken, captured in her art the pain suffered in this place by its mothers and children"

Director of the Käthe Kollwitz Museum Dr. Iris Berndt said: "She is the standard when it comes to selflessness and furthering the cause of the weak and the vulnerable"

The German dramatist Gerhart Hauptmann said: "Her silent lines penetrate the marrow like a cry of pain; such a cry was never heard among the Greeks and Romans" 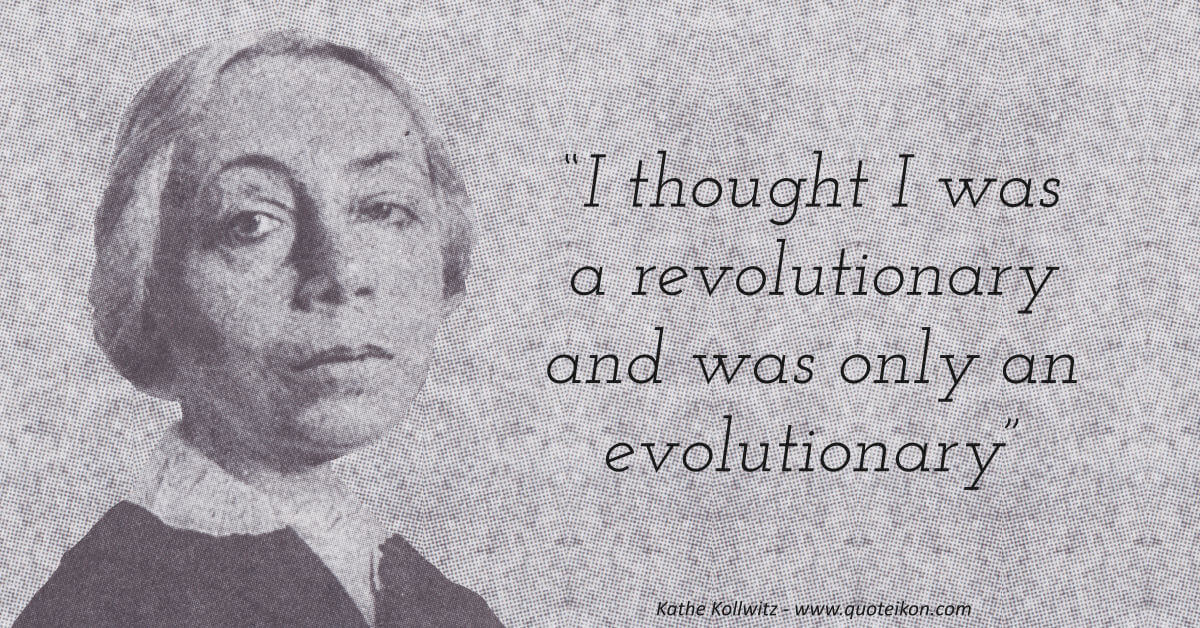