The history of Cuban revolution is littered with firebrands, idealists, heroes and villains. From Tomás Estrada Palma to Fidel Castro they all walked in the footsteps of one man whose influence inspired a nation to finally stand up and break the bondage of servitude to Cuba's colonial masters. His name is José Martí, the poetic philosopher whose death and subsequent martyrdom was the catalyst for change in the Cuban war of independence.

Recent Cuban history may have been dominated by political figures such as Fulgencio Batista and Fidel Castro. They may have led two contrasting regimes, but they both hailed Martí as the Cuban national hero for his leading role in liberating Cuba from the Spanish.

All roads may lead to Havana, the traditional hot-seat of Cuban power. But to understand Cuba, one must also recognise a nation with a perceptible sense of its own soul. To this day, the power of this poet is measurable across all classes of Cuban society. José Martí is a unifying force when common ground is needed in times of adversity.

The 1868 Ten Year War for Cuban independence ignited the flames of nationalistic pride in José Martí and was the spark for his political awakening. The poems & the prose both began to flow freely through the inkwell of Marti's mind. Notable works published at this time were were "Abdala" and "10 de Octubre".

1869 was a pivotal year for the 16 year old Marti. The Spanish closed down his school further fueling his colonial resentment. On 21st October he was arrested for treason and sentenced to six years imprisonment. With Marti still being a minor, the authorities commuted his sentence to exile in Spain where he was allowed to continue his studies.

Exile in Spain did little to curtail the voice of liberation burning in Marti's mind. The poetry became polished and his letters to the press were published. Jose even wrote to the Spanish Prime Minister pointing out the hypocrisy of The Spanish Republic calling themselves a democracy whilst keeping Cuba in colonial chains.

In 1875 José Martí returned to the America's on the condition he did not return to Cuba. His first destination was Mexico and then Guatemala. He was already an established writer and he steadily built up his sphere of influence by writing articles for premier publications across Latin America.

By 1881 Marti was based in New York. His persuasive pen filled columns on all aspects of life relative to the America's. When not writing editorials, Jose was drumming up support for Cuban independence. In every town he visited, Marti sensed the enthusiasm for revolution was growing. The time for action was approaching.

In 1892 Marti founded the Cuban Revolutionary Party to further the revolutions support and raise funding. He spent the next three years organising the liberation movement and planning the colonial demise of Spain. He was also acutely aware of the imperialistic ambitions of the U.S.A. The stakes were high, Jose Marti knew that any prolonged military engagement to overthrow the Spanish would increase the likelihood of U.S. intervention. The last thing Cuba needed was to free itself from one imperialist force only to find itself under the yoke of another.

The carefully laid blueprint of revolution seldom follows the intended plan. A pre-invasion failure on 12th January 1895 proved calamitous but not disastrous for the forthcoming revolt. Florida port authorities seized three ships that were fully ladened with weapons and armaments heading for Cuba. Sourcing weapons is never an issue, sourcing the money to fund the payment to greedy arms manufacturers is. More rounds of fund raising were required which caused a delay in mobilising the revolution.

It was on 1st April 1895 when José Martí finally set sail to Cuba with his fellow revolutionaries. They quickly made contact and established communication with Cuban rebels on the island. Within a fortnight Jose Marti would be martyred to the cause of revolution at the young literary age of 42 years.

There has been a lot of speculation about the death of José Martí. He was a writer not a soldier, yet he felt the need to prove himself on the battlefield. There is another theory that he purposely martyred himself to become the catalyst that would engage the masses of Cuba to join the fight for independence.

The night before his death, José Martí put pen to paper to write: "Every day I am in danger of giving my life for my country and for the duty . . . of preventing in time, with Cuba's independence, the United States from spreading through the Antilles, and with that increased strength, overpowering our lands of America." He knew a drawn out battle with the Spanish would intensify American imperial interest, it could have been Marti's plan to become a martyr to hasten the defeat of the Spanish.

The legacy of José Martí is more than just a symbol of Cuban resistance, he is revered as a revolutionary idealist whose beliefs in Latin American independence formed the cornerstone of political ideology that shaped the modern Latin American identity.

The life and death of José Martí moulded the national imagination. He opened the eyes of Cubans to the realisation that they can shape a dignified future for their children free of the chains of servitude to imperialists. His beliefs shone like a beacon for Latin American sovereignty.

As the Cuban national poet his influence remains as strong as ever and his words of wisdom inspired me to compile this list of 32 of the best José Martí quotes.

Historian Philip Foner reflected on Marti's urgency to revolt: "Martí's impatience to start the revolution for independence was affected by his growing fear that the imperialist forces in the United States would succeed in annexing Cuba before the revolution could liberate the island from Spain. Martí noticed with alarm the movement to annex Hawaii, viewing it as establishing a pattern for Cuba"

Spanish Captain General Ramón Blanco was blunt in his assessment: "That Martí is a madman - but a dangerous madman"

The author Roberto Gonzalez Echevarria shared this observation: "In Latin America, Marti represents an idealized fusion of politics and poetry"

The historian Lillian Guerra highlighted the PR aspect of his status: "The historic tendency of Cuban political activists to appropriate Martí’s image and interpret his words for their own purposes is well known"

The Grenadian revolutionary Maurice Bishop recognised his importance: "While it is the sovereign right of the Cuban people to cherish Jose Marti as their own son of the soil it can be said honestly and accurately without the slightest disagreement from the unselfish, Cuban people that Marti belongs not only to Cuba but to all of the Americas"

The Cuban historian Jaime Suchlicki highlighted his importance to the revolution: "His ideas formed the foundation on which the revolution rested"

Another historian Erna Fergusson shared this anecdote: "His words are quoted like Biblical sayings"

The Cuban writer Eduardo Abril Amores echoed his legendary status: "Martí is the liberator of always and forever"

The author John M. Kirk spoke of his influence: "Carlos Prío, Fulgencio Batista and Fidel Castro have all claimed to be putting into practice the philosophy of Martí"

The Cuban ambassador to Jamaica Yuri Gala López spoke of his place in the annals of Latin American history: "Cuba would not be the nation it is without Jose Martí, and in many ways, his influence is still felt throughout the Caribbean and Latin America" 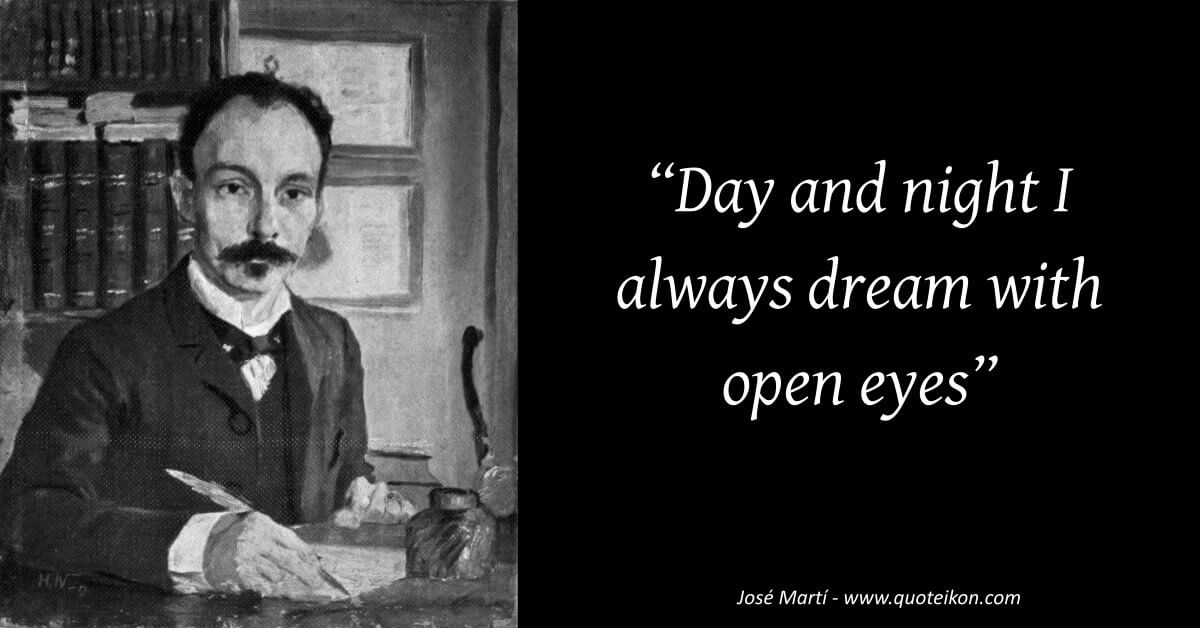