Johns Hopkins was the successful Maryland businessman and abolitionist whose far sighted philanthropy still benefits the citizens of Baltimore to this day.

After making his money through business and wise investments he financed the founding an orphanage, a hospital and a university with the total being bequeathed amounting to the largest sum ever donated to an American educational and medicinal institution up to that date.

The Johns Hopkins University went on to revolutionise higher education in the U.S. as it combined teaching with an integrated research facility. In the same vein the Johns Hopkins Hospital became a world renowned biomedical research facility that provides integrated healthcare for all patients. At the time he envisaged a training school for nurses in accordance with the template first suggested by Florence Nightingale and the resulting Johns Hopkins School of Medicine is now a consistently top ranking medical school in the U.S.

In line with his abolitionist views he ensured that all races would be provided for in his institutions setting a shining example of philanthropy that knew no racial barriers. His legacy will be remembered for centuries to come in Baltimore and he was also good for a quick quip, so this is my compilation of 10 of the best Johns Hopkins quotes

On Tuesday 18th March 1873 the Baltimore city official Mr Kerr was grateful on behalf of the city: "Johns Hopkins has nobly contributed to the future welfare and happiness of our people, and should receive every evidence of public appreciation and gratitude; therefore, Be it resolved by the Mayor and City Council of Baltimore, That the practical and unostentatious charity of Mr. Hopkins, in thus disposing of the wealth which he has accumulated in Baltimore during a life of extraordinary activity, success and usefulness, for the benefit of her own people, has not merely enrolled his name in the list of famous benefactors of mankind, but furnishes the most striking proof of the sincerity and earnestness of his purpose"

In its obituary The Baltimore Sun paid high tribute: "In the death of Johns Hopkins a career has been closed which affords a rare example of successful energy in individual accumulations, and of practical beneficence in devoting the gains thus acquired to the public" 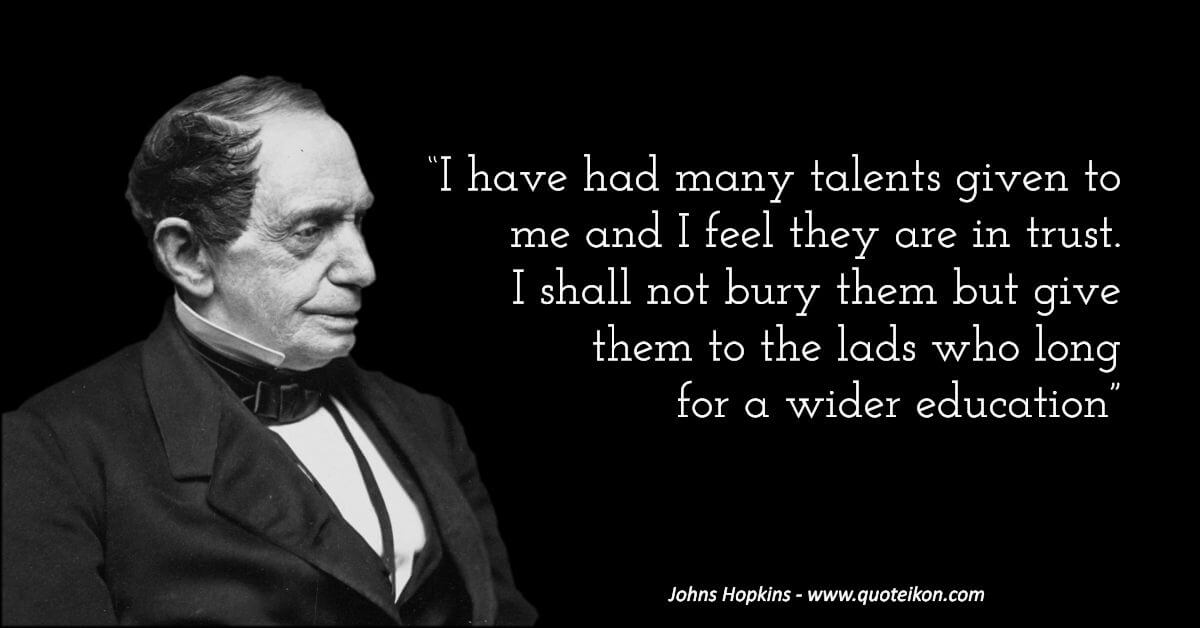