James Keir Hardie struggled through a childhood of suffering and poverty so extreme that it became the stuff of legends, as he rose above all obstacles in his way to start a political party in 1893 that within 30 years would be elected as the government of the U.K.

Fatherless the young James Keir started working at the grand young age of 8 at a bakery which was a position he would be unceremoniously sacked from at the tender age of 10. The story is legendary as one morning there was not a scrap of food in the bare shelves of his house and he was tending to his sick mother which caused him to be late for work. He arrived at the bakery hungry and late only to be faced by his stern employer, a baker who after polishing off his ample breakfast sacked the distraught boy for bad time keeping.

Undeterred Hardie got himself a job in the local coal mine working as a trapper, it was a simple but important and dangerous job as in his 12 hour shifts he had to open and close trap doors to allow air to flow and let the coal tubs through. Todays millennials have grown up with computer games, McDonalds and Starbucks whereas Keir Hardie grew up down a coal pit, but were it not for this boys bitter childhood experiences the political colossus he was to become would never have existed.

As he became a man he self educated himself in what little spare time he had and an awareness of humanism was growing on him which led him to start a mining union. A few strikes later he was quickly banned from working in any local mines but the light for the welfare of workers was lit and it would never be extinguished.

A political career beckoned but he quickly saw through the phoney liberalism and with some like minded colleagues they founded the Independent Labour Party which would eventually become the Labour party. He realised the whole political spectrum was self serving and in one moment of disgust Keir Hardie was quoted as saying: "More and more the House of Commons tends to become a putrid mass of corruption, a quagmire of sordid madness, a conglomeration of mercenary spiritless hacks dead alike to honour and self-respect".

He was the first leader of the Labour party and he left no stone unturned as he pressed for social change, years later another Labour legend Tony Benn was quoted as describing Keir Hardie as: "Labour's first, and in many ways, greatest leader". As a leader he was selfless, as a man he was kind and considerate and as a politician he was the biggest thorn in the side of both the established parties.

Because of the timing of his death in 1915 he was lambasted in the press who deemed him as "one of the most hated men of his time" and not one member of any other political party was present for his funeral. All those who spoke ill of him during his lifetime are now long forgotten, but as the years have progressed the reputation of Keir Hardie has grown beyond what he could ever had imagined.

Powerful and meaningful speeches aside, Keir Hardie also put pen to paper to write a collection of books that were well received by the critics.

As a politician his speeches are now revered by socialists worldwide, he was good for a one liner also, so here is my compilation of 15 of the best James Keir Hardie quotes

James Connolly of the Workers Republic spoke in tribute to his contribution to politics: "James Keir Hardie was to the labour movement a prophetic anticipation of its own possibilities"

Philip Snowden described him thus: "He was the unsparing iconoclast who sought to break the illusions and conventions of his generation"

Prime minister Clement Atlee looked back at his achievements glowingly: "Few members of parliament had a greater effect upon the House of Commons than Keir Hardie"

Labour's first prime minister Ramsay MacDonald recognised his achievement: "He will stand for ever as the Moses who led the children of Labour in this country out of bondage"

The author Kenneth O. Morgan spoke fondly of him: "I found him a man who was not only an idealistic crusader, but a pragmatist ... he had uniquely the charisma and vision that any radical movement needs" 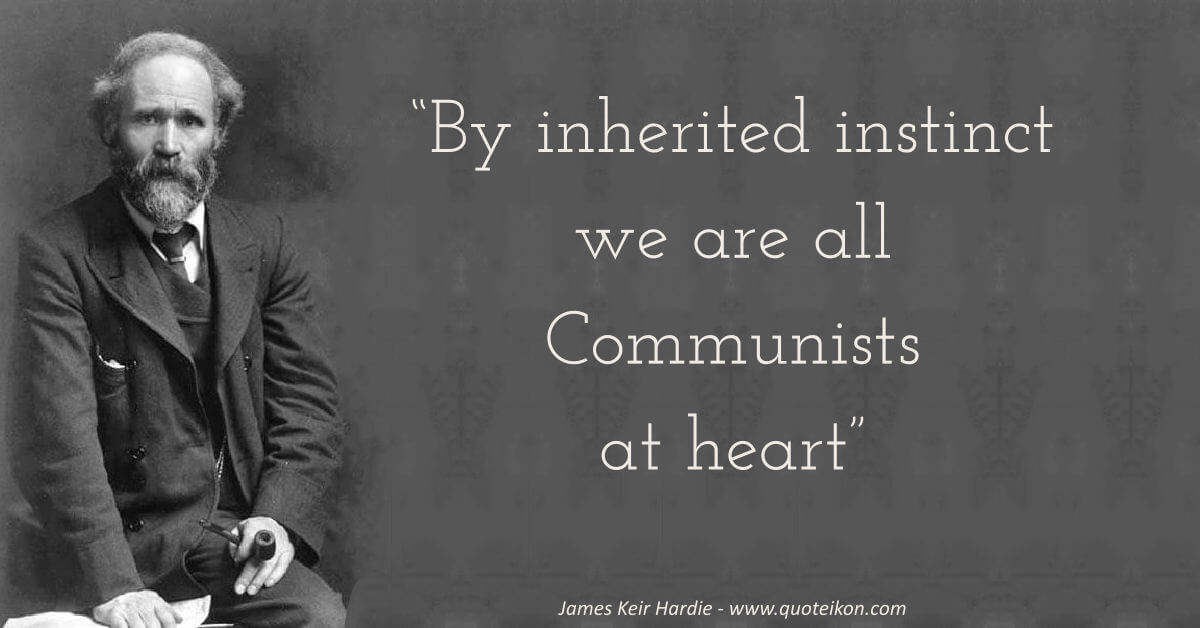