Based in Berlin but of Italian and German heritage Giovanni Morassutti is more than just an actor as his journey has saw him sit in the directors chair as well as delve into a successful career as a cultural entrepreneur. From an early age Giovanni dreamed of becoming an actor and emulating his heroes of the silver screen Giancarlo Giannini, Montgomery Clift and Marlon Brando.

As a teenager he followed his passion by immersing himself in the thespian methodology of realism under the creative tutorage of Susan Strasberg before moving to join the Actors Studio in the heart of New Yorks theatre district and furthering his learning under the guidance of Salem Ludwig at the HB studio in Greenich Village. Whilst learning his trade in the U.S. he secured some varied off Broadway production roles working with African-American theatre director and producer Ellen Stewart, founder of La MaMa Experimental Theatre Club with whom he did also work at her artist retreat on the hills of Umbria near Spoleto where the Festival of the 2 Worlds takes place.

He was also cast in the 2005 Gus Van Sant movie "Last Days". The young Morassutti also came under the watchful eye of John Strasberg whose family is steeped in thespian history and they continue to work together in various theatrical collaborations such as are held at the "Art Aia - Creatives / In / Residence" where Morassutti is the artistic director and founder of this Italian acting institution.

Giovanni is also the creative director of the exciting project "Art Aia – La Dolce Berlin" that promotes cultural activities, artistic experimentation and Italian wine. His thirst for expanding his acting experience knows no bounds and after graduating from the National Film School in Rome directed by actor Giancarlo Giannini he was cast in several roles in theatre and film productions including "I Viceré" by Roberto Faenza (2007), "Ventisette" by Stefano Usardi (2011) and "For The Time Being" directed by Daniela Lucato (2018).

As a theatre director he made his mark in New York at the Cherry Lane Theatre with his rendition of "Sola In Casa" by Dino Buzzati starring Lydia Biondi in 2012. Back in Italy he crossed the cultural barriers by directing the moving tale of "Madre Sin Panuelo" by Jorge Palant in a theatre production sponsored by the Argentinian embassy and played out on the stages of Artemia Cultural Center in Rome and Spazio Mil in Milan.

As I am a passionate football supporter I contacted Giovanni to see which Italian football team he followed, the answer I got both surprised me and left me with an endearing image of the genuine good nature of the man, and this is his reply: "I am not really into sports and even if I am Italian I don´t follow soccer. I would say that for me the best expression of sports can be seen in the solidarity expressed by wheelchair fencer Bebe Vio dedicating the gold medal to promising swimmer Manuel Bortuzzo, paralysed after being shot in Rome. Their humanity, courage and determination define healthy sports and makes me proud of being Italian". Reading quotes like that it makes me happy to write these bio's, but there is more where that came from so here is my compilation of 19 of the best Giovanni Morassutti quotes

His mentor John Strasberg spoke glowingly of his protégé: "Giovanni was very serious studying in New York and suffered a lot I think. When my work really, really has value is not just somebody who is learning how to act is someone who is actually discovering himself and their own creative process and i think that Giovanni is one of those people where that was what happened. That is the reason why we still know one another and why I am here"

The director Vito Pagano was gushing in his praise when he said: "Giovanni Morassutti as the leading actor in my movie Amigdala performed the miracle. In the long shot monologue he gave me what I wanted. Actually he gave me a better performance than i had imagined"

Italian film critic Concita Occhipinti was moved to say: "Morassutti is a particular actor with masterful vocal and acting abilities and he is very close to Giancarlo Giannini since he studied with him at the Centro Sperimentale di Cinematografia"

The South-american Journalist and theatre critic Ernesto Pérez saw him capture the essence of a tense drama: "In staging Madre sin Panuelo the young Morassutti demonstrates his gift of enlivening a claustrophobic scene" 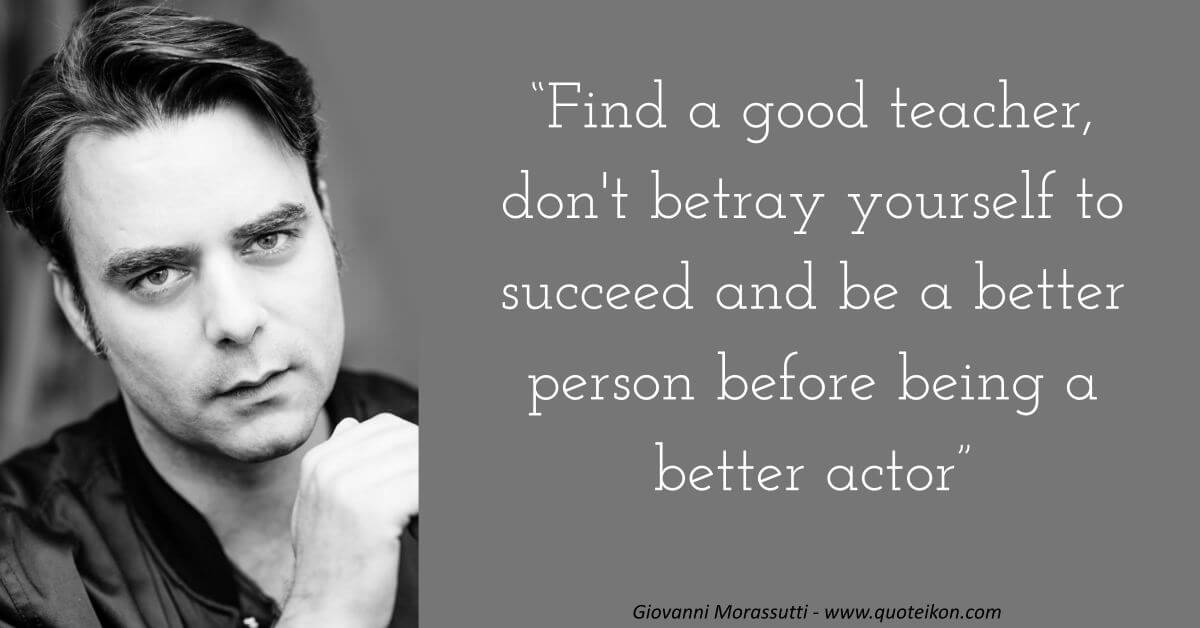