The rise and fall of Ferdinand Marcos is a perplexing story of hope vanquished by the intoxication of power relinquishing the common good for the insatiable avarice of the individual and the crony. The arbiters of history have not written kindly of the 20 year reign of power of the 10th President of the Philippines as the considered opinion consistently labels him as one of the greatest kleptocrats of all time.

Climbing the slippery pole of power is never an easy task and although his final ascension into the hot seat of the corridors of Filipino power could be described as fairytale he had previously overcame many trials and tribulations. In 1938 Ferdinand was charged and convicted for the 1935 murder of one of his fathers political rivals Julio Nalundasan and he faced the death penalty for premeditated murder. In a last ditch appeal to the Supreme Court of the Philippines he had the verdict overturned and was acquitted on all charges despite two witnesses implicating him as the person who pulled the trigger.

During WW2 there is little doubt that Marcos fought in the Battle of Bataan but the degree of his involvement in the war against the Japanese became the subject of sceptical disagreement during his 2nd term in office after his embellished version of events proved a big vote winner in his initial election to power in 1965.

In the run up to the 1965 presidential elections Marcos raised the hopes of the whole nation with the country buying into his campaign promising economic reform, but it was more than just political rhetoric that saw him swept into office as his wife Imelda Marcus who had been written off by the press as a trophy wife proved a formidable ally in his camp. They were portrayed as the president in waiting and his first lady in a not so cryptic comparison to president John F. Kennedy and his glamorous wife Jacqueline, the inferred Kennedy references did not stop there as there was a Camelot feeling generated by the Marcos campaign entourage that gave the country a feel good factor in the form of renewed hope for the nation.

His first term saw many ambitious public works projects started but the other side of this positive coin was the negative gift of government contracts to cronies who inflated prices to the detriment of the public purse. He oversaw the Philippines founding membership of the Association of Southeast Asian Nations (ASEAN) in 1967 but behind the positive veneer of government PR Marcos was frantically seeking financial aid from the U.S. In 1969 he set a precedent by becoming the first Filipino president to be reelected to power but the bright hope of the nations patience was wearing thin and his 2nd term in office was to prove a far more turbulent affair than the first.

The threat of Communism was ever present and when Marcos implemented an engineered martial law it fed fuel to the red threat and incidents of insurgency were on the increase. A climate of fear was kept in place until Marcos finally rescinded martial law in 1981 but by this time he had affectedly blunted any threat from the opposition so he called the first election since 1969 and was easily reelected as president in name but dictator in reality.

As the Marcos years in power grew so did his list of enemies and in February 1986 his disenchanted opponents organised a series of civil resistance demonstrations against the government. Momentum grew for the demonstrations with notable allies of Marcos jumping ship meaning Ferdinand was left with no choice so he cut a deal for safe passage out of the Philippines for his family and close associates in what is now known as the People Power Revolution.

He ended his days in Hawaii bitterly ruing what he believed to be a traitorous coup d'état with little thought of the years of plundering the nations resources and human rights abuses all committed under his tenure. His legacy includes the building of all the speciality hospitals and many new roads in the country and becoming self sufficient in rice and corn production before the end of the 1960's, but for all the good he did achieve it was dwarfed by the vast corruption that drained the nations coffers.

Ultimately he promised much but delivered little for the resources spent was not commensurate with the benefit the country received. He had a photographic memory and was able to memorise a 25 page speech after just one reading, he was also good for a one liner so here is my compilation of 22 of the best Ferdinand Marcos quotes

Then Vice President George H.W. Bush was diplomatic in his 1981 description: "We love your adherence to democratic principles and to democratic process, and we will not leave you in isolation"

The correspondent Eric Pace described him thus: "Marcos was as tough as he was debonair, and he came to rule the Philippines with an iron hand before popular unrest forced him to flee in 1986 after two decades in power"

The prime minister of Singapore Lee Kuan Yew was pragmatic in his appraisal: "The difference lies in the culture of the Filipino people. It is a soft, forgiving culture. Only in the Philippines could a leader like Ferdinand Marcos, who pillaged his country for over 20 years, still be considered for a national burial"

Former Senator Vicente Paterno contextualised the kleptocracy: "The amount of theft perpetrated by Marcos's regime was probably less than that by Suharto on Indonesia, but harmed our country more because the sums stolen by Marcos were sent out of the country, whereas Suharto's loot mostly were invested in Indonesia"

Ferdinand Marcos Jr. said of his fathers legacy: "God has taken this great man from our midst to a better place. Hopefully, friends and detractors alike will look beyond the man to see what he stood for - his vision, his compassion and his total love of country"

The Philippine economist Bernardo Villegas was sympathetic towards his reformation efforts: "It was a cultural misreading of the Philippines. His economic samurais became robber barons instead" 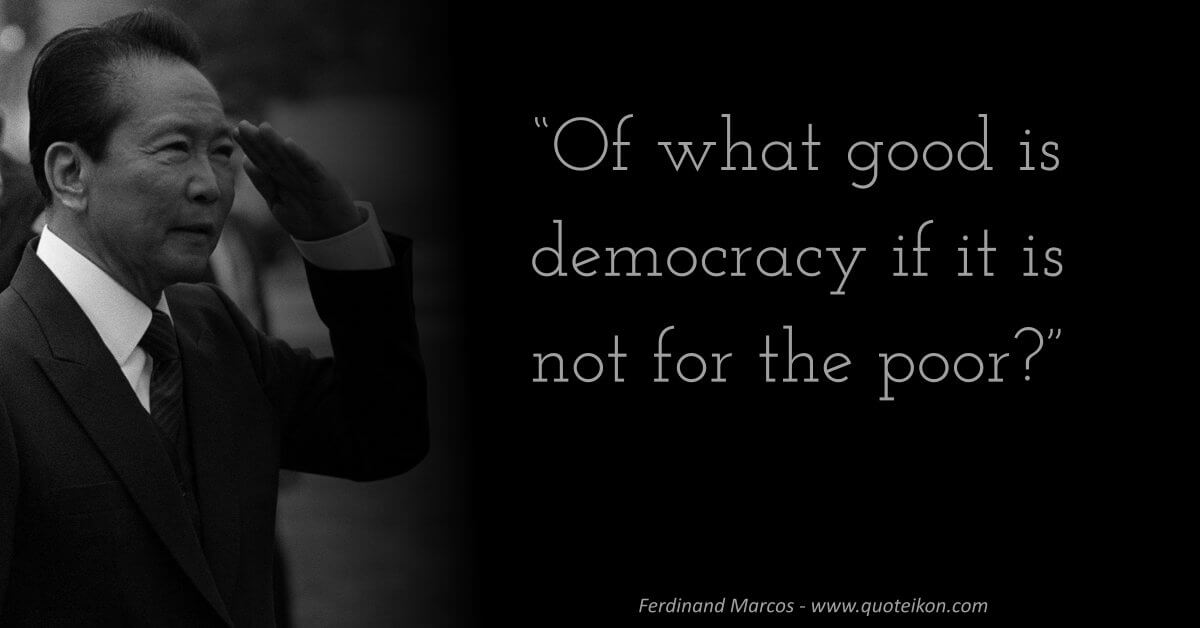