Ding Ling was a literary revelation whose writing reflected a time in the distant future where Chinese women could be independent from the traditional roles of housewives and live meaningful lives where they could display their inner passions without being emotionally crippled by conformity or physically crippled by foot binding.

Chinese literary circles of the late 1920's supported her work and to the Chinese people she was like a breath of fresh air as she wrote about the trials and tribulations of ordinary people who had ambition to succeed and dreams to fulfill. She created Chinese heroine's that people could relate to and aspired to emulate. In her own life she shunned tradition by choosing her own husband Hu Yepin who was an aspiring poet who decided to turn to politics as his literary successes could not match his wifes.

He joined the League of Left-Wing Writers and subsequently the Communist party and Ding Ling continued her writing but still supported her husband. In 1931 Hu Yepin was arrested by the British police at the Oriental Hotel in the British concession of Shanghai and handed over to the Nationalist Kuomintang government who promptly executed him and his colleagues in an incident that would later see them held up by the Communist Party of China as the Five Martyrs of the League of Left-Wing Writers.

This action drove Ding Ling into the political sphere and her writings started to support left wing teachings and the struggle of the people leading her to join the Communist party in 1932. Her significance to the Communist Party was she was the first well known Chinese author to join the Revolution.

Chairman Mao Zedong welcomed her as a literary heroine of the Chinese people initially but the party were not ready for her Chinese feminist literature and her relationship with the party became strained resulting in her being expelled from the party and jailed for her open criticisms.

Despite her rocky relationship with the Communist Party she still won the Stalin Prize for literature in 1951 for her novel about the land reform movement of the 1940s; "The Sun Shines Over Sanggan River". This was the first Chinese novel to win this prestigious prize.

Although schooled in Mandarin, Ding Ling was influenced by a broader pen as she garnered inspiration from Gustave Flaubert, Qu Qiubai, Shen Congwen and Hu Yepin.

As the cultural revolution drew to a close in China she was freed in 1975 and eventually her party membership was restored. Outspoken writers are always good for a quick quip, so this is my compilation of 11 of the best Ding Ling quotes

Chairman Mao Zedong welcomed her into the fold by simply saying: "Yesterday an intellectual lady - today a military general"

The author and academic Yi-tsi Mei Feuerwerker lavished deserved praise when she said: "Ding Ling has been one of the great survivors in modern Chinese literary history. Not only has she survived the dangers of war, exile, hard labor, and imprisonment by the governments of both right and left; she has also endured as a creative and practicing writer" 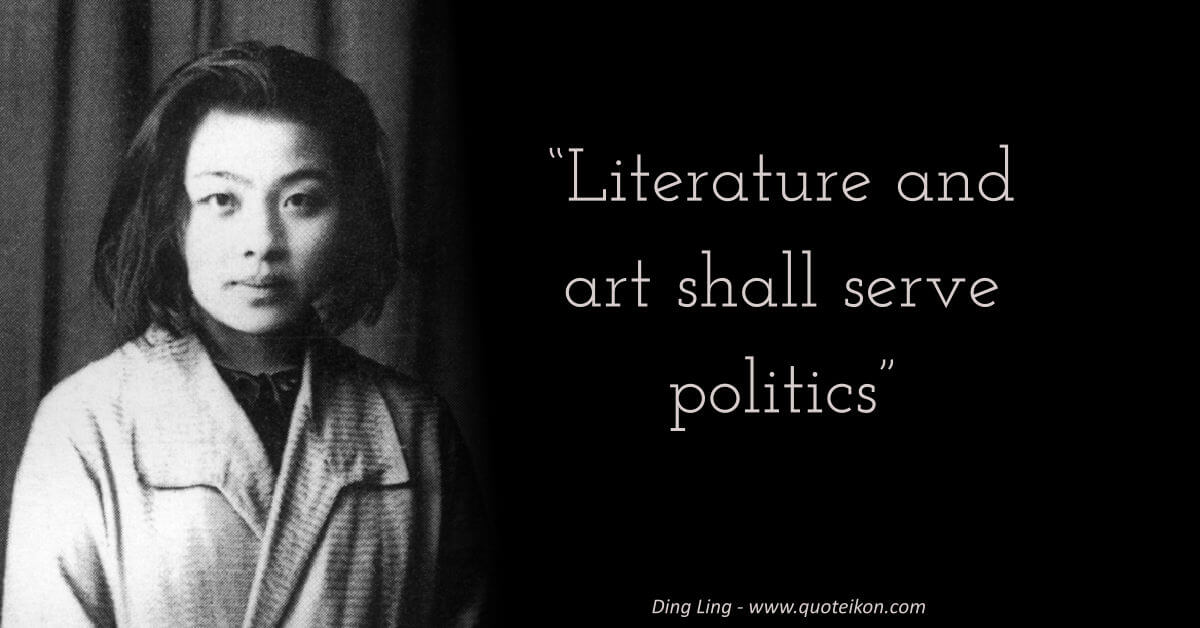