Bill Bojangles Robinson was the swift of foot dancer whose smile shone as bright as the lights of Broadway as he danced and acted his way to becoming the highest paid African American performer of the first half of the 20th century.

Although his primary legacy is for dance, Robinson was just as famous for his philanthropy as he gave most of his $2 million plus earnings away to friends, good causes and charity.

An example of Robinsons generosity was how he acted after Jessie Owens performed so heroically at the 1936 Olympics and came back to a heroes welcome with hundreds of invitations to events where Jessie would not get paid until Bill Bojangles Robinson stepped in and with the help of his manager they saw to it that Owens got proper contracts whereby he was able to get an income.

Robinson was also generous with his moves as he taught the likes of Shirley Temple, Eleanor Powell, Florence Mills, and Fred Astaire at different stages of their careers.

During the first decade of the twentieth century Robinson was honing his fleet footed skills in a double act with George W. Cooper that endured until 1914 when he Bill decided to go solo.

Bill Bojangles Robinson worked the Vaudeville scene up until the late 1920's when he made Broadway his new playground starting with the successful all-black revue Blackbirds in 1928.

Further Broadway hits followed as did a successful Hollywood career as he danced and acted his way through 4 movies with Shirley Temple where they became the first inter racial dance partners in the silver screens history.

Robinson was the primary mover in getting tap dance recognised with his smooth moves and infectious smile giving him an unmistakable stage presence that was just as delicate and crisp as his carefully choreographed dance routines.

He didn't just have fast feet as he was quite adroit with a quick quip or one liner, so this is my compilation of 11 of the best Bill Bojangles Robinson quotes.

Shirley Temple remembered Bill fondly: "We held hands and I learned to dance from Bill by listening, not looking at the feet. It was kind of a magic between us"

Shirley Temple always respected and looked up to him: "Bill Robinson treated me as an equal, which was very important to me. He didn't talk down to me, like to a little girl. And I liked people like that. And Bill Robinson was the best of all"

His biographer Jim Haskins made this observation: "That Bill traveled, at least professionally, in increasingly white circles was not so much a matter of choice as one of reality"

The artistic critic Marshall Stearns gave this assessment: "To his own people, Robinson became a modern John Henry, who instead of driving steel, laid down iron taps"

The actress Kimberly Elise summed him up thus: "He was exciting, he was different, he was charismatic"

The dancer Gregory Hines described some of his 'firsts': "He was one of the first to refuse to wear black-face on stage and ... he broke the 'two-color rule,' which kept black people on stage as duos. They couldn't go on stage in a solo performance" 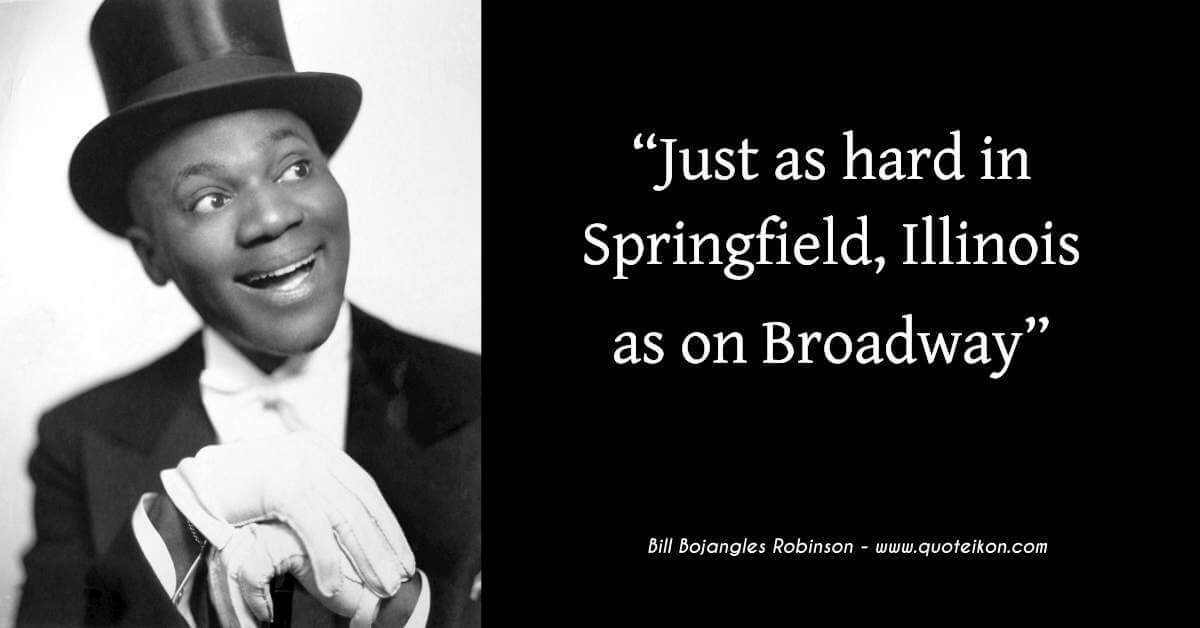