Benazir Bhutto hailed from an aristocratic land owning family that naturally progressed into the murky world of the Pakistani political system that has a penchant to deal with its enemies with the bullet rather than the ballot.

The Bhutto family had become a political dynasty that had woven itself into the very fabric of Pakistani political life as they grasped the challenge of bridging the gap between military dictatorship and parliamentary democracy whilst tiptoeing around the egg shells of powerful religious influence.

The Bhutto's, much like the Kennedy clan in America, have paid the heavy price of blood to achieve their political ambitions. Benazir's father was in 1967 the founder of the Pakistan Peoples Party that saw him rise to power in a free election only for the intervention of a military coup d'état that saw him ousted, imprisoned and ultimately executed in April 1979. Benazir's two brothers also met unpleasant endings when Shahnawaz died by poisoning in 1985 and Murtaza was shot dead in Karachi in 1996.

Up until the late 1970's Benazir Bhutto had led an idyllic life where she was afforded the best education gaining degrees at Harvard and Oxford as she enjoyed the trappings of the western world free from the cultural subjugation she would have endured back in Pakistan. As her Oxford years were drawing to a close the direction of her life also changed course with the 1977 arrest and imprisonment of her father Zulfikar Ali Bhutto whom Benazir visited him many times in prison.

During these prison visits Zulfikar schooled his daughter in the art of Pakistani politics and with Benazir embittered at the injustice suffered by her father she was inspired to follow his advice to continue his work and fight for democracy in Pakistan.

Benazir along with her mother became the leaders of her fathers peoples party which brought them into the cross hairs of Gen. Mohammad Zia ul-Haq and his military regime who did not appreciate opposition so the Bhutto's had to endure many years of imprisonment or house arrest until Zia's death in a 1988 military plane crash.

With the military dictators demise elections were set and Benazir Bhutto, seizing the opportunity, was elected as the first female Prime minister of Pakistan and the first elected female leader of a Muslim majority country. She served from December 1988 until August 1990 when allegations of corruption in government arose, mostly involving her husband Zardari, and President Ghulam Ishaq Khan dismissed the Bhutto government citing the Eighth Amendment of the constitution as the reason.

The PPP lost the subsequent election and Bhutto became the leader of the opposition where she took up the mantle of attacking the incumbent governments policies and slowly won the support of the people back. She won the 1993 election to become the 13th Prime Minister of Pakistan, but this reign was also short lived as the accusations of corruption resurfaced and she was out of office by November 1996.

Bhutto then spent nine years in exile in Dubai avoiding what she termed as politically motivated charges against her, until a U.S. orchestrated amnesty in 2007 gave her the opportunity to return to Pakistan and again take up the fight of the PPP. On her return she survived an assassination attempt in October 2007 in Karachi when two suicide bombers killed a total of 149 innocent victims. In December she was not so lucky as a suicide bomber detonated his device within metres of Benazir Bhutto who was campaigning in Rawalpindi and she was assassinated most probably by the Islamic fundamentalists who despised her so much, just as she had so many times foresaw.

With the words of her father still looming large in her mind she returned for this third attempt to steer Pakistan towards the democracy she felt her beloved country deserved. She knew how high the risks of assassination were, she was fully aware that the anti-feminist conservatives and various other extremists including the military all had their vested interests to protect, yet Benazir Bhutto still chose to return and fulfill her destiny, whether it be by the ballot or the bullet she accepted her fate for the love of her country and it was a decision for which she paid the ultimate price in the same Rawalpindi park that was witness to the assassination to Pakistan's first Prime Minister Liaquat Ali Khan in October 1951.

She was an eloquent orator who could hold her own in debate or inspired speech, she was also good for a one liner so this is my compilation of 21 of the best Benazir Bhutto quotes.

The writer Ginny Dougary talked some home truths: "Bhutto represents everything the fundamentalists hate - a powerful, highly-educated woman operating in a man’s world"

The Iranian author Amir Taheri was quoted as saying: "The Islamists killed Benazir Bhutto as they killed her father. But they shouldn’t be allowed to kill Pakistan’s hopes for democracy"

Newspaper editor Zaffar Abbas gave this assessment: "If you asked an ordinary person what they achieved when Benazir Bhutto was in power, they would say at least she gave us a voice and she talked about us and our problems. That was her real achievement"

The author Mark Siegel shared this observation: "The U.S. came to understand that Bhutto was not a threat to stability but was instead the only possible way that we could guarantee stability and keep the presidency of Musharraf intact"

An Al Qaeda commander Mustafa Abu al-Yazid claimed responsibility for the assassination, stating that: "We terminated the most precious American asset which vowed to defeat the mujahideen"

A Pakistani official, Aamir Hassan recognised her leadership qualities: "Benazir Bhutto was well aware of the designs of her enemies after the Karsaz blast, but like a true leader she refused to back out of the promise she made to her father for the safety and security of the nation. Like father, like daughter"

The columnist Mohammad Taqi was brief, but to the point: "Pakistan’s first - and perhaps the only - modern leader" 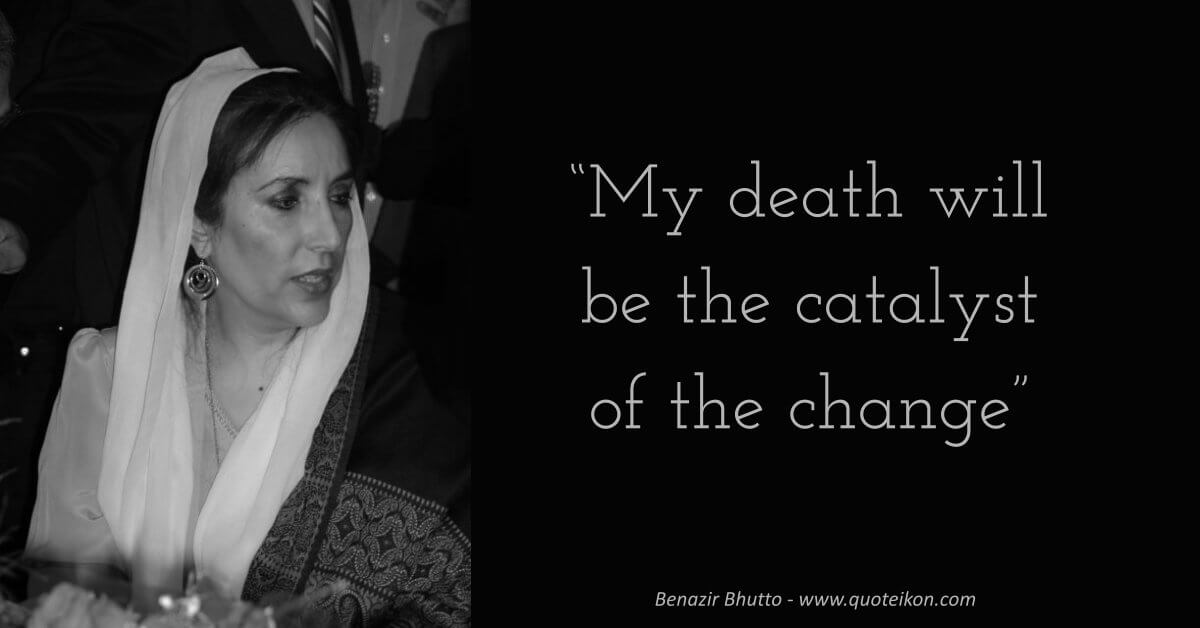