They broke the mold when they made the audacious footballer Zlatan Ibrahimovic with his technical prowess spanning every known adjective from sublime to outrageous, he has scored goals, scowled and won championships in most of the big leagues in Europe.

Zlatan learnt his football on the mean streets of Rosengård a district populated mostly by immigrants in the Swedish city of Malmo and after a rough childhood his footballing skills earned him his first professional contract with Malmo FF. From there Zlatan was transferred to AFC Ajax of Amsterdam where he helped them to two Eredivisie titles.

It was when he moved to Italy that the boy from Rosengård really came of age as a successful footballer as every club he played for won the Serie A league title. Ibrahimovic readily gives credit to his managers Fabio Capello who coached him at Juventus and Jose Mourinho at Inter Milan and he states they both had the most influence on his career.

Indeed Ibrahimovic was quoted as saying about Jose Mourinho that he; "turned me from a cat into a lion, dragged things out of me at Inter that no one had done before". Zlatan was still ambitious and he harboured a dream of playing for Barcelona and when the Barca manager Pep Guardiola came knocking he had no hesitation in signing for the Catalan giants.

Again he helped deliver trophies in his first season with the La Liga title in the 2009-2010 season. However his dream move to Barcelona ended in animosity as he fell out with coach Guardiola and he was transferred back to Italy where he promptly helped AC Milan to the 2010-2011 Serie A title.

After his latest Italian sojourn he moved to France where he was part of the successful Paris St Germain team that won 3 consecutive league titles. His next move was to the English league when Manchester United swooped in to sign him. After a successful stint in England Zlatan went to ply his trade across the Atlantic for LA Galaxy in the MLS.

Every team Zlatan played for he scored on his debut and for Barcelona he is the only player to score in their first 5 league matches. He is Swedens all time top goal scorer and he has to his credit 13 championship trophies in four different domestic leagues.

There are rarely dull moments around precocious talents like Zlatan and his one liners were always memorable, so here is my compilation of 20 of the best Zlatan Ibrahimovic quotes.

The French footballer Jean-Pierre Papin was impressed to say: "We haven't had a goalscorer like him in France for a long time. He is on a different planet to anyone else"

José Mourinho said this during his spell at Inter: "Ibrahimović? He's a great player, but no player is bigger than a club. Ibra at Inter has become an important player, but some clubs are bigger than players and coaches"

The football manager Fabio Capello made this comparison: "No one has the power of Zlatan Ibrahimović. He and Marco van Basten are identical in elegance"

The Brazilian footballer Leonardo described him thus: "He is a unique soccer player. If we talk about the best in the world, there are Messi and Ronaldo, but they are not prime tips. The best striker in the world is Zlatan" 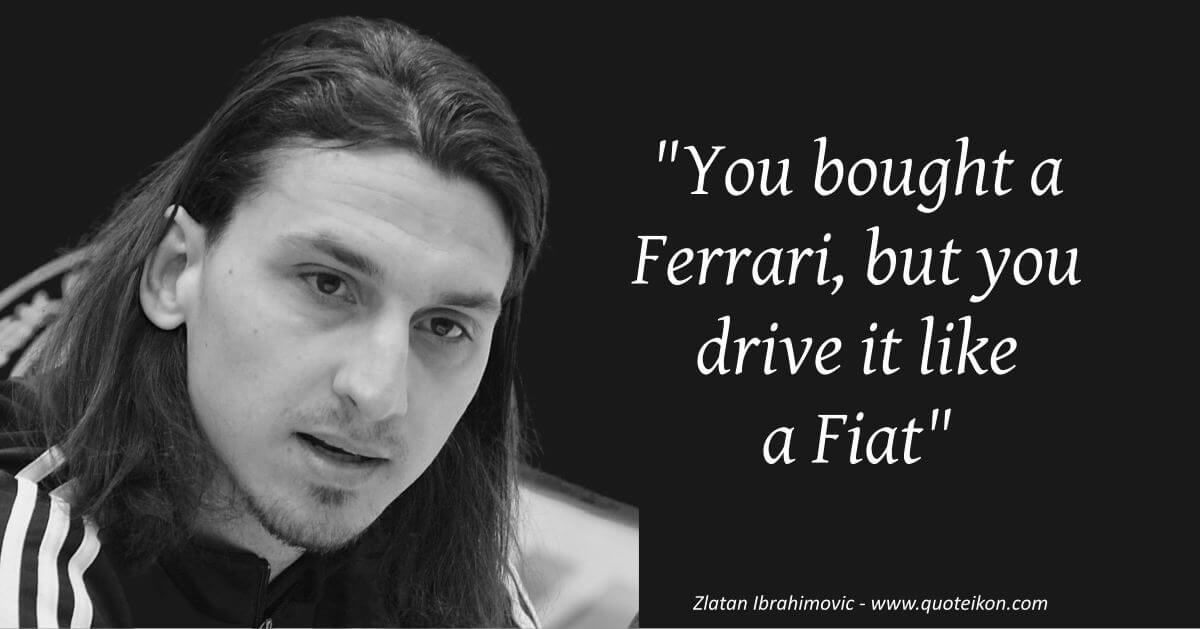