Yasunari Kawabata was a thoughtful writer who with an imagination as wide as a Tokyo sunrise and a youthful exuberance for literary change set about to break free the pens chained to the old school of Japanese naturalism and open up new ideas for literature in 1920's Japan.

Kawabata was a founder member of the literary journal The Artistic Age that made its debut in 1924 and along with other young writers of that era they encouraged writers to explore new forms of expressionism in the form of perception that more pertinently is key to opening the mind to allow new sensations to be experienced.

They were the avant garde of Japanese literature and as Kawabata put pen to paper so his literary prowess began to slowly build. Yasunari often spoke about isolation being good for the soul and that self reflection can build ideas of beauty, however Kawabata was also prone to bouts of depression so shutting himself off from the world could have been a defensive strategy he subconsciously deployed.

It is easy to understand his defensive mindset when you consider all his close family died before he reached the age of 15. This sense of loss and of isolation brought him to the point in WWII where he suggested that WWII was one of the greatest influences on his work.

The death and the loss was evident in most families in 1940's Japan but the ironic thing was that his style of writing never really changed as it would be expected to do through a traumatic life changing war. Indeed it was almost as if he could relate to the family losses because he too had experienced complete family loss as a young boy and it haunted him throughout his life.

The 1950's decade was a time where Kawabata's writing really blossomed and came of age, this was a period when his writing hit its prime and his passion for Japanese literature pushed him to promote translations of the best of his peers work for worldwide consumption.

If you are that good for 50 years something has to give and in recognition of his amazing contribution to literature Yasunari Kawabata was awarded the 1968 Nobel Prize for Literature. He was one of epic Japanese writers of the 20th century who also liked a good one liner, so this is my compilation of 15 of the best Yasunari Kawabata quotes.

The author Kenzaburō Ōe gave this assessment: "Even as a twentieth-century writer Kawabata depicts his state of mind in terms of the poems written by medieval Zen monks. Most of these poems are concerned with the linguistic impossibility of telling truth. According to such poems words are confined within their closed shells"

John M. Lee writing in The New York Times described Kawabata's bemusement at his award: "His spare prose depicts Japanese emotions often impossible to translate into English, and he expressed perplexity over having won the Nobel Prize, saying that Japanese literature and tradition were so difficult for Westerners to understand" 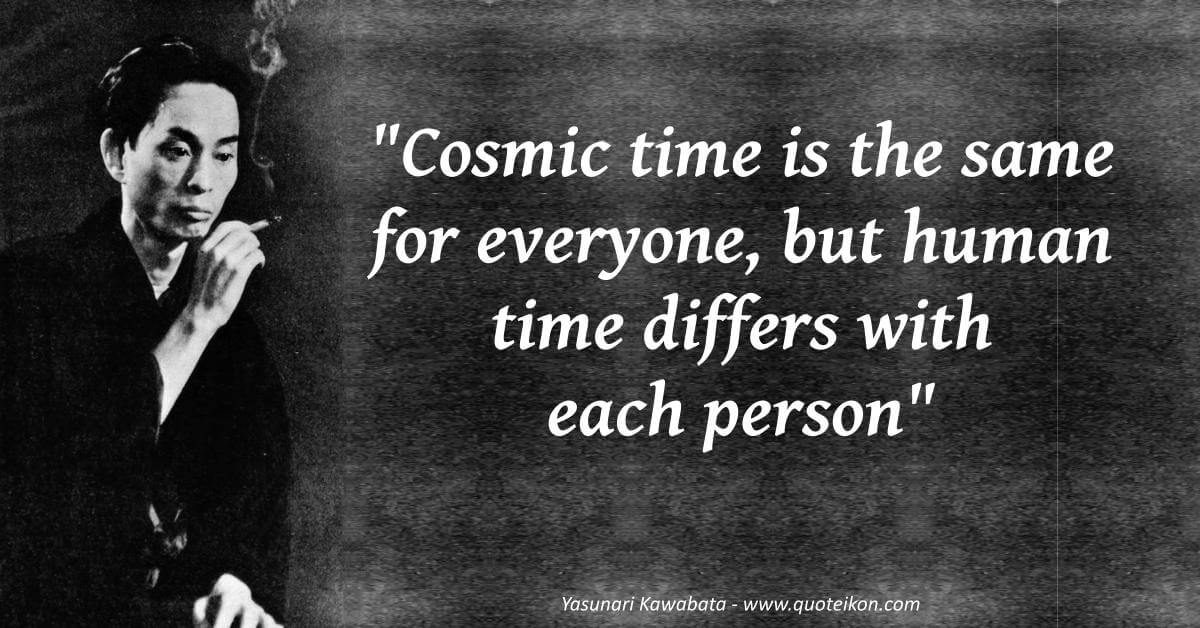