William Monroe Trotter was a lifetime activist in the American civil rights movement, he used his investments in real estate to fund the Boston Guardian newspaper which he founded in 1901 and used it to actively protest all forms of racial discrimination.

Trotter's antagonistic tone gained as many enemies as it did admirers and he often found himself criticised in the press for his unyielding stance on civil rights issues. He even had the audacity to belligerently berate President Woodrow Wilson during a White House meeting that left the president taken aback by his passionate tone.

William Monroe was a man born ahead of his time as many of his ideas were shunned as too radical by his peers and fellow social activists such as W.E.B. Du Bois and Booker T. Washington, however these same ideas were later taken up by the civil rights movement as it progressed through the 1950's and 1960's.

As an articulate man who never minced his words he was known for many good one liners, so this is my list of 16 of the best William Monroe Trotter quotes.

The activist Kelley Miller paid the great man this tribute: "Monroe Trotter died a martyr to his race. I have known every agitator for racial rights who has stood out conspicuously for the past 40 years. Trotter stands out as the unrivalled and unmatched leader of his generation. He was not a radical but a courageous agitator for Constitutional and guaranteed rights. He sought no change in existing law nor the overthrow of existing order. His mission was not to destroy but to fulfill"

Woodrow Wilson in an effort to deflect the issues of his infamous meeting with Trotter said: "Let us leave politics out of it. If the colored people made a mistake voting for me, they ought to correct it and vote against me if they think so. I don't want politics brought into it at all"

Woodrow Wilson went on to famously say: "It takes the world generations to outlive all its prejudices"

In a tense White House meeting Woodrow Wilson called Monroe Trotter: "The only American citizen that has ever come into this office who has talked to me in a tone with a background of passion that was evident. ... You have spoiled the whole cause for which you came"

Woodrow Wilson later regretted his emotional outburst: "Never raise an incident into an issue. When the negro delegate threatened me. I was a damn fool to lose my temper and to point to the door"

The historian Lerone Bennett described him thus: "In the end, he was a dialogue that History carried on with itself"

The activist W.E.B. Du Bois gave this assessment: "I did not wholly agree with the Guardian, and indeed only a few Negroes did, but nearly all read it and were influenced by it" 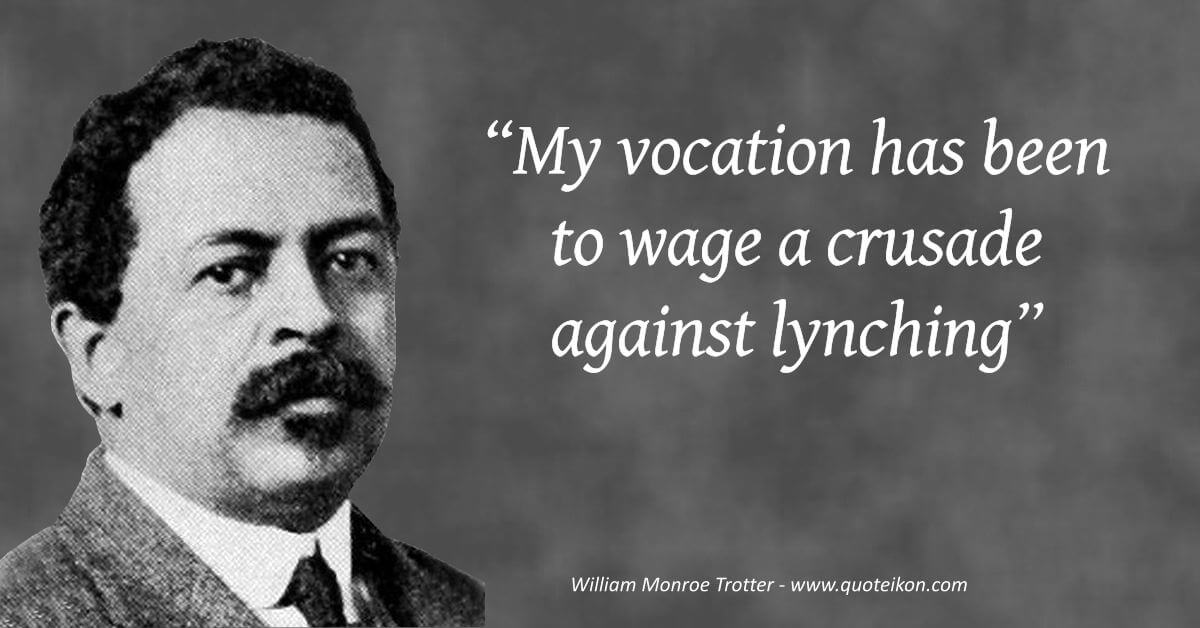