He was a soldier, a warrior and a general whose military brilliance unified Japan under his shogunate. His name was Tokugawa Ieyasu, the legendary leader who left the turbulent Sengoku period in his wake and introduced the Edo era that has shaped Japanese culture and lifestyle into what it is today.

The Japanese feudal period, also known as the Sengoku period that started in 1467 with the Omin War, would endure through three separate centuries of violent turmoil with local warlords, or daimyo as they were known, all vying for supremacy.

This was a blood-thirsty period in Japanese history that was compounded by the weak government of the Ashikaga shogunate. The Shogun Ashikaga Takauji dismantled the centralised government that had been set up by the previous administration under the Kamakura shogunate and he relied heavily on the loyalty of local warlords or daimyō.

There was little consistency in Ashikaga government policy as the daimyō tended to do as they pleased which led to chaos that created feuds and bred violence. The imperial court was also toothless and relied upon the shogunate who were giving military responsibilities to the daimyō which saw all these local warlords competing with each other and going to war amongst themselves.

Japan needed a change of direction as it was crying out for a strong leader to unite the country and this leader was to come from the most unlikeliest of backgrounds in the form of a minor warlords son called Tokugawa Ieyasu. Matsudaira Takechiyo was his birth name and he would change his name on many occasions depending on the clan allegiance he was loyal to.

The path to power for Tokugawa would be a long and arduous test of his cunning, resilience and tactical nous on both the battle field and in the political arena. As a young boy he would get a baptism of fire into the warring world that was Japan of his day.

It was a custom to use children as hostage guarantees in feudal Japan. He was just a five year old boy when the young Tokogawa succumbed to this fate and became a bargaining chip in a game of ever reshuffling alliances.

Tokogawa's father, Matsudaira Hirotada, was being attacked by the powerful Oda clan and he sought assistance from another powerful clan called the Imagawa. The Imagawa agreed on the condition that Hirotada send his son to their Sunpu castle base as a hostage. The Oda clan heard of this arrangement and kidnapped the boy when he was en-route to Sunpu.

Oda Nobuhide sent a message to Hirotada saying he would kill his son if he did not break off his alliance with the Imagawa. His father made the decision to sacrifice his son and keep the alliance. Fortunately for Tokogawa the Oda relented and let the boy live.

Three years passed by which time Tokogawa's father had been murdered and Nobuhide was also deceased having succumbed to a short illness. Nobuhide had chosen his second eldest son Oda Nobunaga as his successor and Nobunaga would go on to become one of the unifying forces of Japan. Before that could be achieved there was a small matter of the Imagawa clan laying siege to the castle where Ieyasu was being held that had to be dealt with.

The Imagawa demanded the release of Tokogawa Ieyasu and Nobunaga agreed so the boy was released and taken to Sunpu castle where he would remain until he was 15 years of age. There were many positive aspects to Ieyasu being a hostage as he actually benefitted from it by receiving a good education during his formative years.

Once he came of age he entered the feudal system and spent six decades in a successful military career. Ieyasu first whet his battle appetite at the Siege of Terabe in 1558 and although numerically disadvantaged his tactical awareness saved the day for his troops. He had a militaristic genius that would prove an invaluable asset in many successful campaigns that battle hardened him for what was to come.

His finest hour would come in 1600 at the Battle of Sekigahara where his army emerged victorious making him the most powerful man in Japan. Before that, a great many challenges lay ahead for Tokogawa Ieyasu to successfully traverse the path from soldier to shogun. The political landscape and alliances would change many times during his arduous ascent to power.

In 1560 the leader of the Imagawa clan, Imagawa Yoshimoto was killed at the Battle of Okehazama by the forces of Oda Nobunaga whilst Tokogawa Ieyasu was successfully laying siege to the Oda stronghold of Marune.

With Yoshimoto dead, Ieyasu took advantage of the situation to switch sides and form an alliance with Nobunaga. At the same time he went back to his ancestral home of Mikawa where he became the head of the Matsudaira clan. His plan, which was both lucrative and successful, was to gain lands in Mikawi and beyond for his clan whilst supporting Nobunaga in battle when required.

The territories under his control were expanding. Ieyasu had fought many battles against many enemies including another powerful clan called the Takeda. The war with the Takeda lasted for ten years until in 1582 at the Battle of Tenmokuzan the forces of Tokogawa Ieyasu were victorious. In the fallout of defeat and in true samurai style, Takeda Katsuyori who had been a mortal enemy for a decade, committed harakiri to restore honour to his family name after being unceremoniously beaten.

1582 was an important year for another reason, the death of Oda Nobunaga. One of Nobunaga's generals, Akechi Mitsuhide, betrayed him in a coup d'état. Knowing Nobunaga's whereabouts, Mitsuhide took a unit of his men to assassinate his leader. Before his men had the chance to kill their former leader, Nobunaga committed harakiri rather than succumb to a death by a traitor

Nobunaga ruled over 20 provinces. Tokugawa Ieyasu saw this as an opportunity for rapid advancement so he quickly mobilised his army and first in their sights was the province of Kai which he promptly invaded and easily took control over.

Another powerful clan, the Hōjō whose leader was Hōjō Ujimasa, also had his eyes on the province of Kai. The Hōjō invaded Kai but no blood was spilled. Ieyasu negotiated a settlement where the Hōjō could take control of the Kazusa province whilst Tokugawa Ieyasu could keep Kai and take control of Shinano province. Both leaders were satisfied with this agreement.

Meanwhile the two most powerful daimyō in Japan, Toyotomi Hideyoshi and Shibata Katsuie, were going to war with each other. In 1583 at the Battle of Shizugatake Hideyoshi would emerge as victorious making him the most powerful man in Japan. This was a battle that Ieyasu observed cautiously deciding it was not the time to take sides, yet.

Hideyoshi was powerful, but there were more players still in the game harbouring their own ambitions. One such daimyō was the last surviving son of Oda Nobunaga, Oda Nobukatsu. In 1584 Ieyasu formed an alliance with Nobukatsu in a move that both outraged and threatened the powerful Hideyoshi.

This resulted in both sides locking horns in two inconclusive battles at Komaki and Nagakute. Hideyoshi negotiated a truce and promised to involve both leaders in future invasions planned for the islands of Shikoku and Kyūshū and eventually against Hōjō Ujimasa who ruled eight provinces.

The year was 1590 and the Hōjō Ujimasa were feeling the full force of the combined armies of Hideyoshi, Ieyasu and Nobukatsu. The stronghold castle at Odawara was under siege for six months and after it finally fell the Hōjō clan realised that any further resistance was futile, so their armies surrendered and their leaders committed harakiri.

As a reward Hideyoshi offered Ieyasu all eight former Hōjō provinces but there was a catch, Hideyoshi wanted in return all five provinces under the control of Tokugawa Ieyasu, including his home in Mikawa. Ieyasu agreed and moved all his armies and resources to Edo in Kantō (present day Tokyo).

Ieyasu acted fast to improve the economy and day to day living of his new found subjects. His ploy worked and the samurai warriors who previously served the Hōjō became loyal to Tokugawa Ieyasu and so bolstered his military capability.

In 1598 Hideyoshi died and with his son and heir only five years old responsibility was given to five regents, including Ieyasu, to rule the kingdom until the boy came of age. Tokugawa Ieyasu recognised the opportunity but knew the timing was not right. He concentrated on seeking out warlords who had despised Hideyoshi and formed secret alliances with them while waiting for the time to strike. In 1599 one of the five regents, Toshiie Maeda, died. This was the moment Ieyasu had been waiting for.

Tokugawa Ieyasu sent a message of intent when he attacked and took over Osaka Castle, a major landmark of great significance in Japan. The outraged regents rallied their armies and the daimyō's of the country began to take sides. This would be the battle for the ultimate control of Japan.

The scene was set. The field of battle would be Sekigahara and the date was 21st October 1600. Tokugawa Ieyasu commanded his eastern army of 75,000 but they were outnumbered by the forces of the western army who had 120,000 soldiers at their disposal, or so they thought. As the battle progressed through the day more and more army units defected to Ieyasu's side and this put the battle plans of the western army into disarray.

The western armies had been put to the sword. Its leaders either killed or executed. This hard earned victory was a turning point in Japanese history. The subsequent years saw Tokugawa Ieyasu consolidating his power and rendering vast swathes of land free from the fear of the violent daimyo.

In 1603 the emperor Go-Yōzei, who was symbolically important without holding the reins of power, gave Ieyasu the title of Shogun and the system of rule he put into place would become known as the Tokugawa shogunate and it went onto maintain power for the next three centuries.

He had the steel of a soldier, the spirit of a samurai, the strategy of a shogun and the stature of a statesman. Tokugawa Ieyasu established his name as one of the most significant figures in Japanese history and is remembered proudly as a unifying warrior, statesman and the first Tokugawa shogun that led to the dynasty of the Tokugawa shogunate.

As an eminent leader he was wise but fair, he was also good for a one liner so this is my compilation of 12 of the best Tokugawa Ieyasu quotes.

The eminent oriental historian Arthur Lindsay Sadler described him thus: "Tokugawa Ieyasu is unquestionably one of the greatest men the world has yet seen"

The scholar Gregory Bornmann talked of his legacy: "Tokugawa law ultimately contributed to the economic success of what was to become modern Japan" 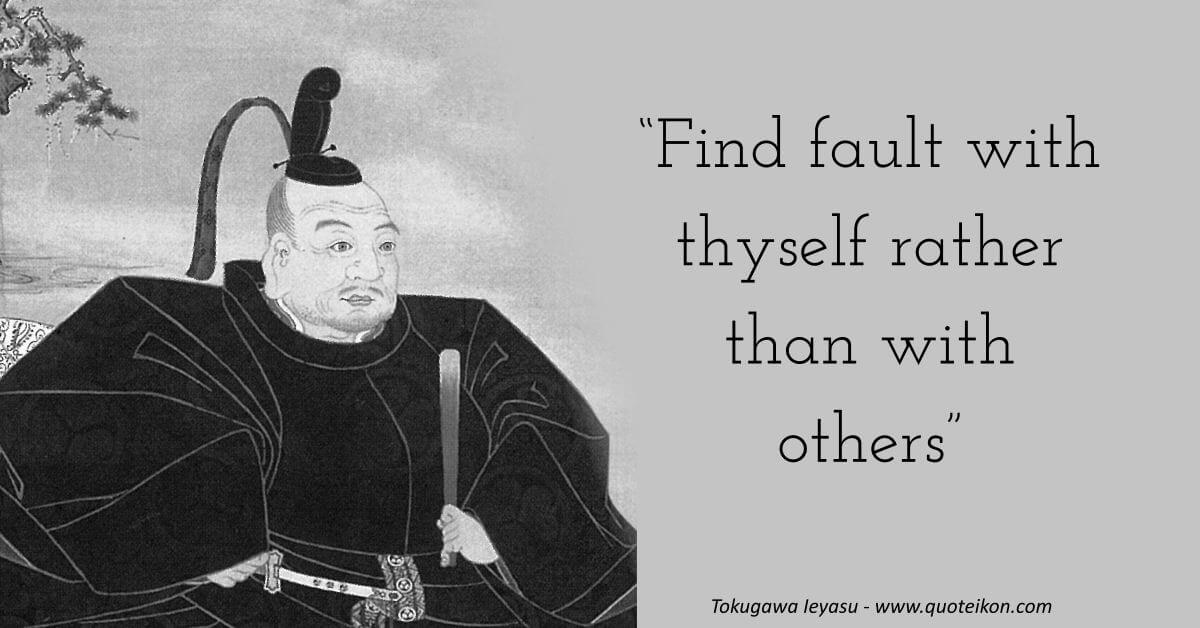