Tina Turner was the girl from a broken Nutbush, Tennessee home whose talent saw her rise and fall from the dizzy heights of rock and roll fame only for her to reinvent herself and reclaim the crown of The Queen of Rock 'n' Roll in a story of modern day musical legend.

The majority of artists who become famous and then fade away fall back on the memories of loyal fans to continue performing in an effort to keep the pay cheques rolling. Tina Turner was different, her fall from grace was mired in the worst aspects of rock and roll over indulgence with her partner and mentor Ike Turner losing the plot during a mid 1970's downturn in their popularity.

Having grown tired of the abuse she left penniless in a bid to rediscover herself and start again. She was used to working her way up the hard way, in the 1960's with Ike they had one of the best and most polished live acts on the circuit but still struggled to break into the big time.

In 1966 they had their big break with the Phil Spector inspired "River Deep, Mountain High" which initially flopped in the U.S. but was a huge success in Europe. This was the record that paved the way for her first success and although Ike taught Tina how to dress and move on stage she was the real star during their 10 years at the top.

From her split with Ike in 1976 her path back to success was long and arduous but ultimately worthwhile, in 1983 she had her first sense that she was on the right track with her version of the Al Green number "Let's Stay Together" rising high in the UK charts.

Tina's Capitol Records label could smell the money and they released her "Private Dancer" album which saw her career go back into an upward trajectory with the hits coming just as fast as the awards bestowed onto her talent. In between world sell out tours she released her autobiography "I Tina" and her 1993 biopic "What's Love Got to Do with It".

Turner's iconic look has also graced the silver screen where in 1975 she played the role of "The Acid Queen" in the rock opera "Tommy" and in 1985 she won the NAACP Image Award for Outstanding Actress in a Motion Picture for her role as "Aunty Entity" in "Mad Max Beyond Thunderdome".

In the music industry reinventing yourself is not an easy task, it takes a special talent to rise phoenix like from the flames and Tina Turner did exactly that to become the rock and roll legend that we all know and love. In amongst the headlines she generated she was good for a one liner also, so this is my compilation of 20 of the best Tina Turner quotes

Music producer Robert Krasnow described them thus: "Ike saw her as the ultimate woman, as a Venus, the perfect girl. It was a fantasy of his and she played to this image for him, or was a partner to it because she wanted the same things he did"

Ike Turner spoke of his influence when he said: "When I met her she was Anna Mae. I was the one who turned her into Tina Turner"

Phil Spector who produced her first hit recalled: "I always loved Tina. I never knew how great she was. She really is as great as Aretha is. I mean, in her own bag she is sensational, and Joplin and all that"

Mick Jagger recognised her talent early on when he was quoted as saying: "I was influenced by her. She’s one of the first women performers I worked with who has the same aggressive thing that I’ve got" 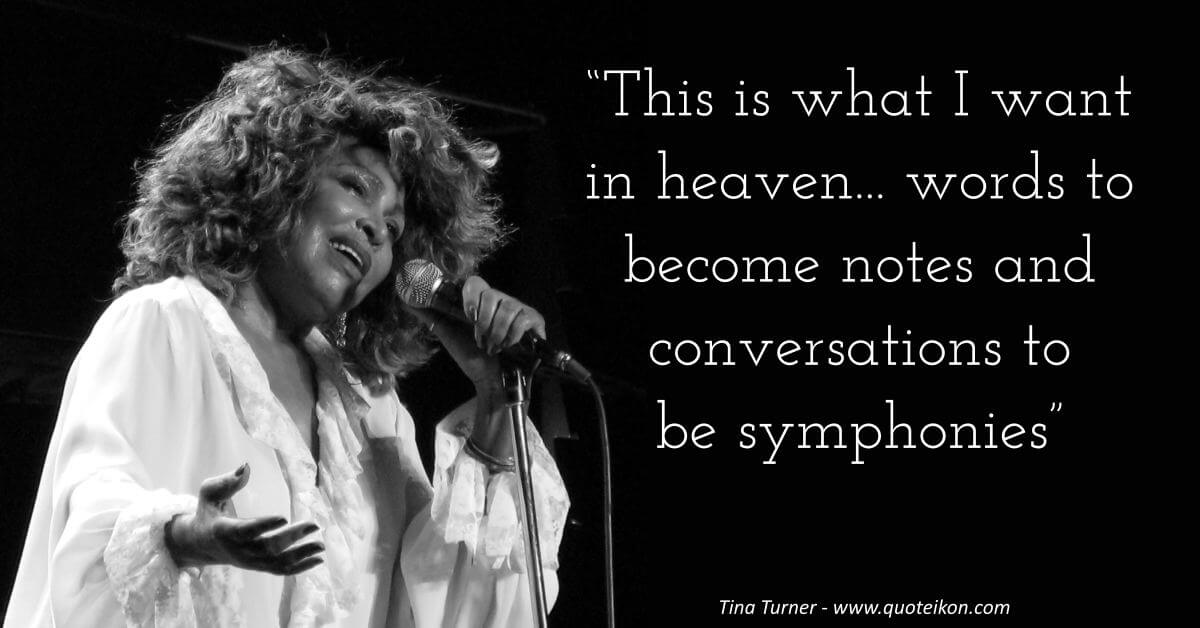