Like him or loathe him Sukarno has cemented his place in the annals Indonesian history as the leader who turned the dream of Indonesian freedom into reality by planning, fighting and scheming his way through a quarter of a century of struggle to achieve his ambition of liberty and independence for his beloved people.

Inspired by his burning ambition for independence Sukarno formed the Indonesian Nationalist party in the mid 1920's and by the end of the decade he had become such a thorn in the side of the Dutch colonists that they arrested him for his nationalistic activities. Sukarno who was already an articulate orator was given a platform during his trial that he took full advantage of and delivered thunderous speeches about the vile evils of colonialism.

The eloquence of his message brought him international recognition and condemnation upon the Dutch government who quickly released him after giving him a four year sentence. The Indonesian people had found a new hero to look up to and Sukarno grew in prominence and influence to the frustration of the Dutch who decided to re-arrest him and exile him without trial to the island of Flores where he remained for 8 years until the Japanese invaded during WWII and released him.

Sukarno had an uneasy relationship with the Japanese, they needed him to control the people and supply food and labour whilst he wanted to use the Japanese to attain the country's independence he so desperately sought. After WWII Sukarno moved quickly to announce the new Independent Indonesian Republic citing in a speech the 5 principles of government: nationalism, internationalism, democracy, social justice and belief in God.

The Dutch came back to reinstate their control on their former colony so the Sukarno nationalists built an army using weapons left behind by the Japanese and fought a 4 year guerilla war from their base in the jungle. He also battled with the communists and Sukarno was famously quoted as saying on a radio speech; “Choose Communism or choose me,” the people chose Sukarno and the communist threat was quelled.

In the post WWII cold war climate this brought praise from the American's who threatened to cut off the Marshall Plan aid to the Dutch and in 1949 the Dutch finally ceded control and Indonesia was finally free from colonial rule. Sukarno was officially the first president of Indonesia and he remained in office until his 1967 fall from grace when the army took control of the country.

His years in power were marred by an economic slump brought on by his own miscalculations and his dream of Indonesian expansionism across S.E Asia. His speeches were still something to be in awe of and his quick mind delivered some of the finest one liners found by any statesman in Asian politics, so without further ado, this is my compilation of 20 of the best Sukarno quotes.

The author Pramoedya Ananta Toer was impressed to say: "Sukarno was the only Asian leader of the modern era able to unify people of such differing ethnic, cultural and religious backgrounds without shedding a drop of blood"

The scholar Donald Greenlees gave this assessment of the 1975 U.S. release of documents pertaining to the consideration to assassinate Sukarno: "Sukarno was a divisive figure. He had enemies at home. But it remains unclear whether the assassination attempts were simply coincidence, whether people cultivated by the CIA acted alone, or whether some in the CIA were entrepreneurial"

Professor Robert Cribb made this observation on the CIA plot against Sukarno: "What we are seeing is a little bit more evidence that the CIA was closer to planning an assassination. There doesn't seem to be evidence of a definite plot but there is serious discussion of an assassination" 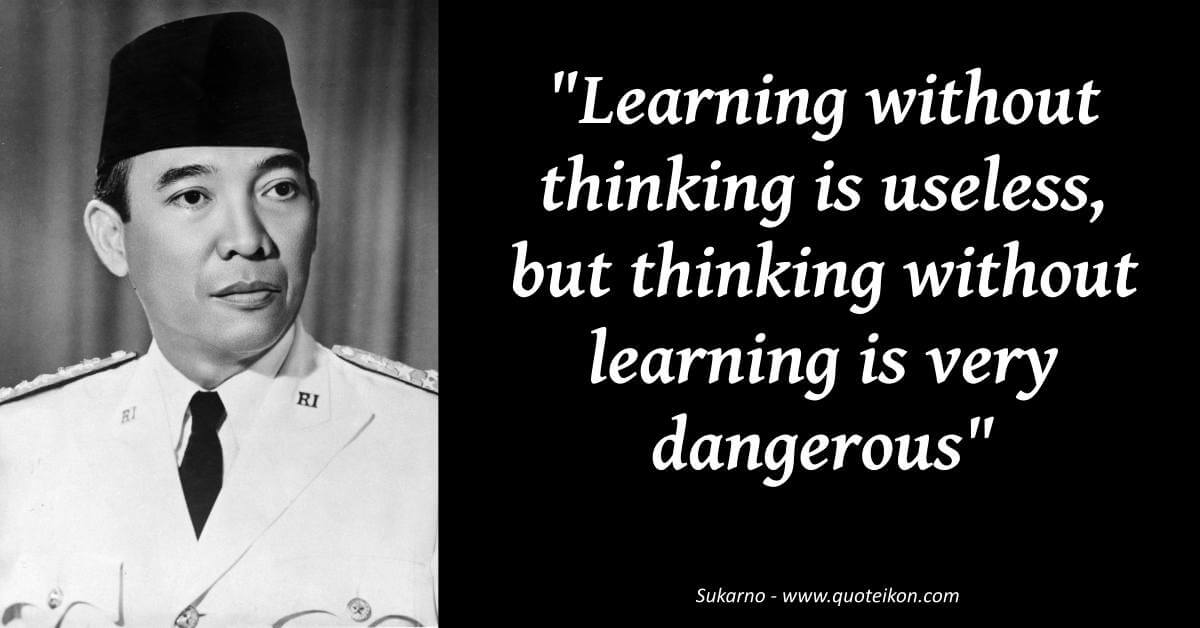