The name and fate of Sirhan Sirhan has since 5th June 1968 been associated with the assassination of Robert F. Kennedy in the Ambassador Hotel in Los Angeles. The fact that he discharged his gun on that fateful night has never been in question, however there is evidence that casts doubt on whether the bullets he fired actually killed RFK.

Finding a motive for why he might want to commit such a crime was not challenging as Sirhan often spoke of the injustices heaped upon Palestine by the Israeli's. U.S. based pro-Palestinian activist Mohammed Taki Mehdi was quoted as saying of him; "Sirhan was defending himself against those 50 Phantom jets Kennedy was sending to Israel", and he even harped on about the middle east situation during his trial.

He was sentenced to death but when California abolished the death penalty in 1972 his sentence was commuted to life with the possibility of parole every 5 years. Parole hearings concentrate on the crime and sentence served and cannot be used to question the original trial verdict.

During his 15th parole hearing in 2016 Sirhan had an unlikely ally on his side when Paul Schrade stood up to give a victim impact statement, Schrade was one of 5 other victims who were all shot but later recovered. Schrade was also a close friend and aide to RFK and in his testimony he supplied strong supporting evidence that Sirhan could not have fired the gun that killed RFK (see quotes in below section).

Robert Kennedy Jr the son of RFK also supports a new investigation as he cited new evidence that requires judicial review. The argument that Sirhan did not shoot the bullets that killed Robert F. Kennedy is very strong, evidence suggests the presence of a second shooter, however this evidence remains in the realm of conspiracy while the authorities refuse to acknowledge it, afterall Sirhan was standing in front of RFK when he fired but the fatal shots that killed the senator came from behind the presidential candidate

The term 'Patsy' seems a fitting adjective for Sirhan whose statements about the crime have flip flopped over the years, meaning, if he was a 'patsy' whoever chose him did a good job in selecting a victim for a crime he would not commit. Manipulated victim or not, this is my compilation of 15 of the best Sirhan Sirhan quotes

The RFK campaign aide Paul Schrade stated this at his parole hearing: "The truth is in the prosecution’s own records and the autopsy. It says Sirhan couldn’t have shot Robert Kennedy and didn’t. He was out of position"

Robert Kennedy Jr was also supportive of Sirhan as he was quoted as saying: "Paul and his team …strongly believe this new evidence is conclusive and requires a new investigation. I agree and support his request for a new investigation" 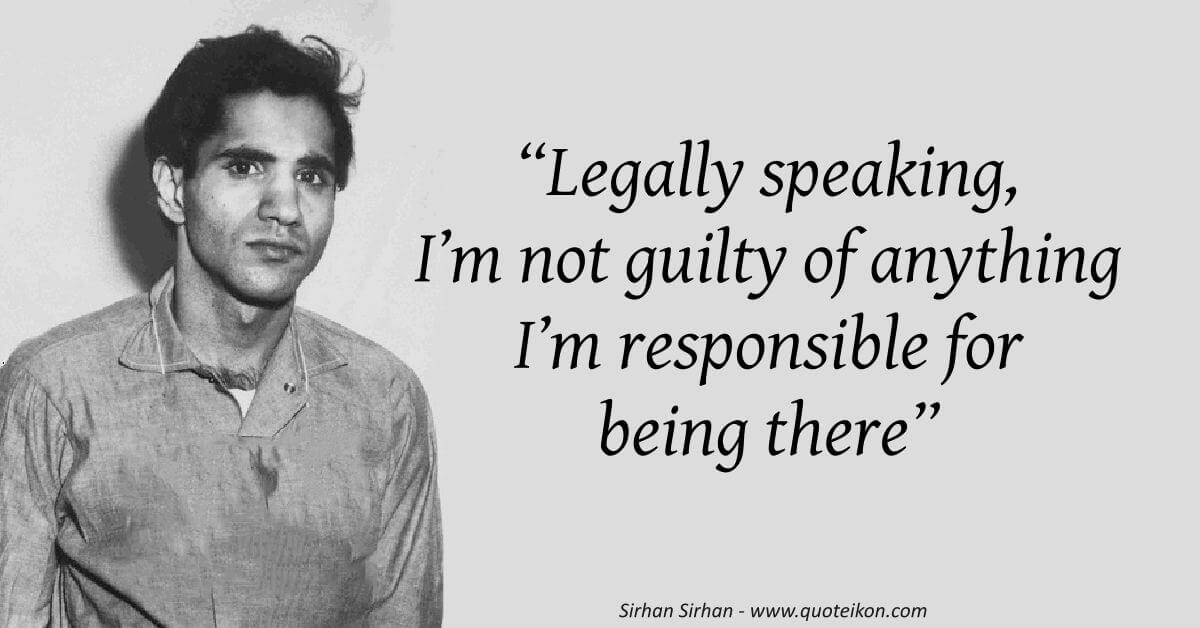