Since 1962 Neil Diamond has been rocking his way through the charts making him one of the few artists with hits in six different decades. His major successes began in the late sixties which became a song writing purple patch that set Neil on the road to super stardom.

Sweet Caroline, Cracklin Rosie and Song Sung Blue all sold millions and he was in big demand for his live performances. In 1976 he was signed to perform the opening of the Aladdin Hotel's new theatre and the shows ran through July to sell out crowds with icons of screen, stage and sports in attendance every night.

In 1980 Neil starred in the remake of the Al Jolson movie "The Jazz Singer", however it was panned by critics and never achieved the ground breaking heights of the 1927 original. The movie did highlight that Diamonds strengths were in singing and songwriting as three songs (Love On The Rocks, America and Hello Again) became top ten hits to mask over his lack of celluloid magnetism.

Being a super star sometimes has its drawbacks as he is famous for having the most expensive divorce settlement in rock and roll history which cost him $150 million to untie the nuptials from Marcia Murphey in 1994.

Diamond was still actively touring in 2018, however after being diagnosed with Parkinsons Disease he made the decision to retire from touring and subsequently cancelled the Australian and New Zealand legs of his tour. With him being at the top for so long it was fun research to find my list of 18 of the best Neil Diamond quotes

The critic Malina Saval described his live show: "Diamond fills entire concert venues with baby boomer vinyl enthusiasts clinging to their youth (and hairlines) and breathless, gushing, seventy-something women who still swoon at the sex symbol before them"

The guitarist Robbie Robertson was impressed to say: "The Tin Pan Alley songwriters in New York crafted brilliant songs for people to record, but they weren't performers, Neil Diamond bridged that world.... This guy is really good at what he does and comes from this tradition of songwriting"

The music critic Mikael Wood wrote of his longevity: "It’s the outsize character that’s allowed Diamond to maintain his place in the popular imagination" 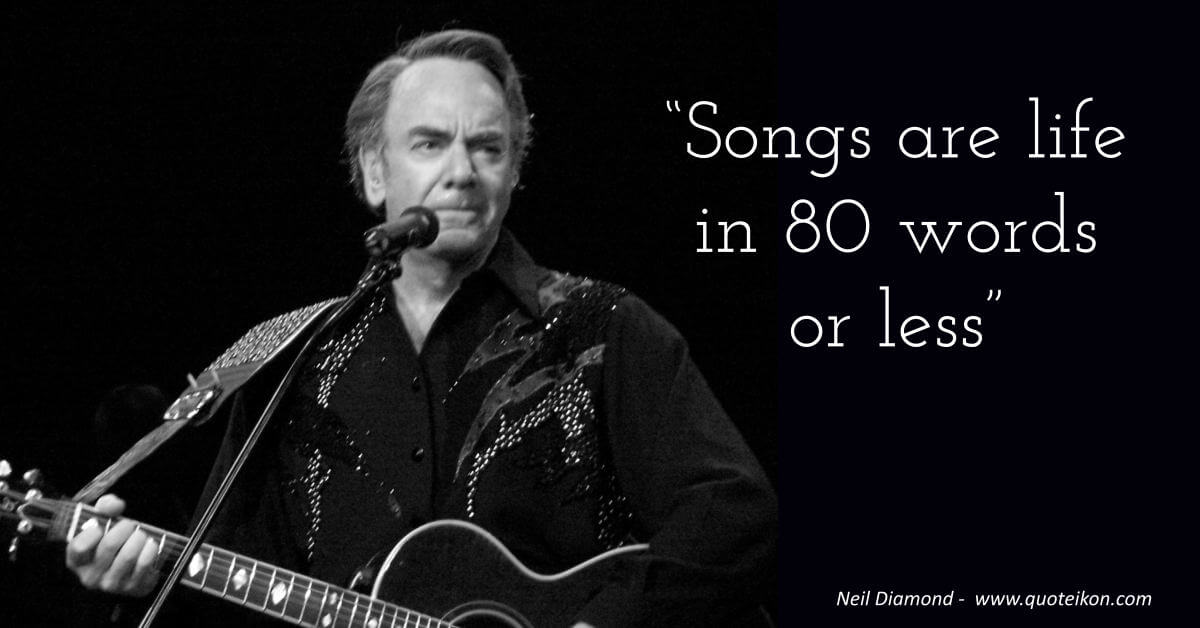