Nathan Bedford Forrest was the plantation owner who enlisted to the confederate army despite plantation owners being given exemption from joining the Souths military cause. Even with no military training he proved to be a valiant leader of men and a cunning strategist whose cavalry exploits were to draw respect from eminent military men from both sides of the north south divide.

He knew the pressure point to press to influence men leading to Forrests recruiting campaign where he was quoted as using the influential phrase; "Come on boys, if you want to have a heap of fun and kill some Yankees"

One of Forrests greatest victories of the civil war was at Brice's Cross Roads where he defeated union troops that outnumbered his men by 2 to 1 leading general William T. Sherman to be quoted as saying many comments about his enemy including: "that devil Forrest must be hunted down and killed if it costs ten thousand lives and bankrupts the federal treasury".

There were many more victories like this but there was also the controversial battle at Fort Pillow where his troops massacred the surrendering union soldiers as they infamously shouted "no quarter". Fort Pillow was to follow Forrest for the remainder of his life as a reminder of responsibilities even during the heat of battle during war time.

After the war Forrest offered his services to the then General In Chief of the U.S. army and former foe William T. Sherman when it looked likely there would be a war with Spain. The war did not materialise and Sherman thanked him for offering his services and was quoted as saying; "It would have been an honor to have served side by side with you".

As a passionate leader his words were given greater meaning because he was always prepared to stand side by side with his men in battle. So here is my compilation of 15 of the best Nathan Bedford Forrest quotes

General William T. Sherman recognised the threat he posed: "Follow Forrest to the death if it costs 10,000 lives and breaks the Treasury. There will never be peace in Tennessee till Forrest is dead"

The American historian Bruce Catton described his military tactics: "Forrest ... used his horsemen as a modern general would use motorized infantry. He liked horses because he liked fast movement, and his mounted men could get from here to there much faster than any infantry could" 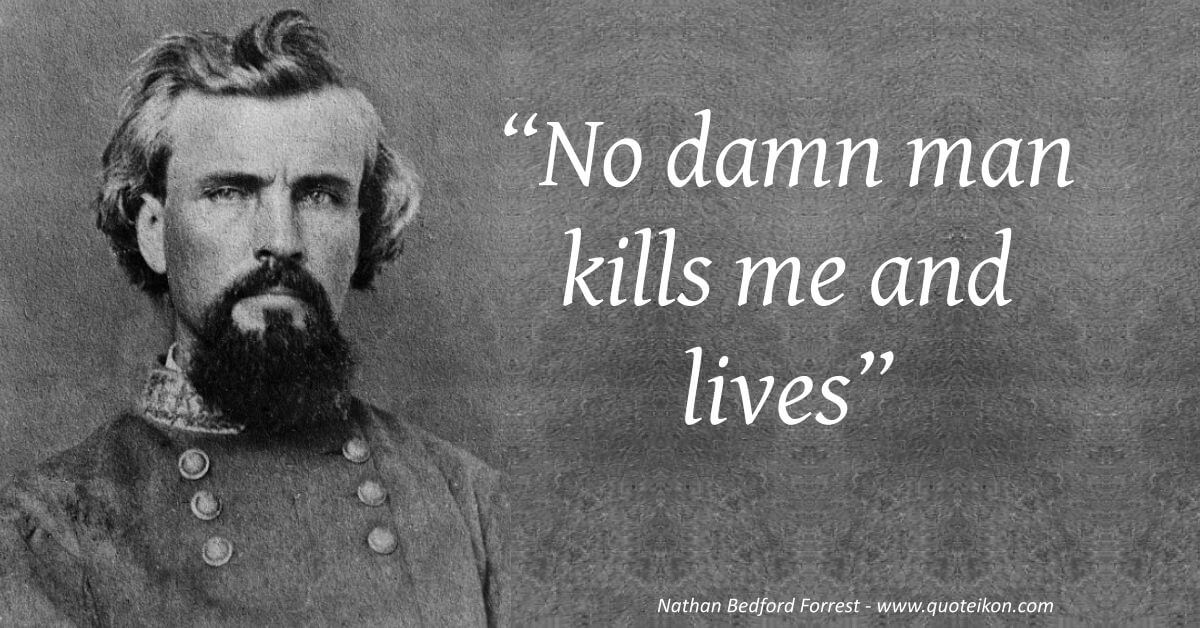