A lot has been made of Napoleon Hill's life before his success with Think and Grow Rich. Many people try to blacken his name with tales of shady business dealings and point to a number of arrest warrants made out in his name. A presumption of guilt is assumed despite the fact that all charges were dropped and he never stood for trial on any of the allegations levelled at his good name. Further to this, a number of newspaper retractions were printed that also seem to get conveniently overlooked during many of these online character assassinations.

The industrialist Andrew Carnegie guided Hill to interview the most successful business icons of the era to garner their secret success stories with the goal of compiling the information into a book. The result was the 1928 publication of The Law of Success that included a who's who list of forty-five of the most successful American business people of the 1920's.

In 1966 he founded the Napoleon Hill Foundation as a non-profit educational institution to give opportunities to individuals to achieve prosperity using his time honoured business philosophies utilising his 17 Principles of Success. The Napoleon Hill Foundation website makes a bold statement, which if true, solidifies Hill's legacy as the most successful self help guru the world has seen, the claim is as follows: "It is estimated that Napoleon Hill has helped more people become millionaires than anyone in history".

Hill virtually created the self-help industry of motivational reading with his best seller Think and Grow Rich. Many millions of people have been and continue to be inspired by his words of wisdom. His philosophy of perseverance to achieve success through a positive attitude have resulted in many peoples lives being transformed into meaningful and prosperous existences that has ensured that Hill's legacy will live long into the future

The critic Matt Novak described him thus: "Napoleon Hill is the most famous conman you’ve probably never heard of"

The author Jeffrey Gitomer offered a more positive critique: "He began working as a "mountain reporter" for small-town newspapers and went on to become America's most beloved motivational author"

The author Trevor G Blake commented on one of Hill's rules: "One of the governing rules he discovered was that whatever you set your heart on, you must be prepared to pay a price for, a rule contrary to my own experiences"

Dr. Robert C. Worstell positively enthused: "And that is what makes Hill's work so important. Only two other authors of his century presented self-help students with a certain plan to their life to put it on a chosen track. This is what places Hill with Wattles and Haanel in the triumverate of 20th century self-help classics. These all cover the same key points, and give the same answers to life's questions. Hill, in fact, credits Haanel with his success through a personal letter years before Think and Grow Rich was written"

J.B. Hill, his grandson, found enlightenment at a most unusual source: "I visited him at the hospital and asked him if I could get something for him to read. He said, Yes...Think and Grow Rich. I couldn't help myself. I spread my hands and asked him, "Why - I have read it only 7 times." Joe smiled, paused, and answered, "it helps to keep my mind straight." Now, Mr. Dudley is worth more than 200 million dollars. I am not. I realized then that there was more of Napoleon Hill looking out of his eyes at me than in me looking back. I hope my grandfather was there to witness"

The author Karen McCreadle put his success into historical perspective: "When Napoleon Hill put the finishing touches to Think and Grow Rich not even the father of positive thinking could have foreseen the impact his little book would have"

In a review of Think and Grow Rich, Arthur R Pell concluded: "Napoleon tells a story that inspires and gives every one a fighting chance in the quest for success"

The successful realtor Mo Anderson was laudatory: "Napoleon, every word of every chapter of your book played a role in altering my mindset in a positive way. I did think and I grew rich"

The journalist Oliver Burkeman thought there were better self-help gurus on the book stands: "Finding the wisdom in Hill's outlook on life is a challenging task"

The entrepreneur George Peintner drew inspiration: "From the point of being fired, to 40 years later living the great honor of having built an empire, your example of persistence-to keep on keeping on for 25 years of interviewing successful men and women in order to write Think and Grow Rich-has inspired me to continue to give and serve and think and succeed."

Jerry Reid felt transformed: "Without your book, my life would have been somewhat mundane, but due to you, I have assisted in planting 70 churches in Africa, a school for 300, and I am paying for law school for a young African girl" 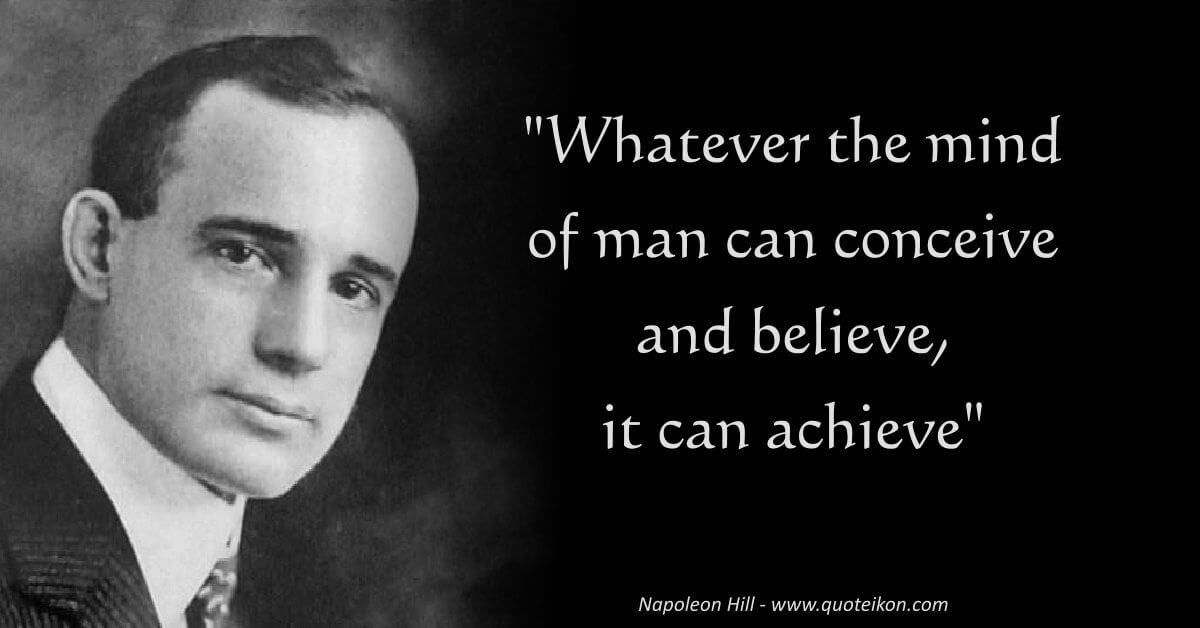