For a career spanning sixty years Mel Blanc was the voice that was heard across the globe as his over one thousand screen credits playing nearly 400 distinct characters placed him in the unique position of the most prolific actor in history.

Blanc, whose vocal chords were once compared to those of an opera singer, had the ability to change the pitch of his voice mid sentence to an extraordinary degree and it gave him such a diverse range that upon his death it took many different individual voice actors to replace him.

After 1960 he continued to work for Warner Brothers but he also voiced some of The Flintstone characters for Hanna-Barbera as well as working for MGM on Tom and Jerry. Blanc had the good fortune to enjoy both the Golden age of radio and the Golden age of Hollywood and such was his dynamic voice he was always in demand to perform.

Mel Blanc was also prolific in helping good causes and he especially enjoyed visiting children's wards in hospitals to cheer the kids up as he got into the character of Daffy Duck or Bugs Bunny or whoever they wanted to hear.

In 1961 he had a more serious hospital visit after he was involved in a head-on car crash that left him at deaths door in a coma with multiple fractures. After two weeks of one way talking to the comatose Blanc the surgeon tried a different approach by pursuing a conversation with Bugs Bunny instead, the surgeon was stunned to hear Mel reply in the voice of Bugs saying "Eh... just fine, Doc. How are you?", and the surgeon knew he was on the road to recovery when Blanc started talking in the character of Tweety Bird.

After his death in 1989 the inscription on his gravestone was his immortal line "That's All Folks" which was a fitting epitaph on the wonderful career of an exceptional voice actor. Forever known as the man with a thousand voices he was also good for a quick quip or two, so this is my compilation of 12 of the best Mel Blanc quotes

Jack Benny was impressed to say: "Everybody used his natural voice on the show - except one person. This person was a short, plump little person with a wispy mustache and big black eyes and a fantastic range of voices. They used to call Lon Chaney 'the man of a thousand faces'. Mel Blanc is the man of a thousand voices. He can play dialects - every kind - authentically. He can also play animals and birds"

Jack Benny later added: "There are only five real people in Hollywood. Everybody else is Mel Blanc"

The screenwriter Milt Josefsberg often tried to create impossible parts for him: "In one bit we wrote we had Jack ask a man something on a street, and in the stage directions we had written the instructions: 'Mel answers, using the voice of a Colored, Jewish Fag.' Damned if he didn't do it, but it never got on air"

The actress Joan Benny recognised his input into her father's career: "Mel Blanc in his many roles did look, I think, as one imagined. The fact that so much of the radio show could be duplicated was the major reason for dad's long and successful sojourn on TV"

Sometimes even movie critics like Leonard Maltin can be given unexpected surprises: "It is astounding to realize that Tweety Bird and Yosemite Sam are the same man!" 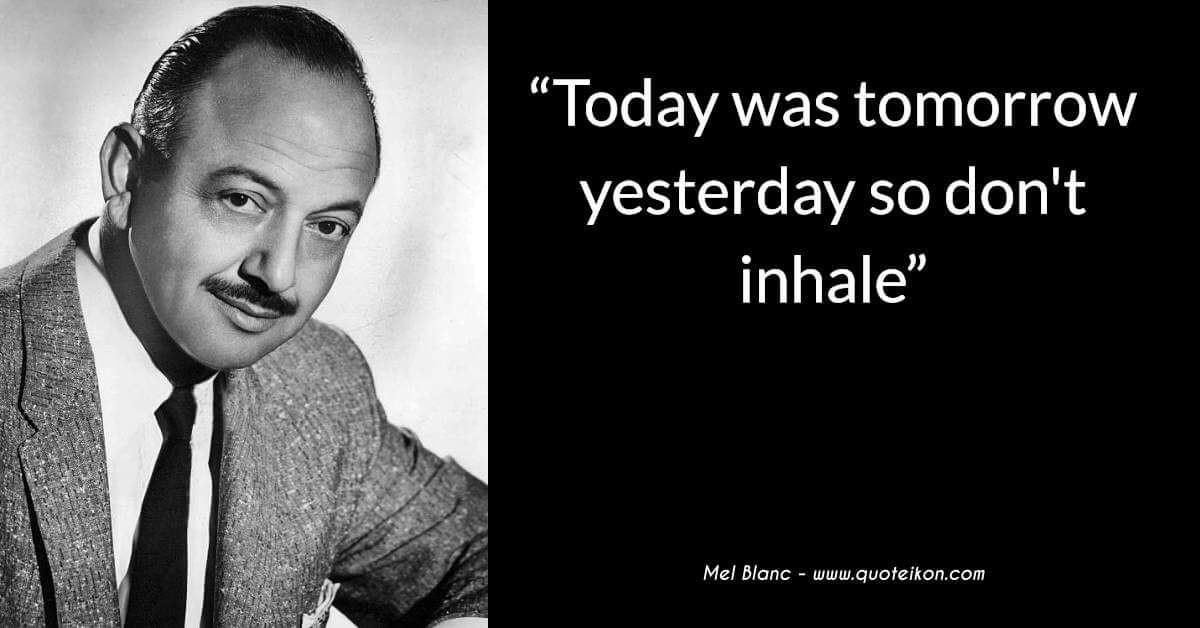