Luis Walter Alvarez was one of the most pre-eminent physicists of the 20th century who in a remarkable career of scientific curiosity solved a major problem on the WW2 Manhattan Project and correctly identified why the dinosaurs got wiped out to name but two.

His enquiring mind was always solving problems and in between winning the Nobel Prize for physics in 1968 he busied himself with projects like using muon tomography to generate three dimensional images of Egyptian pyramids in a bid to identify unknown chambers and his work on the GCA (ground-controlled approach) radar system.

In 1967 he carried out a scientific experiment to reveal unknown chambers in the pyramid of Chephren in Egypt by placing a cosmic ray detector inside a known chamber and recording the cosmic rays as they reached the detector revealing an x-ray type image using tomography that would show up any chambers. After studying 20% of the pyramid no new chambers were discovered and the experiment was stopped

One of his biggest challenges was creating a workable detonation device for a plutonium bomb as this had far greater obstacles to overcome than exploding a uranium bomb. Luis Walter Alvarez when comparing the detonating process of the two chemical elements was quoted as describing it like this: "Most people seem unaware that if separated U-235 is at hand, it's a trivial job to set off a nuclear explosion, whereas if only plutonium is available, making it explode is the most difficult technical job I know".

But succeed he did and implosion-type nuclear weapons were to be the deterrent of choice during the cold war. In 1977 he put his mind to solving a geological conundrum that had paleontologists confused and upon invitation from his geologist son he began to investigate what was called the K - T boundary which was an unusual grey colour of clay found all over the world at the exact same layer of time approximately 65 million years ago.

Straight away he suspected iridium which is only found at meteor impact sites and after some exhaustive testing he was convinced that 65 million years ago a massive meteor impacted the earth to cause a grey cloud which blocked out sunlight and caused the demise of the dinosaurs.

It's taken some years but this is now the most accepted view of the dinosaur extinction. Away from his laboratory he was good for a one liner also, so here is my compilation of 10 of the best Luis Walter Alvarez quotes

Acclaimed physicist Richard A. Muller paid tribute to his scientific prowess by saying: "He loved nothing more than doing something that everybody else thought impossible. His designs were clever, and usually exploited some little-known principle that everyone else had forgotten"

The astrophysicist George Greenstein gave an insight into his thinking when he said: "Alvarez could no more refrain from invention than he could from breathing. In the midst of an illness so severe as to incapacitate him for most of a summer, he amused himself by attempting to build a better detector of gallstones" 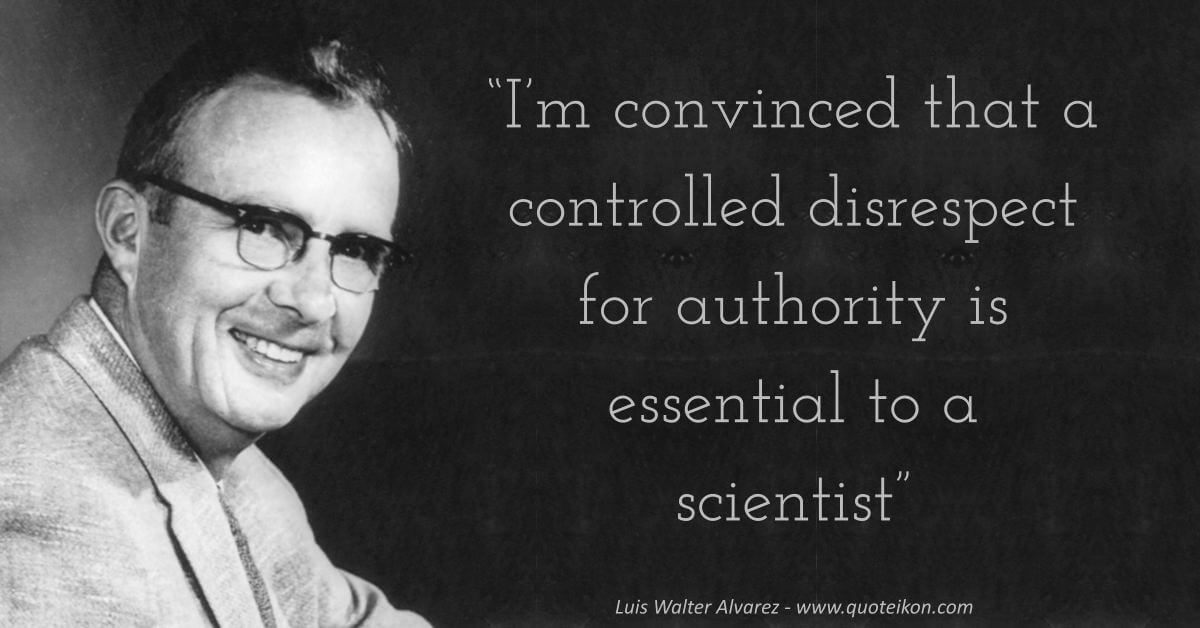