Stories of Keith Moons' excesses are part of the fabric of rock and roll, the bad boy behind the drums of The Who smashed his way through stage sets, hotels and bars to cement his place as legend in the annals of rock and roll history.

His habit of smashing up hotel rooms and throwing TV's out of windows into swimming pools resulted in the band being banned from every Holiday Inn worldwide. The ban stemmed from them smashing up the Flint Michigan Holiday Inn and Keith driving a brand new Lincoln Continental into the swimming pool.

Pete Townshend once reminisced that they got thrown out of every hotel they stayed in and was quoted as saying; "Keith Moon, God rest his soul, once drove his car through the glass doors of a hotel, driving all the way up to the reception desk, got out and asked for the key to his room".

His style of drumming changed the face of rock percussion, the speed and precision of his effervescent and aggressive drumming beat raised the bar and influenced other rock legends such as Jon Bonham of Led Zeppelin fame.

The great characters of life can always be relied on for great one liners and because of their famed status it gives their words more meaning. So here is my compilation of 15 of the best Keith Moon quotes

Roger Daltrey reflected on the legendary drummer: "He was much misunderstood. There was madness in his eyes, but he had sophistication and he had terrible sadness... Keith lived his entire life as a fantasy. He was the funniest man I’ve ever known, but he was also the saddest; I’ve seen Keith in some terrible times. I saw him at his height, but then I saw him at his lowest. Keith is someone I love deeply, but who was a deeply troubled character"

Bassist John Entwistle summed up his abilities: "He made the drums sing. He played every instrument in the band along with us. His breaks were melodic, because he tried to play with everyone in the band at once... We’d need two drummers to replace him"

Rock legend Alice Cooper spoke of his antics: "Nobody could compete with Keith Moon. Think of it this way: about 40 per cent of what you’ve heard about me or Iggy or Ozzy is probably true. Everything you’ve ever heard about Keith Moon is true and you’ve only heard a tenth of it. He’d come to Los Angeles and he’d stay at the house for a week. So I’d go out to a recording session and come back and he would be dressed like a French maid" 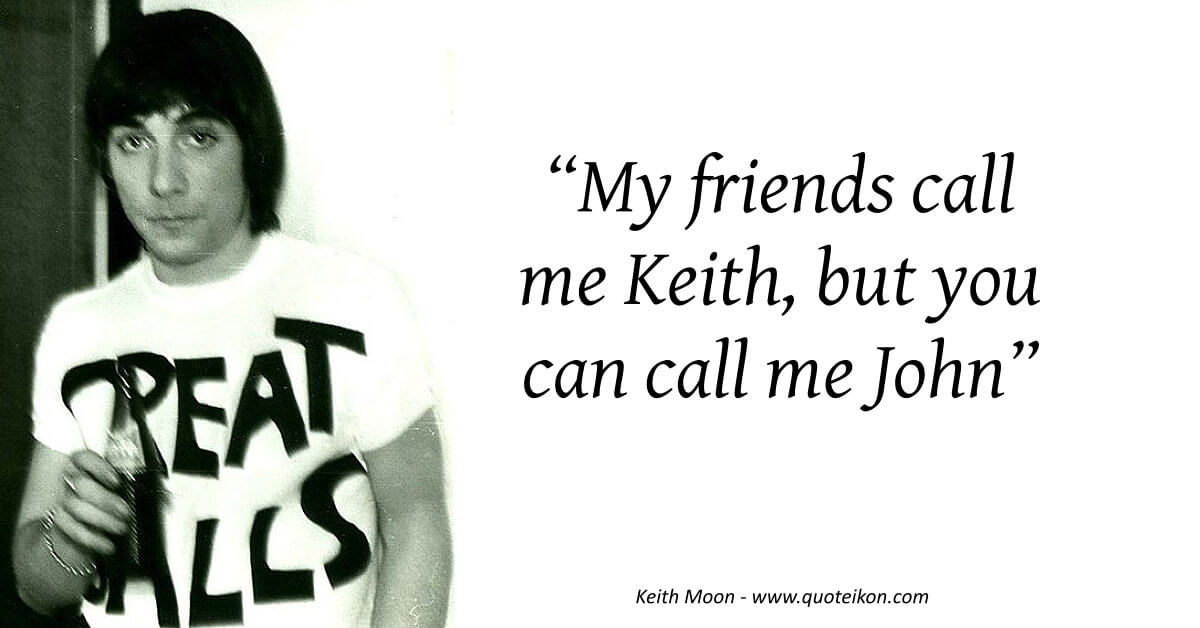