Jimmy Boyles story is as extraordinary as it is inspiring, from plumbing the depths of the notorious Barlinnie prison to a best selling author and world renowned sculptor he has turned his life around in most remarkable fashion imaginable.

Through his art he has become the acceptable face of prison rehabilitation but the authorities were not as impressed and they closed down the 'Special Unit' at Barlinnie Prison that successfully rehabilitated him so he would no longer be a threat to the public. It seemed the authorities were miffed at the way he turned his life around and as Jimmy himself put it: "they didn’t want another Jimmy Boyle".

Although he has been able to put his past behind him on a personal level, the press it seems are more interested in tarnishing any of his successes when they go to print by maintaining the decades old headline that branded him "The Most Violent Man In Britain". With the facts of his notorious case now being common knowledge it grates the authorities that he served a life sentence for a murder he did not commit while not 'grassing' on the real killer.

Since his release he has done a lot of good work for society like helping released prisoners integrate into life on the outside and helping drug addicts. His book 'A Sense Of Freedom' which was written in jail, was a literary sensation and it also made it to the silver screen in the 1979 movie of the same name.

As you would expect from someone who has led such a colourful life he has been known for a few good one liners so this is my compilation of 15 of the best Jimmy Boyle quotes.

The notorious British prisoner Charles Bronson was highly respectful: "Jimmy's a legend to many both inside and outside of prison, he's written books and started up the 'Streets Ahead' scheme in Scotland to help junkies and the like, did a great job. He's now a law abiding and hard working man. He's also probably best known for his sculptures and artwork he produced while in prison. The Krays always spoke highly of him"

The psychiatrist Dr Sarah Trevelyan said of her first meeting before they were to fall in love and marry: "Jimmy was warm hearted and with a lot of integrity and a lot of personal courage. I had to put this together with the fact he had been involved in gangland violence, but I met the Jimmy who he was then, and I didn’t dwell on the past" 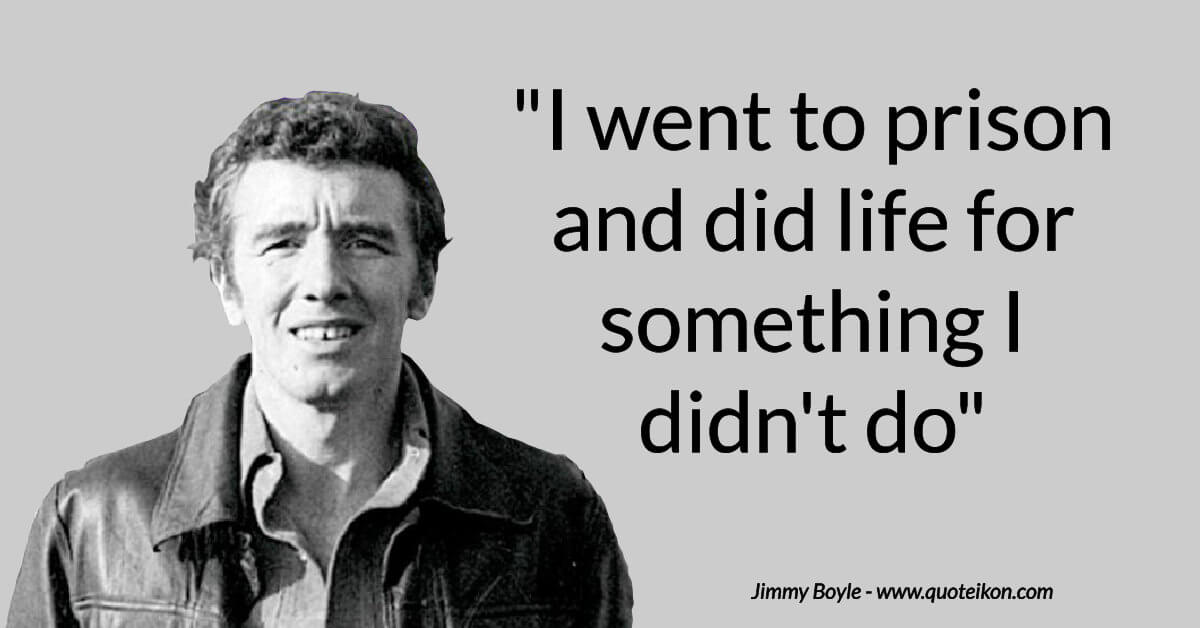