Gustav Mahler was as brash with his baton as he was bold with his bass solo's, yet in his life time he was never appreciated as a composer but he was too talented as a conductor for even the anti-Semitic Europeans to ignore.

He was a musical prodigy that earned a much coveted place in the Vienna Conservatory at the age of 15 and thereafter worked his way up through provincial theatres and opera houses.

As Mahler's reputation as a conductor grew he often rued his Jewish background in an era of anti-Semitism and in 1897 decided to convert to catholicism. Quite whether this was a conversion of convenience or he was moved by the word of god is anyone's guess although it did yield the rather positive prospect of now being eligible for the highest musical post in the Austrian-Hungary empire, that of artistic director of the Vienna Court Opera.

Jews could never be considered for this highly sought after position and it was considered by many as no coincidence that he achieved his ambition of securing this post in the same year of his conversion. He maintained this post for 10 years whilst under constant attack from a hostile press who could not forget his religious background.

Mahler was considered more agnostic to religion but more religious to his devotion to music, perhaps he followed the god of melody rather than any of the gods of biblical times or mans own creation. His career and reputation was made as a conductor and he is considered one of the finest conductors of all time but his passion and devotion went towards being a composer.

As a composer he was never recognised as one of the greats during his lifetime and Gustav Mahler was often quoted as saying: "My time will come". He was right of course, even after his death in 1911 up until the mid twentieth century his music was not popular. After this period many talented musicians championed his work, not least Leonard Bernstein who did more than most to bring it to the public eye.

His works have featured in excess of 100 movies and he has become one of the most frequently performed composers of the latter twentieth and early twenty first centuries. His all action technique with the baton set the tone of conducting up until this day, away from the rostrum he was good for a one liner also, so this is my compilation of 20 of the best Gustav Mahler quotes

Orchestra director Federico Cortese spoke sympathetically of his undoubted talent: "Mahler was at the pinnacle of the pantheon of symphonic music, much more so than Europeans were ready to accept"

The composer Hugo Wolf said appreciatively: "For the first time I have heard The Ring as I have always dreamed of hearing it while reading the score" 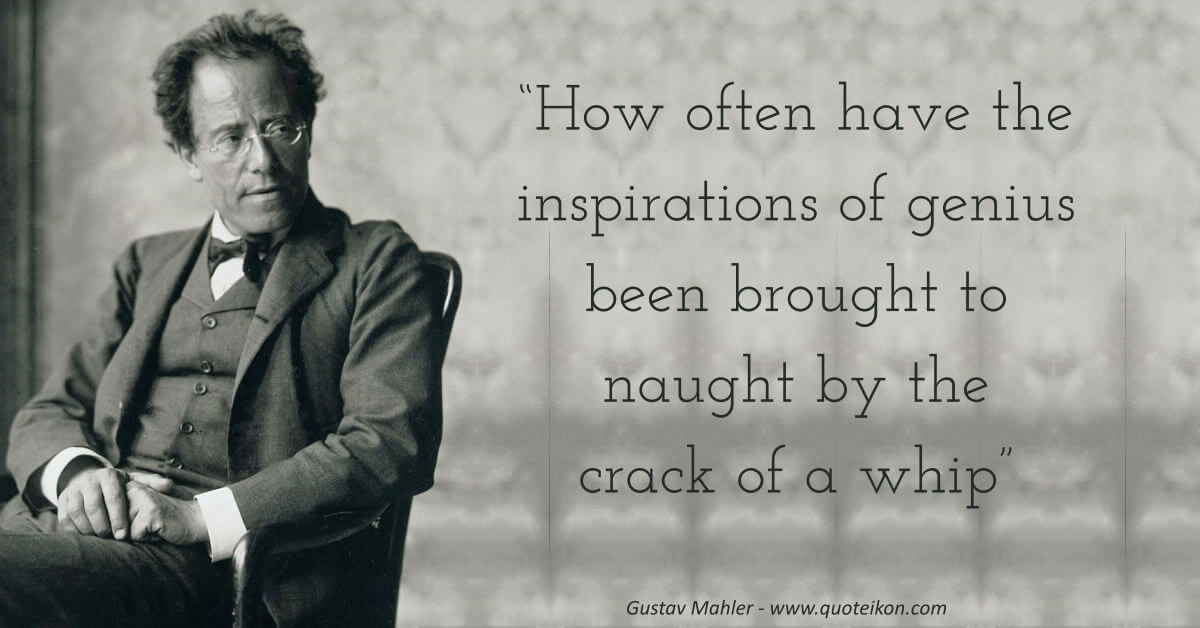